Next door Nepal: Blaming the neighbour

Efforts to resolve the India-Nepal crisis are still half-hearted 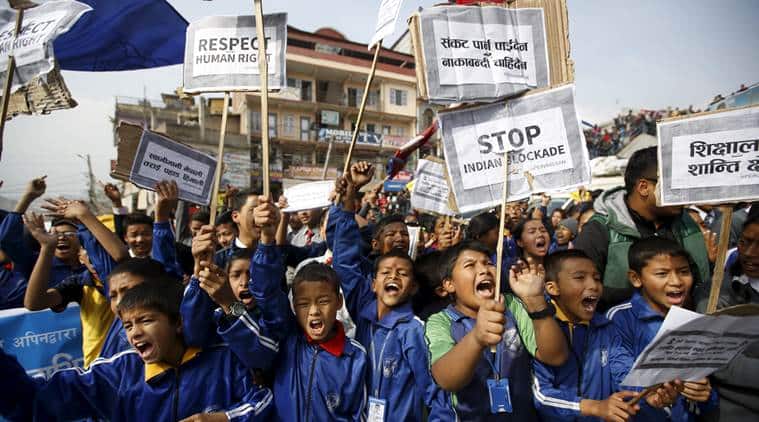 The middle hills and the capital Kathmandu have suffered fuel and cooking gas shortages after protesters in the south switched to blocking supplies from India, Nepal’s largest trading partner, almost two months ago. (Source: Reuters)

In all likelihood, the blockade that Nepal has been facing since September 23 is going to continue for some time. Prime Minister K.P. Sharma Oli has been telling people that while he has been trying his level best to reason with India that the inadequacies in Nepal’s constitution, if any, should best be left to the Nepalese to sort out, they should remain prepared for a prolonged shortage of essential commodities.

Officially, India has asked Nepal to deal with the agitating Madhesi leaders politically and address the issue of “discrimination” they have raised. India has also assured Nepal of lifting the blockade soon after the agitating groups vacate the no-man’s land along the border. Nepal’s authorities are, however, deeply suspicious about India’s intent. China seems to have favourably responded to Nepal’s request to open another six, in addition to the existing two, checkposts in order to address the situation.

Senior RSS and BJP leaders in New Delhi recently appraised the Nepal situation and China’s growing popularity, as well as anti-India sentiments in Nepal. At present, most children are told, not only in school by the government but at home as well, that it’s “India and Narendra Modi” who are responsible for their not being able to go to school. While past standoffs between the two neighbours had remained confined to senior politicians and bureaucrats, the anti-India feeling this time has gone deep into the minds of children. Yet, the attempt to resolve the crisis appears only half-hearted.

Nepali leaders, including the Maoists and Oli, have asked India at various levels to stop interfering in Nepal. They hesitate to admit that it was the India-brokered deal in November 2005 that brought about the key political changes in the country in early 2006 that catapulted them to power. While politicians were debating how to involve people in settling the issue of monarchy vs republicanism, Nepal’s leaders faced enormous pressure from their Maoist friends and the Indian embassy in Kathmandu (all closely working with the government of India) to settle the issue immediately. In their haste, Nepal’s leaders chose not to involve the people. They even decided to forego the normal parliamentary process followed by any debate in deciding why Nepal should be republican and secular. India was in a hurry to recognise and welcome these changes.

But Delhi’s cold response to the promulgation of the new constitution on September 20 juxtaposed against its hurried welcome for the changes in 2006 has caused a bigger controversy. In fact, that section of the Indian bureaucracy — leftist groups and some intellectuals who have throughout maintained close links with Nepal’s pro-republican and secular actors — even now form a solid anti-Modi plank.

Nepal’s evolution as a modern nation-state, even during the 44 years as a Hindu kingdom till May 2006, never witnessed an incident like the Dadri killing, or the Kalburgi murder, or Sudheendra Kulkarni being thrown ink on the face. The “secularists” with a fundamentalist mindset didn’t appreciate this legacy, nor did they show any concern about retaining this secular character of Nepali society. They didn’t anticipate that communal and other forms of emotions could come into play during the switch to secularism. Thus, without a debate, they declared Nepal a secular country.

Now, India is being blamed for interference, as always, but Nepal’s actors are selective about issues and their timing. Modi and the BJP may be more stridently targeted because Nepal’s politicians are in regular contact with the Indian bureaucracy, leftist groups and the Congress party.

While the blockade has affected the general life and economy of Nepal, with Modi being painted as the villain, the much larger question Nepal’s actors have not yet even begun debating is what Kathmandu should do with the outcome of the India-brokered deal in 2005. The current standoff is only a manifestation of India not knowing where and when to stop, even when there were clear signs of India’s role being counter-productive.