Traditional redistribution, which aims to deliver on intangibles like health and education, has ceded to a distinctive ‘New Welfarism’, where Centre is demonstrably providing tangible essentials to citizens 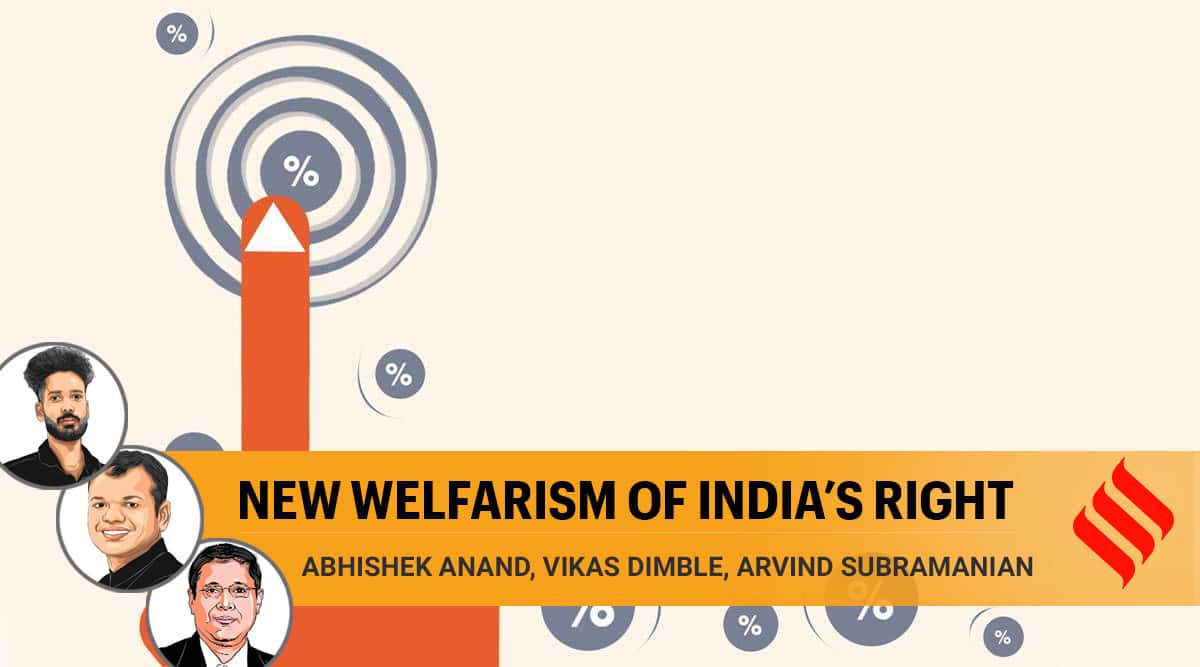 New Welfarism’s calculation is that there is rich electoral opportunity in providing tangible goods and services, which are relatively straightforward to deliver, measure and monitor. (Illustration by C R Sasikumar)

The recently released fifth round of the National Family Health Survey (NFHS-5) provides reliable and independent evidence to assess micro-development performance under this government. The survey covers many dimensions of health, nutrition, and the overall quality of lives. Here we focus on one that government policy has consciously targeted — New Welfarism — and another that was not but has been of long-standing interest — the stunting of children. The contrast offers potentially important lessons for the political economy of policy-making and for the state of the economy itself.

The New Welfarism of the Narendra Modi government represents a very distinctive approach to redistribution and inclusion. It does not prioritise the supply of public goods such as basic health and primary education as governments have done around the world historically; it is also somewhat ambivalent about strengthening the safety net which past Indian governments have pursued with mixed success. Instead, it has entailed the subsidised public provision of essential goods and services, normally provided by the private sector, such as bank accounts, cooking gas, toilets, electricity, housing, and more recently water and also plain cash.

Before discussing the findings, several caveats need emphasis. First, since the latest round only has data for 17 states and five Union territories, our findings cover only 54 per cent of India’s population. Madhya Pradesh, Uttar Pradesh, Punjab, Rajasthan and Tamil Nadu are notable exclusions. Second, our findings cover only some government programmes which targeted the provision of women’s bank accounts, electricity, sanitation and cooking fuel, respectively. They do not cover housing for lack of data. Third, even where data are available, they may not capture the granularity of the outcome. For example, “access to power” does not mean families have 24×7 power from the grid; “access to cooking gas” is no guarantee of its daily use. Fourth, even though the New Welfarism was a central government initiative, significant state-level variations suggest that the centre can neither take full credit nor bear all the blame for outcomes.

Figure 1 illustrates the key findings. First, major progress has been made by this government in achieving its New Welfarism. By 2019, 72 per cent of all women had bank or savings accounts that they report as being able to use themselves. Ninety-eight per cent of all households had access to electricity, nearly 70 per cent to improved sanitation, and 60 per cent to clean cooking fuel. 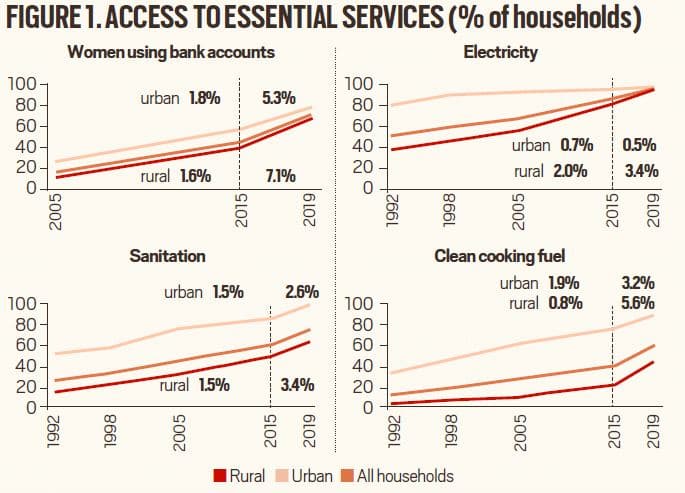 Notes: All the numbers are per cent of households that have access to the good/service in question. Data are for the 5 years ending in the year labelled on the x-axis, with data for other years linearly interpolated. Data are for 15 states for which numbers are available for all the rounds of the NFHS. Data for women’s bank/savings accounts — available only after 2005 — capture financial inclusion and women’s empowerment because they are accounts that women themselves use. Numbers in the charts are the percentage point changes per year of access to households before and after (doted line) 2015.

Second, the pace of improvement, measured as the percentage of households that have gained access to these goods and services each year, has accelerated since 2015 (the lines tilt more sharply upwards). Improvement has been especially marked in rural India.

Perhaps, the most striking change relates to women’s financial inclusion and empowerment. Every year, pre-2015, an additional 1.5 per cent of women in rural areas were acquiring bank or savings accounts that they could themselves use. Post-2015, this rose to 7.1 per cent, a near five-fold increase. In rural Bihar, the number of women with accounts jumped from 6.6 per cent in 2005 to 25 per cent in 2015 to almost 50 per cent in 2019.

Third, performance on some metrics falls short of earlier claims. The clearest example is sanitation: The India-wide average of access to clean sanitation is still a little under 70 per cent, far from the declaration that India is 100 per cent open-defecation free. The Bihar number is only 49 per cent.

Turn next to child stunting, which has long been a major Indian failure of state action and societal inaction. Figure 2 plots stunting rates, defined as when a child’s height-for-age is two standard deviations below the global norm. After showing a slow but steady decline, especially between 2005 and 2015, there has been a disappointing reversal thereafter with overall stunting rates flattening and urban rates rising. And because stunting reflects nutrition, which, in turn, derives from income and consumption, this story — of retrogression, not just stalled progress — is incompatible with a dynamic economy, distributing the benefits of development widely.

What explains the difference between the success of New Welfarism and the failure on stunting?

New Welfarism embodies a vision, both imbued with conviction and laden with calculation. The conviction is that providing these goods and services will make a critical difference to the lives of the poor. Indeed, New Welfarism recalls the Basic Needs approach to development that was in intellectual vogue several decades ago. The conviction also stems from a belief that the power of technology can be harnessed to achieve successful implementation.

New Welfarism’s calculation is that there is rich electoral opportunity in providing tangible goods and services, which are relatively straightforward to deliver, measure and monitor. Traditional government services such as primary education are intangible, which are difficult even to define, much less measure. But when the government promises toilets, for example, everyone can monitor progress. Either a toilet has been installed, or it has not.

Opportunity is also spotted in providing benefits that can be delivered in the political present as opposed to intangibles that might accrue at some more distant point in time. Critical to exploiting that opportunity is ensuring that deliverables can be attributed to the Union government. To this end, the central implementation machinery (the bureaucracy and banks) is deployed as much as possible. And to erase any doubt about the source of the benefits, the policy is backed up by strong and persistent messaging, highlighting the achievements and the benefactor.

In contrast, improving child nutrition is precisely the sort of intangible benefit that is difficult to achieve, measure or monitor. Households cannot easily see whether and to what extent better nutrition has been provided; its benefits, embodied in happier, healthier and cognitively stronger children, are even less clearly discernible. Moreover, better nutrition takes time and patience to deliver. And many factors beyond state-directed efforts are necessary for proper nutrition. In particular, families need a broader macro-economic environment of robust growth of income, purchasing power and consumption.

So, two conclusions might be drawn from this tale of two outcomes. First, governments need visions — both substantive and political. Second, some outcomes require direct, relatively easy action (like delivering tangible goods and services) but others will be more difficult, requiring above all a dynamic economy, and a conception of the policies and institutions that will support it.

In some ways, this Indian experience is consistent with a broader global trend (Poland, Hungary and Turkey). Even without delivering broad-based prosperity, populist leaders and parties are finding electoral success through a potent, new cocktail: Leveraging the identity politics of the right, embracing tepidly, even rejecting, the market-focused neo-liberalism of the centre, and appropriating the redistributive economics of the left. Except that in India today, traditional redistribution (strong safety nets or improved public good provision) has ceded to a distinctive New Welfarism, where the central government is demonstrably and effectively providing tangible essentials to its citizens.

This article first appeared in the print edition on December 22, 2020 under the title “New welfarism of India’s Right”.  Anand is graduate student at Harvard Kennedy School, Dimble is deputy director, Ashoka Centre for Economic Policy and Subramanian is professor, Ashoka University

Delhi Confidential: Others In A Spot 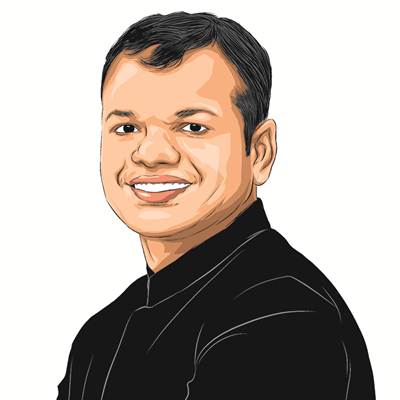 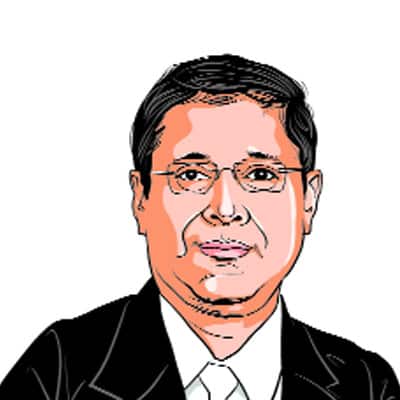