Tavleen Singh writes: What we need is not Opposition ‘unity’ but some idea of what a united Opposition will offer economically and politically that they have not offered us before. 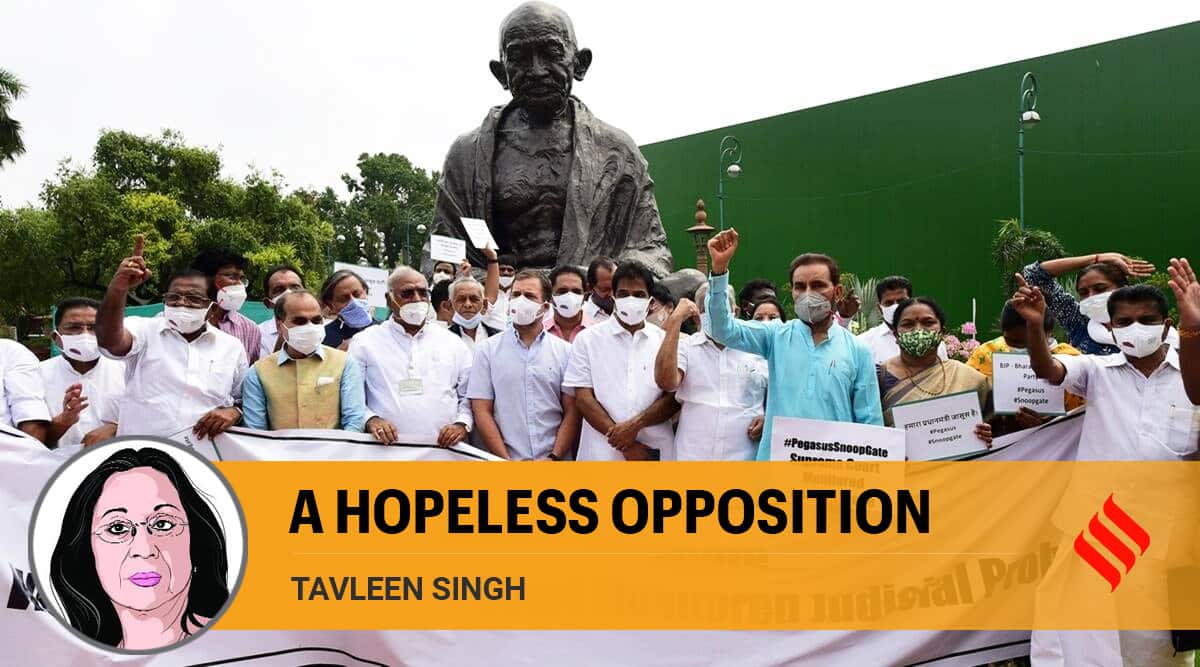 This is the first session of Parliament since the second Covid wave that made millions of Indians understand the catastrophic consequences of governmental ineptitude.

As a former ‘bhakt’ or devotee of Narendra Modi, I am often asked by readers of this column and sundry trolls why I lost faith in him. Mean-spirited trolls taunt me about having stopped being a ‘bhakt’ only because he exiled my son. The pain this caused is deep. There can be no normal parent who should find this hard to understand. But, there are serious political and economic reasons why I am no longer a devotee.

Of the political reasons, the most important is that Modi has failed to change the culture of Lutyens Delhi. He could have done this by making his team understand that they are elected representatives of the people of India, not colonial rulers. The quickest way to do this would be to kick them out of their palatial residences and make them live like the people they represent. On the economic front, I am disappointed that Modi has not taken India in the new direction he promised. He has proved to be an obsessive central planner and statist. Then there is the criminal incompetence his government showed during Covid’s devastating second wave.

Having said this, I admit that now and then a moment comes when I am reminded why millions of Indians voted for him not once but twice. Also, why they may perhaps forgive him for vanishing when the second wave was at its horrendous peak. And, for not ordering vaccinations when they should have been ordered. Last week came one such moment. It was a week when we saw more Opposition leaders than we have in a while and with every word they uttered they made it clear that they have learned nothing in the past seven years.

Rahul Gandhi appeared with a group of Opposition MPs outside Parliament. He stood in the rain and in his inimitable style declared that Modi has ‘put a weapon in your phone’. There is no question that using Pegasus to spy on dissidents and Opposition leaders is a bad thing, but surely the most important issue continues to be the terrible mistakes made in the handling of Covid?

This is the first session of Parliament since the second Covid wave that made millions of Indians understand the catastrophic consequences of governmental ineptitude. So, should Rahul Gandhi not have been inside the Lok Sabha asking questions? There are questions that the Prime Minister would find hard to answer. Why did people die because hospitals ran out of oxygen? Is this not murder? Why did the Prime Minister and the Home Minister vanish when they were needed most? Why is India still dangerously short of vaccines? Is it because the Opposition leaders have failed in their role that the Prime Minister is able to slither out of his worst governance crisis?

Not only has he brazenly declared that no mistakes were made by his government and that this is a ‘false narrative’ being spread by his opponents, but his publicists have plastered Delhi with huge posters that say ‘Dhanyavaad Modi’. These words appear beside his bearded, smiling face and the thanks are supposedly for his having made vaccinations free for every Indian citizen. But where are the vaccines? By when can we expect 70 per cent of adult Indians to have received both shots? Why do vaccination centres in Delhi and Mumbai run out of vaccine stocks every other day? These are questions that should have been asked in Parliament.

If Rahul Gandhi’s performance in the rain was not dismal enough, along came Mamata Banerjee radiant with victory. She said she came to Delhi to meet Opposition leaders to urge them to unite so that they can defeat the BJP in the next general election. How many times have we heard this before? How many times have we seen them gather on some stage and hold hands to show how united they are? What we need is not Opposition ‘unity’ but some idea of what a united Opposition will offer economically and politically that they have not offered us before.

Modi has won two general elections because the men he defeated offered the people of India hereditary democracy and ‘socialist’ economic policies. These two ideas have combined to keep millions of Indians mired in extreme poverty. After winning his second term Modi has made grave mistakes and shown a vainglorious side that is quite absurd. His picture on vaccination certificates is one of the more farcical examples of his narcissism. It is getting Indians travelling abroad into embarrassing situations. A friend had problems at Frankfurt airport recently because when he produced his vaccination certificate the immigration official looked at the Prime Minister’s picture and said firmly, ‘This is not you’. When he explained that it was the Indian Prime Minister’s picture, the official became more suspicious and demanded to know why it was there at all. Vaccination certificates in most countries are the size of large visiting cards with only essential details like when which shots were given and when the next ones are due.

Modi’s government has spent more time devising elaborate certificates and websites than on ordering vaccines. This is not just criminal negligence but criminal stupidity, but our Opposition leaders seem more concerned about their telephones being used to spy on them. And the truth is that ordinary Indians could not care less. When will our Opposition leaders discover that they have lost the plot?