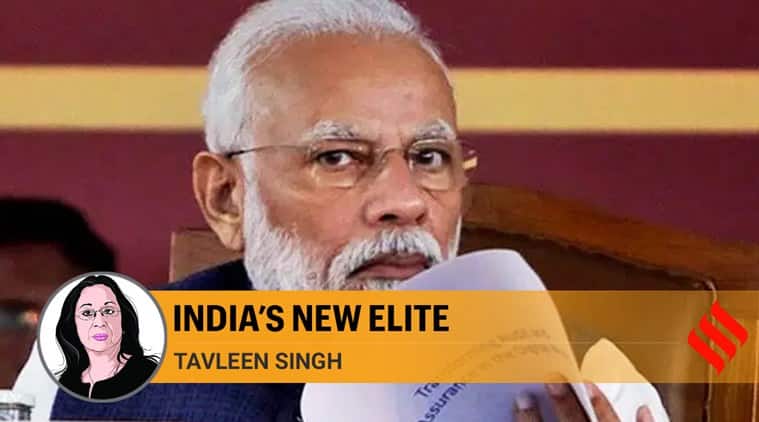 On social media, an army of vicious BJP trolls, led by truly venomous women, use this word daily to attack anyone who is seen as a critic of Modi or the new elite.

Only once have I been invited to meet Narendra Modi without seeking an audience. It was because of a piece I wrote in this column in the summer of 2013, when it was becoming clear to me that he could become prime minister. This possibility was also becoming clear to people in the highest echelons of political power and this made them nervous. I wrote that they were frightened that if Modi breached the walls of privilege that shield Lutyens Delhi from ordinary Indians, he would take away their privileges and their power. I believed then that he would rid this privileged enclave of the officials (elected and unelected) who squat there at our expense. And, force them to live less like colonial rulers.

It was the first time as far as I know that the word Lutyens was used as a metaphor for entitlement and political power.

The day after the article appeared, I got a call from Gandhinagar informing me that the chief minister of Gujarat would like to see me. It was an order I could not disobey, so I went and met the man who would be prime minister. We talked for more than an hour, during the course of which the article came up. He said he had enjoyed reading it because although he had worked and lived in Delhi, he had remained an outsider.

It saddens me that he has done nothing to change Lutyens Delhi. It remains the crucible of political power it has always been. But, there is now a new elite in residence whose supporters have turned the word Lutyens (Lootyens as they call it) into a term of abuse.

On social media, an army of vicious BJP trolls, led by truly venomous women, use this word daily to attack anyone who is seen as a critic of Modi or the new elite. Anyone associated with the old India is reviled for being ‘Lootyens’. But, what this caboodle of raging, ranting, vindictive trolls has not noticed is that Lutyens Delhi now belongs to their heroes. A new political elite has taken the place of the old and this new elite continues to live in the style of colonial rulers.

But, Modi has brought real ‘parivartan’ that has gone almost unobserved. The change has become more evident after he won his second term because the new elite has now taken full charge of the India story. So it is time to understand who this new elite is and what its values are. Unlike the old elite, that was generally upper class and upper caste, the new elite is entirely of lower origins and caste. It is defined by its reverence for Modi, a new set of values and a deep hatred of people they believe have done well only because of privilege.

So what is it that they want? What are the changes that they would like to see happen in Modi’s ‘new India’? The first change, and possibly the one they consider most important, is for India to make it clear that it is a Hindu country, and in practice what this means is that Muslims must get used to living as citizens of a lesser kind.

When the Home Minister, who is the real face now of the Modi government, explained in detail that refugees of every faith would be granted Indian citizenship except those who belonged to the Islamic faith, he was making a very deliberate distinction.

What then are the values of this new elite? The founding value is ‘Hindu nationalism’. This translates politically as not criticising Modi or his policies (especially on Kashmir) because to do this is to criticise India and this, in their view, is tantamount to supporting ‘jihadist’ Pakistan. The new elite has utter disdain for such ‘western’ habits as eating meat and drinking wine. It also has utter disdain for reading books that come from foreign lands. The only books, languages, history and religions that they consider worthwhile are those they believe come from ‘Indic’ sources. They believe that India will only prosper when their interpretation of ‘Indic’ values is imposed upon Indians, and these pivot around their version of Hinduism which in fact more resembles Islam than the Sanatan Dharma.

So Modi has fulfilled his promise of bringing ‘parivartan’, of this there is no question.

Maharashtra wakes up to Fadnavis as CM, with a Pawar as his deputy