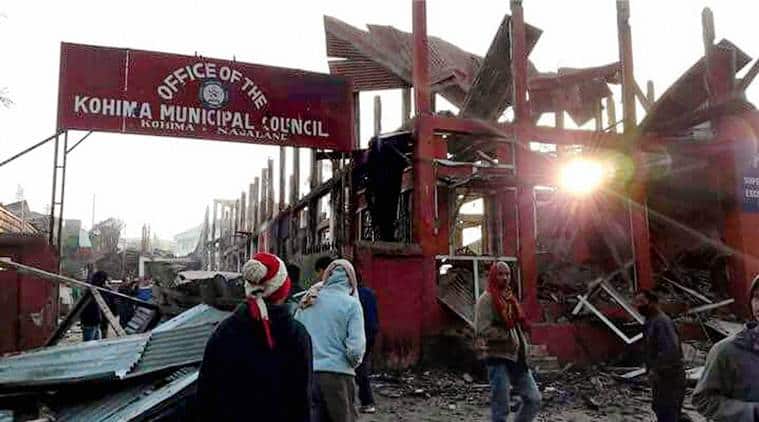 Kohima: The Kohima Municipal Council office which was set ablaze by Naga tribals during their violent protest, in Kohima on Friday. (PTI Photo)

To understand the vehement opposition to 33 per cent women’s reservation in urban local bodies (ULBs) in Nagaland by male-dominated/all-male Naga tribal bodies, it is imperative that all illusions about tribal society being simple are dispelled. In the case of the Nagas, it is even more multi-faceted for historical and political reasons. Now, with rapidly changing national and global economic eco-systems, in a patriarchal society with one foot still in the subsistence economy, economic apprehensions have impacted political perspectives.

Opposition to women’s participation in decision-making bodies and processes is centuries-old in Naga society. Our customary laws are deeply rooted in patriarchy. So for Naga tribal bodies to naively argue that such reservations violate Article 371 (A) of the Constitution of India and would adversely affect Naga culture and customs would be to miss the point of the argument against reservations. The core of the issue — like most other issues — is the ownership of land and resources.

Naga culture and customs debar women from land ownership; hence our customary laws preclude women from inheriting land. This is exactly what Article 371 (A) protects — the social, cultural and customary practices of the Nagas, which are germane to land ownership and inheritance thereof. Much as Naga scholars acclaim Nagas’ “purest form of democracy” in sovereign village-republics and compare it to the “democracy” of the Greek city-states, the fact is, this “democracy” is pertinent only to males — only males have the right to land ownership; only males can participate in the village parliament. It’s patriarchy in its purest form, actually.

In the opposition to women’s reservation in ULBs, the most pertinent aspect is the economic connotations inherent in politically empowering women through reservations. The bottomline is: Economics spawns and dictates cultures and customs, as also political and marital expediencies.

Against this background, Naga male-dominated tribal bodies’ opposition to women’s reservations in ULBs is understandable — the fear is that women would finally have a say in how resources are used and shared in towns, which could then spill over to villages. So far, only men are privy to the utilisation and sharing of resources allotted by the Central and state governments, as also available resources of clan and tribe land ownership. With political powers come economic powers, and with economic powers, political power is reinforced and consolidated, all of which has the potential to disrupt the status quo in Naga society that has marginalised women politically and economically.

Women’s reservation is necessitated in patriarchal societies because of the historical fact of a ubiquitous culture of inequality in Naga society — even if we don’t practice dowry, Sati, female foeticide and infanticide and the caste system. All patriarchal societies and states deny women access to economic and political powers, starting with land ownership, the primary marker of power hierarchies. The opposition to women’s reservation in ULBs not only underlines the badly bruised Naga male ego, but has critical economic connotations accentuating how their economic and political strongholds are perceived to be threatened.

It must also be underlined that almost all Naga tribal bodies, including the Naga Hoho, emerged since the 1980s and thereafter — therefore, they are not Naga traditional institutions. The traditional Naga institutions recognised by the British and by the Indian government, which have constitutional sanction (enshrined in Article 371 (A)), are the Naga village parliaments, which are the custodians of Naga culture, traditions and customary laws. Therefore, it is a matter of concern that the Nagaland government has allowed itself to be held to ransom by NGOs and civil society bodies at the cost of the constitutional mandate in the name of Naga culture, tradition and customs.

Apprehensions related to taxes and land ownership are very real. Under the Nagaland Municipal (Third Amendment) Bill 2016 was the issue of taxation by the new municipalities/town committees, particularly if Smart Cities and Special Purpose Vehicles (SPV) are involved. As Charles Chase, former editor and author of The Naga Imbroglio writes: “Taxation has always been an abhorrent issue where Nagas are concerned”. As I see it, the problem here is that Naga males are averse to the idea of mainstreaming into the globalised economy but they welcome the privileges of the same globalised economy.

That brings us to the next point of Naga male tribal bodies’ opposition to women’s reservation. Because of being precluded from inheriting land, Naga women have taken to education with missionary zeal. Today, Naga women excel in the public and private spheres academically, intellectually and to a certain extent economically — this is frightening to the Naga male, who continues to expect the woman to be dependent on him. While Naga women are respectful towards Naga culture, tradition and customary law, they are also generally more open, willing and able to adapt to new ideas and change and generally to global culture, politically, economically and socially. The new Naga woman is very different from our subservient grandmothers, which is truly frightening to the Naga male, who has failed to and/or refuses to understand and appreciate how much the world has changed from the days of British colonials and American missionaries. Significantly, some statistics maintain that more than 50 per cent of Nagaland government employees are women.

There is also a fear among Naga males that the Indian government is trying to introduce alien political and economic systems, which would adversely tell on Naga nationalism, even dilute it. Here again, the diverse perspectives of Nagas belonging to various political, economic, social and educational backgrounds are at play.

The abysmal failure of the Nagaland government and the state machinery to stem violent protests against women’s reservation must be underlined. The Nagaland government’s vacillating stand on women’s reservation over the years poured fuel into the fire, as much as its inability to gauge the mood of tribal bodies and their vulnerability to numerous shades of overground and subterranean political agendas, in the name of Naga culture, customs and traditions, and a failure to maintain the rule of law by an ineffectual civil and police bureaucratic machinery.

The ULB elections have been deferred and it is likely that women’s reservation to ULBs will never come to pass. But it is clear from what happened in the last few days that the state government and the tribal bodies have lost the plot.

The ball is in the Centre’s court, seeing that the Nagaland government and Naga tribal bodies are seeking no less than an amendment to certain parts of Part IX-A of the Constitution. Meanwhile, Naga women will continue to struggle for their rights unambiguously enshrined in the Constitution of India. 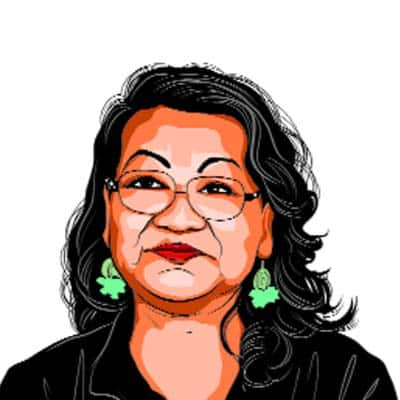