A R Vasavi writes: It needs reforms that will revive the health of its soil and water resources, provide employment for people and enhance quality of life 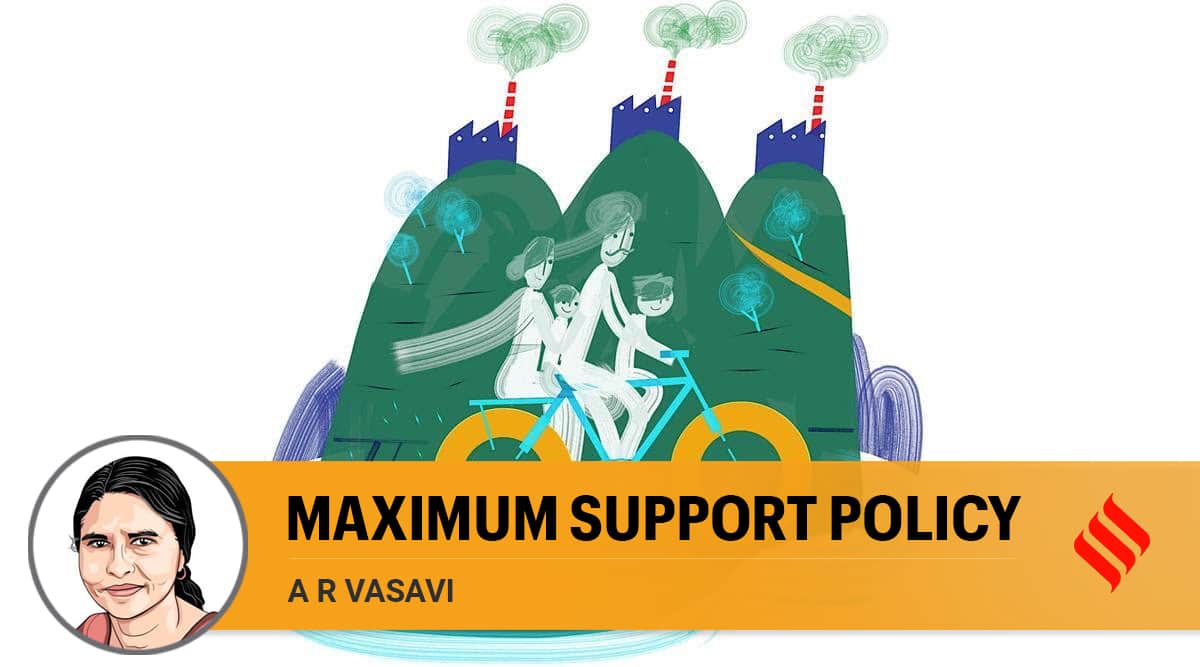 The issue of “minimum support price” (MSP) for key agricultural commodities has been a persistent sticking point in the negotiations between the government and the farmers.

In the historic withdrawal of the three farm Acts, in the success of the resilience, commitment and sincerity of the Samyukt Kisan Morcha, is our own “David and Goliath” moment. How this initial and significant victory will pan out and what impact it will have, not only on agricultural policies but on how democracy and capital are entangled, will depend on the direction the farmers’ movement takes.

The issue of “minimum support price” (MSP) for key agricultural commodities has been a persistent sticking point in the negotiations between the government and the farmers. The movement’s leaders have demanded the legalisation of MSP, increasing this support price and extending it to all crops while the government has stonewalled such demands. While the issue of MSP relates primarily to cost-effective pricing and is understandably the fulcrum on which agriculture should be assessed as an enterprise, business, or means of livelihood, it may be important to go beyond it.

Much of rural India has largely been neglected economically while also being manipulated for votes. It may, therefore, be time to seek a package of “maximum support policies”. This must emanate from the recognition that mere pricing, marketing and distribution of agricultural products cannot be the panacea for the ailments inflicted on rural India by the larger political economy of the country. Only holistic policies that address the structural inequities, institutional and administrative deficits and political distortions of rural India will provide it a new lease of life.

To begin with, a substantial and phased withdrawal from the Green Revolution model of promoting subsidised agriculture that’s based on the use of industrial chemicals must be initiated. However, the claim that such a shift to “sustainable” agriculture will be via what Prime Minister Narendra Modi (in his speech on November 19) cited as “zero-budget natural farming” is an issue that must be assessed with caution. It will not be apt to have a single model of “natural farming” for India’s diverse agro-climatic cultural zones. Instead, a combination of regionally evolved and established sustainable agro-cultures, that can be tweaked to rid them of their social inequities (such as bonded labour and tenancies) and made amenable to the new climatic trends, is required.

If the PM’s concern for the small and marginal farmers is genuine, then policies to ensure equitable distribution of resources — land as well as water — and access to a range of alternative economic practices and support structures must also be framed. Instead of subsidies (that largely go to non-rural beneficiaries), moratoria on loans and populist pay-outs just before elections, it is imperative that payments be made to promote the spread of “restorative agriculture” — one that regenerates our soil and water resources and promotes seed and agro-biodiversity. A comprehensive programme on these lines will enable not only a transition to sustainable agriculture but also enable people to develop climate change mitigation and adaptation strategies. Supporting farmers to form collectives in which resources, labour, skills and knowledge are pooled for production, value addition and marketing could go a long way in correcting the multiple ways in which they are excluded from profits or gains. Democratisation and decentralisation of agricultural planning can be linked to revitalising ecologically suitable cultivation, facilitating local collection and distribution and sustaining local food cultures that can alleviate malnutrition. A new seed policy, which focuses on enabling local seed banks, can help farmers circumvent the problematic commercial seed industry.

The divide between the rural and agrarian, on the one hand, and the urban and industrial, on the other, is not tenable today. Promoting small-scale industries and processing centres that help rural areas to retain resources and skills along with providing employment is the answer to the vexed issue of unemployment and migration. Rural India requires a new economic deal that addresses past mistakes and heals the wounds caused by years of neglect in healthcare, education and other avenues that enhance the quality of life. Public institutions such as panchayats, anganwadis, schools and primary health centres require urgent reforms that de-bureaucratise state-citizen transactions and ensure that rural residents are treated as citizens, and not supplicants. Instead of the band-aid approaches that seek to alleviate a range of problems caused by structural inequities and disadvantages, we need policies to address caste, ethnic, gender and class inequities.

Since the current political dispensation celebrates and invokes culture and heritage as its legitimising narratives, it would not be out of place for it, and us, to recognise that our myriad and rich agri-cultures were — and can continue to — be the basis of our civilisational identity. Instead of subscribing to alien models of corporatised and industrialised agriculture, whose devastating impacts are manifesting in widespread tragedies across the world, let us reclaim the knowledge heritage — while also eschewing the caste-based social system — of our diverse agri-cultures.

The poet Shiv Sundar has written that tractors have won over the tanks in this year-long stand-off between farmers and the state. Such a victory via non-violent means must enthuse us to intensify our solidarity towards a range of “maximum support policies” for rural and agrarian India. Our first effort should be to petition our respective MPs so that the forthcoming parliamentary session does not see just a recall of the three farm Acts but also paves the way for projects to realise the best for rural India.

This column first appeared in the print edition on November 24, 2021 under the title ‘Maximum Support Policy’. Vasavi, a social anthropologist, is with the Punarchith Collective A R Vasavi<em>The writer, a social anthropologist, is based in Bengaluru.</em>... read more