Mohan Bhagwat has shed Sangh’s traditional reticence. Challenge is to drive his message to the rank and file. 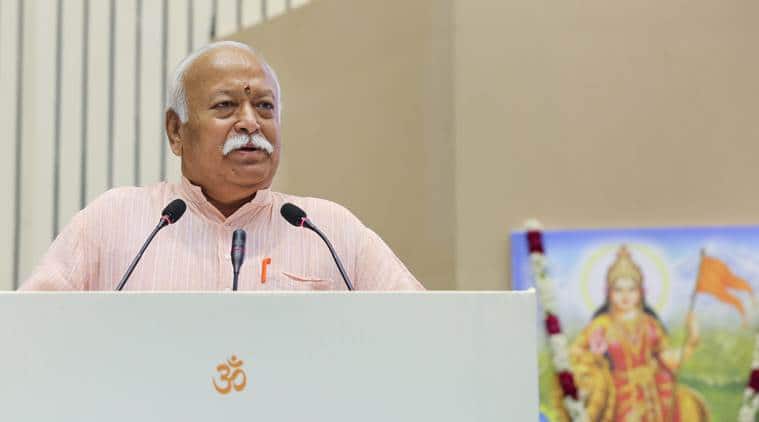 It is a Glasnost moment for the Sangh. In the mid-1980s, Mikhail Gorbachev brought in new “openness” in the thinking and actions of the USSR. He didn’t reject Communism. He insisted that there was a need for more openness and accommodation. Called Glasnost, it revolutionised the politics and geography of Eastern Europe.
What the RSS chief did through his three-day lecture series in the national capital last week is no less significant. With utmost lucidity and disarming honesty, he has certainly won over Lutyens Delhi’s intelligentsia. His lectures, followed by long but equally candid question-answer sessions, have brought in freshness about the understanding of the organisation. Critics were speechless while the sceptics nodded in approval of the many profound statements he made in his speeches.

“The RSS is very difficult to understand and very easy to misunderstand,” a frustrated scholar commented about three decades ago. This frustration was shared not only by those watching the RSS from outside but also by some who observed it from within. The difficulty was largely of the RSS’s own creation. Despite the fact — highlighted by Bhagwat in his speech — that the organisation’s founder, K B Hedgewar, had wanted it to have a publicity wing as early as in 1936, the RSS largely remained a reticent and shy outfit.

“Prasiddhi Pranmukhta,” shunning popularity, is an article of faith for the RSS even to this day. It was practised with much rigour and religiosity in the first six decades. It was only in 1985 — when the organisation celebrated its 60th anniversary and decided to undertake a mass contact programme — did the realisation dawn on the RSS’s leaders that people were largely unaware of the organisation’s inner thinking, even though it had grown into an all-India phenomenon. It endured criticism and ridicule, mostly motivated or ill-informed, but never bothered to respond. An eminent leader once likened the RSS to a tortoise: It would withdraw into its shell when attacked and spread its limbs and start walking again once the attackers left. The result was a campaign of stereotyping and vilification.

The first leader to bring in organisational openness was Balasaheb Deoras, the third RSS chief. Under his leadership, the organisation formally started reaching out to the society at large. Its three important wings — seva or service, sampark or PR and prachar or publicity — were started during that period.

Bhagwat has gone further. His three-day lecture series witnessed significant openness on the important ideological questions that the organisation has been identified with. As an insider, I am privy to the shift in the last decade or so since Bhagwat took over. He has finally spelt out this shift before the countrymen.

The most significant statement was about Hindu Rashtra and Muslims. Bhagwat used a double negative to drive home an important shift. “No Hindu Rashtra without Muslims,” he almost declared. Double negatives help to allow various interpretations. However, the fact remains that it is a significant shift. I recall a question put to one senior RSS functionary sometime in the 1980s — “Why were Muslims and Christians not allowed to join RSS?”. The leader responded with a counter-question — “Do girls schools admit boys?”. “The RSS’s mission is to to unite Hindus. Where is the question of inviting those who are not Hindus — by religion or culture or whatever?” From there to the above statement is quite a journey.

The same holds true for Bhagwat’s candid admission that some statements from Bunch of Thoughts and other publications attributed to Guruji Golwalkar should be seen in the context of his times. In other words, he admitted that some of Golwalkar’s statements were timed out and no longer relevant. This is refreshing openness and intellectual honesty. Gandhiji’s Complete Works have a footnote which insists that if the reader finds any contradiction in Gandhiji’s views, he should go by the latest one — since with time, Gandhiji may have acquired new knowledge and refined his thoughts. Bhagwat suggested that this rationale be applied to the RSS too.

Actually Bunch of Thoughts was a compilation of the speeches delivered by Golwalkar over a period of 33 years as RSS chief. He didn’t author the content, nor did he give the titles. And if one goes through the several volumes of his speeches published a few years ago, one realises that much of the controversy is meaningless. Yet Bhagwat’s admission was an important step to remove misconceptions.

On several other issues too, Bhagwat took a refreshingly new and open stand, surprising many within the Sangh as well. His emphatic stand on the Constitution — he even read out the entire Preamble and averred that the RSS has full respect for it, including the words Secularism and Socialism, inserted during the Emergency — and his stand on the status of women are historic from the RSS perspective. Equality and independence — “samaan aur swatantra” — are the words he used to describe the RSS’ view on women. He even said that the RSS is ready to accept the proposition that “All religions are equal”. Many in the RSS hitherto insist that secularism should mean, “all religions deserve equal respect (sarva panth samaadar) and not, “all religions are equal” (sarva panth samabhav).

Some insiders may insist that there is nothing new in what Bhagwat had said and the organisation had always stood for those values. But there always were two parallel streaks in the organisation. An enigma always surrounded its thinking. Bhagwat decided to shatter that enigma.

This is not an easy transition. There is no doubt that Bhagwat has disarmed most critics through his Glasnost. But driving home the new thinking within the rank and file of the organisation, requires no less than a Perestroika — restructuring. Bhagwat’s challenge lies in that.

“If not me, who? And if not now, when?”, retorted Gorbachev when asked about his reformist zeal. Bhagwat looked equally determined.