The demand is a call for upholding local practices of belonging 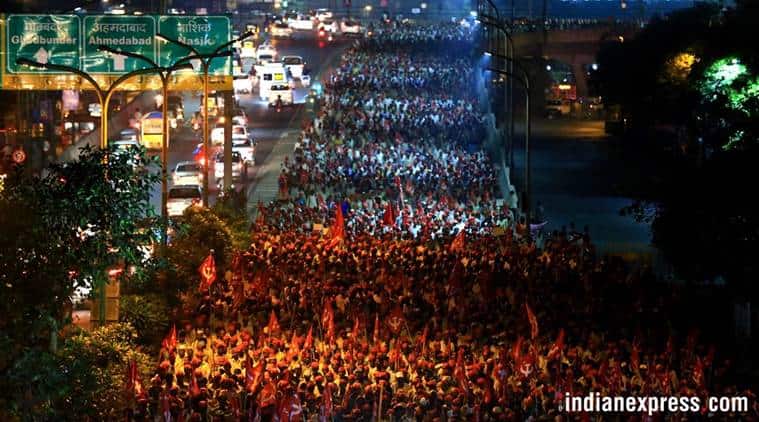 Farmers protest march from Nashik on the way to Mumbai arrives at Thane at late evening on Saturday. (Express photo/Janak Rathod/File)

On March 12, about 50,000 farmers reached Mumbai, walking 165 km in the hope that their elected representatives would listen when they spoke. A majority of these farmers were Adivasis and one of their demands was the implementation of the Forest Rights Act (FRA) and through it, their land rights.

The FRA was enacted in 2006 with the aim of protecting the claims of tribal communities over tracts of land or forests they have inhabited and cultivated for generations. It has the potential to democratise forest governance by recognising community forest resource rights over an estimated 85.6 million acres, thereby empowering over 200 million forest dwellers in over 1,70,000 villages. However, the FRA’s future is precariously balanced between the democratic control and protection of forests on the one hand and rapacious corporations backed by an unscrupulous political class on the other. It has become the site of a deep conflict. That is why it becomes important to understand what is at stake with the FRA.

The FRA has two distinct features. First, it seeks to restore individual and/or community rights of forest dwellers over land and forest resources. These rights include title rights, user rights, forest management rights and relief and development rights. Second, it devolves power to village-level gram sabhas to contest and exclude the alienation of land in the Scheduled areas.

Recourse to the FRA has enabled village and tribal communities in Odisha, Chhattisgarh, Maharashtra, Madhya Pradesh, Rajasthan and Tripura to veto the land-acquisitions claims of corporations and state governments. It expands the mandate of the Fifth and the Sixth Schedules of the Constitution that protect the claims of indigenous communities over tracts of land or forests they inhabit. It shifts the focus from a propertied “owner”, to a space that surrounds the subject and onto the broader networks of relations that interact to form property. It thus gives jurisdiction to a different practice of “belonging”, where the person and her land — the part and the whole — become indistinguishable.

We witnessed the articulation of this “belonging” during our fieldwork in Raigarh and in the testimonies of Dongaria Konds of the Niyamgiri region (Lanjigarh district, Odisha). “Development” cannot be a pre-moulded receptacle devoid of heterogeneous practices and peoples.

In 2013, in compliance with the SC ruling and in observance of the FRA provisions, all 10 selected gram sabhas vetoed the Vedanta bauxite mining project in and around the Niyamgiri mountains. In Kunakadu, a tribal hamlet in Kalahandi, an animated Tunguru Majhi, appointed as observer to the village council proceedings by the SC, spoke for 20 minutes, directing his words at the district judge: “Jharna, pani, paban, patra … sob loss haijibo” (streams, water, air, leaves … everything will be lost).

Niyamgiri is our medical centre, our “jani, bejuni” (village priest and priestess)”. We collect medicinal plants to treat our children. Do understand that the government has no right over these hills. Like the Brahman and the Kayastha worship lord Jagannath, we worship our Niyamraja. We are a “murkhyajati” (illiterate lot) who will never listen to you. In Khambesi, the villagers said: Niyamgiri is our hospital, it gives us medicine. It’s only now that you are saying that you will give us hospitals. Niyamgiri is our God. We won’t give it to anyone.

Similar voices were heard in Raigarh. In March 2016, five Adivasi villages in Tamnar tehsil of Raigarh — Jarridih, Urba, Maduadumar, Pelma and Sakta — unanimously vetoed the plans of SECL and Coal India Limited to acquire their lands and mine their forests. At stake is over 2,000 hectares, including 280 hectares of forests, and lives of 1,250 Adivasi, Dalits and OBC families who stand to be displaced.

In March 2016, at the gram sabha in Pelma, SECL functionaries were greeted with slogans of “Bhoo arjan raddh karo” (cancel land acquisition) and “Khadaan nahin anaaj chahiye” (we want grain, not mines). “We’ve already told you that we don’t want to yield an inch of our land to you,” said Mahesh Rathia, a Rathi adivasi In December 2016, similar narratives of belonging and attachment to land were articulated in Pelma.

Bansidhar Naik, a farmer said, “We do not want to leave our village. The mines will benefit no-one. Our existence will be wiped out. Our village comes under FRA and we vehemently protested against SECL in the gram sabha.” Duble Singh Patel, another farmer from Pelma, said that they refused to buckle under SCEL’s pressure: “We have many benefits from the forest. We get medicinal herbs, fruits and tendu leaves. This clean environment is also because of the forest.”

Such demands for forest rights are a call for upholding local practices of belonging. We need to move away from a discourse of governance that thrives on creating internal colonies and fosters subjecthood rather than citizenship. What kind of a country is it that leaves 50,000 of its poorest farmers with no recourse but to walk 165 km with nothing but hope that their calloused feet and broken bodies may force their compatriots to sit up and take notice of their plight. 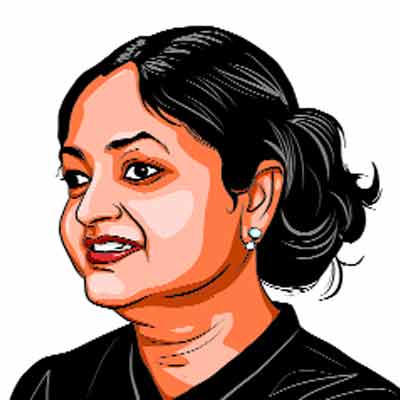