India has seen varying shades of the lives of ascetics. These great men did not live merely for themselves but dedicated their being to society and humanity. Golwalkar is among the foremost symbols of such a selfless life. M S Golwalkar made an unforgettable contribution to society and nation-building, going on to live as an ascetic. (Source: Wikimedia Commons)

Many in India observe February 19 as a day to commemorate a true patriot and one of India’s greatest intellectuals — Madhav Sadashiv Golwalkar.

Golwalkar, fondly remembered as Guruji, dedicated his life to the awakening of nationalistic sentiments rooted in the philosophy of Swami Vivekananda, Ramakrishna Paramahansa and Sri Aurobindo. Guruji made an unforgettable contribution to society and nation-building, going on to live as an ascetic.

India has seen varying shades of the lives of ascetics. These great men did not live merely for themselves but dedicated their being to society and humanity. Guruji is among the foremost symbols of such a selfless life. His entire journey is a tale of the umpteen sacrifices and contributions towards nation-building. Born in 1906, Guruji completed his Masters from Banaras Hindu University (BHU) with a first division. He then took admission in a Chennai institute for research. He was, however, compelled to give up on his research midway because of financial constraints. Subsequently, he began teaching in BHU and soon he became famous as Guruji. While Golwalkar taught at BHU, Pandit Madan Mohan Malviya remained deeply attached to him.

Guruji studied law as well but he remained unhappy with society’s mental weaknesses and the fact that India continued to remain a British colony. It was because of this sadness that Guruji moved towards spirituality under the guidance of Swami Akhandananda, who was a disciple of Ramakrishna Paramahansa. Under Swami Akhandananda’s guidance, Guruji learnt the true meaning and essence of sacrifice and detachment.

He realised that while many sacrifices are acceptable in the Indian tradition, the sacrifice of one’s duty is considered a sin. The real sacrifice, Guruji realised, was foregoing ego and personal desires. In 1937, Guruji was formally ordained by Swami Akhandananda. The same year, Swami Akhandananda gave up his body.

Golwalkar found Keshav Baliram Hedgewar as the ideal person to take forward the Sangh’s work of national and social awakening. Golwalkar said of Hedgewar, “The work of the Sangh head is to prepare swayamsevaks who have the best of characters along with a commitment towards the work assigned to them. They must also be ready to sacrifice their entire lives for the nation. Dr Hedgewar was one who could mould hearts in this way. In the beginning, I only found him to be a leader who worked differently. But later, I realised that he was an image of love, who existed in all three roles of mother, father and guru for his swayamsevaks.”

Guruji was deeply influenced by Hedgewar’s beliefs that while rousing speeches can give us short-term benefits, in the long term, the work of nation-building wasn’t possible without showing humility in speech. So, it is our duty to work for the nation by exercising a strict control over what we say and keeping intact a tenderness of heart and mind.

Opinion: Gandhi’s wariness of RSS’ ideology is clear from his writings, historical record

Guruji was also influenced by Sri Aurobindo’s teaching that for the creator of the universe, Ma Bhagwati, we must become virtuous souls who can spread love and positivity. From this perspective, his nationalism wasn’t one that had ego or tried to rule over people with the use of force. It was a cultural nationalism imbued with spirituality. This nationalism aimed at raising the self-confidence of its people, ushering them to become the best version of themselves and taking India back to its days of glory, when it was the global leader.

He concurred with Vivekananda and Aurobindo that the country wasn’t merely a piece of land or a synonym for political power. She is the mother who nurtures us. In modern times, if we try to understand Guruji’s philosophy, we find that he was imploring us to become the best version of ourselves for the betterment of our country. In Indian tradition, the human being is not supreme. Excellence lies in giving one’s best to the nation. Being grateful to the nation is of prime importance. This should never translate into low self-esteem or weakness.

Guruji considered staying united and powerful to be in the interest of the nation. His understanding of life was immersed in sound logic even as he remained a steadfast idealist. He believed in creating institutions based on the need of the hour and rejected traditions based on superstitions and those that were devoid of logic.

His views on patriarchy are reflected in the incident where his parents told him that what would happen to their lineage if he renounces worldly life despite being their only son. To this, Guruji said that he didn’t believe in the end of family dynasties. He said his aim was the welfare of the society.

Guruji rejected the Varna system as an outdated idea. He was a large-hearted, fearless nationalist. He believed the real worship of God was in human deeds. He did not believe in religious and caste divides. He believed that national unity and integrity lay in people respecting the national mission, goals and cultural symbols.

India today, more than ever, needs to revisit Golwalkar and his teachings to realise its full potential.

This article first appeared in the print edition on February 18, 2020 under the title “Ascetic nationalist”. The writer is national general secretary, BJP and a Rajya Sabha MP.

Opinion: The meeting with Golwalkar: What Gandhi really said

Contest in US and elsewhere is between democracy and capitalism, and where the balance should lie 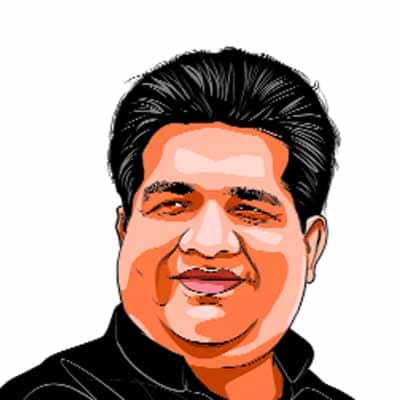