There may not be a word for lynching in most Indian languages. We need one.

It is strange because it is new. Always. Even after 4,743 bodies — the number of people lynched between 1882 and 1968 in the United States, as estimated by the NAACP, the National Association for the Advancement of Colored People. 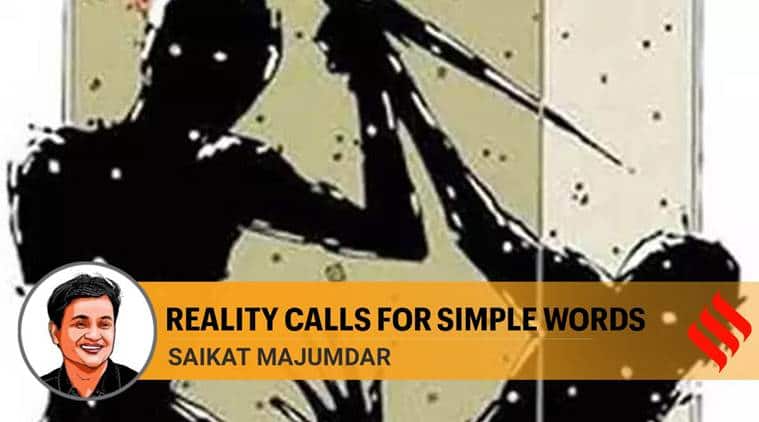 “Lynch” came from the phrase “Lynch Law,” which was a term for this method of “execution” without trial. The two brothers who lent their names to this phrase were Charles and William Lynch, who lived in Virginia in the 1780s.

“Southern trees bear a strange fruit,” sang Billie Holiday, “Blood on the leaves and blood at the root.” What is this strange fruit? Quickly, we get the answer: “Black bodies swingin’ in the Southern breeze/ Strange fruit hangin’ from the poplar trees”

It is strange fruit. It is strange, of course, because it is no fruit. They are corpses of murdered black men. But it is also strange because that’s not where you expect corpses to be. In battlefields, yes. On the roadside, maybe. In the gutter, perhaps.

Corpses are not meant to fly in the sky. Hang from trees in droves. That is almost as terrifying as the marching Birnam Wood was to a villainous Macbeth.

It is strange because it is new. Always. Even after 4,743 bodies — the number of people lynched between 1882 and 1968 in the United States, as estimated by the NAACP, the National Association for the Advancement of Colored People.

The “pastoral scene of the gallant South,” in Holiday’s haunting words, was split open by “the bulgin’ eyes and the twisted mouth” of destroyed black bodies, the “scent of magnolias sweet and fresh” suddenly ripped apart by “the sudden smell of burnin’ flesh.”

But soon, that which is not a fruit becomes one. It suffers the fate of being eaten by birds, flooded by rains, pushed around by the wind, wizened by the sun. In the end, “for the tree to drop.” “Here is a fruit for the crows to pluck/For the rain to gather

For the wind to suck/For the sun to rot/For the tree to drop”./Finally, it becomes crop. /But what a crop! “Here is a strange and bitter crop”.

Outlandish no more, the metaphor enters reality. The English language too, gets a new word: Lynching.

It is a word that is most directly associated with the planned but extrajudicial murder of African-American people in the American south, carried out by white groups in public. The alleged crimes were anything from resistance to slavery, attempt to escape to freedom, to charges of sedition to perceptions of threats to white property or person, including sexual threats to white women. As with most of the crimes oppressed and enslaved blacks were accused of committing, most of the alleged violations that led to lynching were unfounded or greatly exaggerated.

“Lynch” came from the phrase “Lynch Law,” which was a term for this method of “execution” without trial. The two brothers who lent their names to this phrase were Charles and William Lynch, who lived in Virginia in the 1780s.

The claim made this week by the RSS chief, Mohan Bhagwat, that “lynching” isn’t an Indian word has rocked the nation. The uproar isn’t just about language — the assumption lurking under this claim, that the practice of lynching too, is alien to India, is what has taken the nation by storm, most of all, people with conscience who have been tormented by the spate of execution-style murders by frenzied mobs, in most instances, of members of minority groups perceived to have violated customs and beliefs held by the mainstream.
I have to say that Bhagwat is right.

Growing up speaking Bangla, I knew the word “gonodholai,” public thrashing, the kind that a pickpocket might get if caught in a crowded bus. But every Bengali knows that the word is actually meant to be funny — the kind reserved for the blasphemer who badmouths Rabindranath or Satyajit Ray on a Calcutta street, rather than a real criminal — though we all know many a pickpocket has been treated to its flavour in public as well.

The word in Hindi that the internet keeps suggesting as its equivalent is “hatya”. But “hatya” — murder in most Sanskrit-derived Indian languages — is nothing like a pre-planned, extra-judicial murder by a mob, especially that of a member of a disempowered minority.

Does reality create language? Or does language create reality? Thinkers as varied as Ludwig Wittgenstein and Jacques Lacan would have us believe the latter. But reality is always calling out for new words to be added to our dictionaries. “Twerk”, “derp”, “selfie”, “phablet” were all added in the last few years to articulate aspects of contemporary digital culture. Sometimes, as with “mansplaining”, it is the work of a new political conscience.

This is what my colleague, the literary scholar and translator Rita Kothari, had to say in her recent social media post: “Should we then create a tatsam Sanskrit word for ‘lynching’ so that Mr. Bhagwat is truly convinced of it as a reality? Or should he wonder why we have not needed to use this word before? This business of words signalling realities that existed is used so conveniently by different sections. And states of feeling that have no name must wait till we have named them. Language was not an already formed mansion in which we went to live; it is rather a house in the making that exists in and through incompleteness.”

This is why the fruit was strange in Holiday’s song. Its corporeality was strange on the trees. Abel Meerapol wrote it as a poem in 1937. Holiday sang it in 1939. Most instances of lynching occurred in the US at the turn of the century. But the NAACP records cases of lynching happening as late as in 1968.

The word “lynching” was coined in the 18th century American South in the sense of a legal term. Extra-judicial or not, the contemporary white sensibility perceived it as more or less a legitimate, if not a legal action. In the 1930s, with the success of the Civil Rights movement still three decades away, bleeding black bodies on southern trees became strange fruit again. Strange, but real.

Reality calls out for metaphors. Sometimes, it calls out for simple words with straight meanings. There may not be a word for “lynching” yet in most Indian languages. But finally we have arrived in an India where we need one.

The writer is a professor of English and creative writing at Ashoka University. His most recent book is the novel The Scent of God

Tripura: Despite denial by Bru organisations, 54 refugees return to Mizoram