Next step to clean fuel Our evidence strongly suggests a need for refocusing the ongoing campaigns on information about the important health benefits of cooking with LPG, alongside these other complementary activities.

Recently, there has been a considerable reduction in the prices of non-subsidised LPG cylinders. Unless LPG subsidies suffer from extreme mis-targeting, it should rather be the price on the subsidised market that matters for the poor. This price has hardly changed. If the main objective is to help the poor to switch from cooking with cow dung and firewood to the more healthy alternative of LPG, other factors are also relevant. Research suggests that simply informing people about the deadly effects of smoke from the chulha may significantly influence their behaviour.

The World Health Organisation (WHO) attributes about one million deaths (annually) to the use of solid cooking fuels in India. The Pradhan Mantri Ujjwala Yojana (PMUY) seeks to promote the use of LPG as a clean alternative. Launched in 2016, the programme claims success in providing LPG connections to over 60 million poor households. This is an important first step towards the switch to clean cooking fuels. However, substantial numbers of rural households with LPG connections continue to rely on solid biomass for cooking as a primary fuel. Understandably, the concern now is to enhance consumption of LPG in such homes.

Our study carried out in the framework of the Indo-Swiss Joint Research Programme in the Social Sciences sheds light on promising pathways to support the fuel switch. It focused on the impact of providing information on the health-related ill-effects of cooking with solid biomass fuels on LPG consumption. The findings offer new insights that could encourage a more regular use of LPG among poor rural households. We sampled 550 PMUY households across rural Bikaner — NSS data indicates that the pattern of fuel consumption in Bikaner district is fairly representative of rural areas of north Indian states.

Only 13 per cent of our respondents considered that serious health hazards do exist; 27 per cent perceived no health problems and 60 per cent believed that health consequences were limited to temporary irritations such as coughing or watering of eyes. Clearly, poor rural households are unaware how severely indoor air pollution from solid biomass use can affect their health, and thereby lack the basic knowledge that would enable them to take an informed decision about fuel consumption.

The study adopted a unique approach based on tenets of behavioural economics. In an experimental set up, our enumerators — mostly postgraduate students at the agricultural university — presented basic information to half the respondents. They explained the serious health effects such as chronic lung diseases, childhood pneumonia, cardiovascular disease and cataract to them. This brief exercise lead to a statistically significant improvement in health knowledge, an increased willingness to pay (WTP) for the next LPG refill, and a substantial increase in the actual use of LPG.

Households stated their willingness to pay in the framework of a well-established demand-revealing mechanism. They obtained a discount voucher (facilitated by the research team in partnership with local LPG distributors) if their stated WTP was at least as high as the offer price that they themselves subsequently drew at random from a given price range. The maximum price was Rs 480, the prevailing (subsidised) price for a refill (14.5 kg cylinder). The voucher had limited validity such that it could be used only if the household used up the LPG remaining in the currently consumed cylinder twice as quickly as it would have done under normal circumstances. This date was determined on the basis of prior questions on normal consumption along with cross-checking of the entries in the consumer’s gas book. Thus, we assessed the WTP for a refill under the constraint of more regular consumption than the prevailing pattern.

Under this condition, with no additional information, the average household was ready to spend Rs 352, considerably less than the prevailing subsidised price. Put in perspective, at current prices and awareness levels, rural households appeared unlikely to substantially enhance their consumption of LPG. However, the provision of health information leads households to take a more informed decision, which in turn increases their WTP. Our brief intervention lead to a relatively small though statistically significant difference in the WTP — from Rs 352 to Rs 362. Use of vouchers was 36 per cent higher among households that received health information.

It is reasonable to expect that a broader intervention embedded in the general LPG campaigns or within health and nutrition programmes administered to women and children in other contexts will translate into even stronger and more sustained effects. However, this requires the delivery of messages on specific effects rather than just talking about “clean” fuels, which can refer to a variety of things, including the possibility to keep the kitchen looking nice and white.

In contrast to what is commonly believed, our findings suggest that both men and women need to be convinced to achieve the desired impact. Targeting health-related information only towards women may not make a significant difference since the final decision about the purchase of a relatively expensive good such as an LPG refill is often taken by men or at best, jointly.

Complementary measures that address the problem of financial and liquidity constraints as well as the regularity and ease of access to supplies will also continue to be relevant in determining consumption. Some ongoing measures by oil marketing companies that point in the right direction to tackle these are the option to use smaller cylinders, parallel connections and decoupling of loan repayments for the stove and the first cylinder from subsequent LPG consumption.

Our evidence strongly suggests a need for refocusing the ongoing campaigns on information about the important health benefits of cooking with LPG, alongside these other complementary activities. 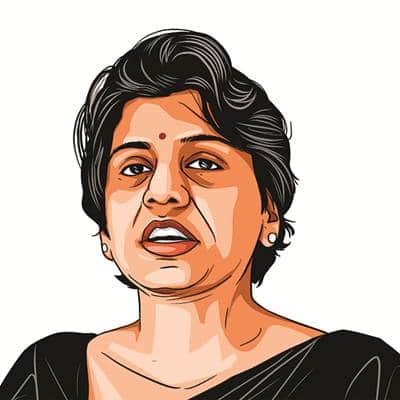