So if peace is to be restored, what we need is a strategy for war. 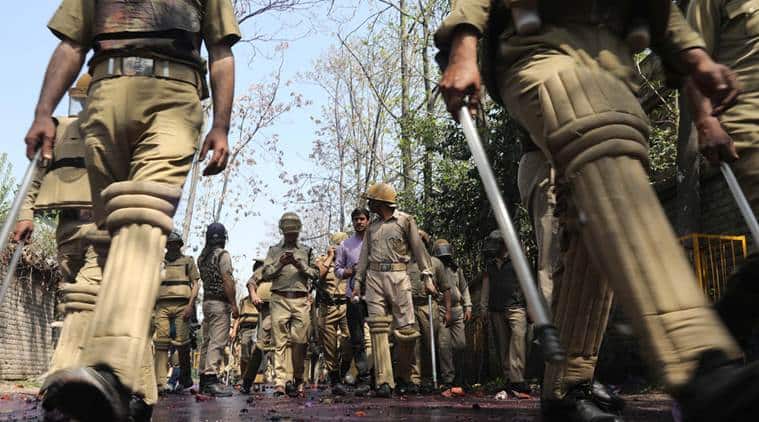 So if peace is to be restored, what we need is a strategy for war. (Express Photo By Shuaib Masoodi)

The Kashmir Valley has become a warzone today because of radical Islam. This is the exact same genre of Islam that caused the terrorist attack in Paris last week. And the exact same genre that lies at the root of all jihadi terrorist attacks. Until we admit this, we cannot begin to talk of peace. Just as it is impossible to defeat the worldwide jihad as long as moderate Muslims continue to support it, albeit inadvertently, for reasons of piety, faith and community, so will it be impossible to defeat the jihad in Kashmir. The violent mobs that abuse security personnel on the streets of Srinagar are made up of small boys and youths who are too young to understand politics but who have been bred on their difference from other Indians for reasons of faith.

If anyone has any doubts about Islam being at the centre of the current spate of violence, please watch the video recently released by the man who took over as commander of the Hizbul Mujahideen after Burhan Wani was killed. Zakir Rashid Bhat says, “When we pick up stones or guns, it should not be with the intention that we are fighting for Kashmir (as a nation). The sole motive should be for the supremacy of Islam so that Shariah is established here.” Bhat clarifies that nationalism and democracy are not permitted in Islam. Is it any wonder that the recent election saw enraged mobs burning down polling booths and smashing EVM machines? Is it any wonder that we saw the lowest polling in decades? What we should wonder about is why Kashmiri politicians contesting the election continue to speak of the stone throwers as ‘nationalists’ and ‘misguided youth’.

These things they are definitely not. They have been carefully guided in the tenets of radical Islam and think of themselves as soldiers in a holy war against a land of infidels. Frankly, after watching their vicious verbal and physical assault on armed CRPF personnel in that video that has gone viral, I am no longer convinced that they need guidance any more even from their paymasters across the border. If ‘moderate’ Islam could become the reason for India breaking in 1947, imagine what radical Islam can achieve in Kashmir today.

So if peace is to be restored, what we need is a strategy for war. Liberal commentators suggesting dialogue and interlocutors are quite simply idiotic romantics living in the past. If they open their eyes they will see that a new chapter of our Kashmir problem has opened. It has nothing to do with the historical problem, or the one created by Indira Gandhi when she toppled Farooq Abdullah’s legitimately elected government in that hot, horrible summer of 1984. In that last summer of her life Mrs Gandhi made two of her biggest political mistakes: Operation Blue Star in Punjab and the imposition a month later of an illegitimate government in Srinagar.

These mistakes have little relevance today so I mention them only in passing. Punjab has fully recovered from the insurgency caused by the military attack on the Golden Temple, and Kashmir’s current cycle of violence has nothing to do with what happened in 1984. It has everything to do with the worldwide jihad as Burhan Wani’s successor has so clearly explained, and the reason why the Modi government has not been able to deal with what has happened is because the problem can no longer be dealt with under the old rules of the game. The goalposts have changed.

My own ever humble opinion is that even if Indian prime ministers had not made the long list of mistakes they have made since 1947, there would still be a problem in the Valley today inspired entirely by the worldwide jihad. Having said this, may I add that if I were asked what needs to be done now, I would find it hard to offer a solution other than isolating the Valley from more peaceful parts of this vast and beautiful state. The people of Ladkah and Jammu have never played a role in Kashmir’s troubled history and yet, they have paid for it. Ladakh has such a repository of wild natural beauty and ancient Buddhist history that it could draw more foreign tourists than Kashmir, but the infrastructure for this is totally missing. Jammu already thrives on Hindu pilgrim tourists but could attract many, many more if some investment were made in infrastructure.

The Prime Minister can play an important role in this and in making a policy that states as clearly as possible that even if violence in the Valley continues for another hundred years, Kashmir will remain a part of India. For those Kashmiris for whom Islam is more important than the nation, there are welcome mats laid out in the Islamic republic next door.

PMPML closes down its Nigdi workshop