How do we understand the spectacle at Kashi?

Suhas Palshikar writes: The master-narrative unfolding through events like the inauguration of the Kashi-Vishwanath corridor popularises a new social contract for a Hindu state. 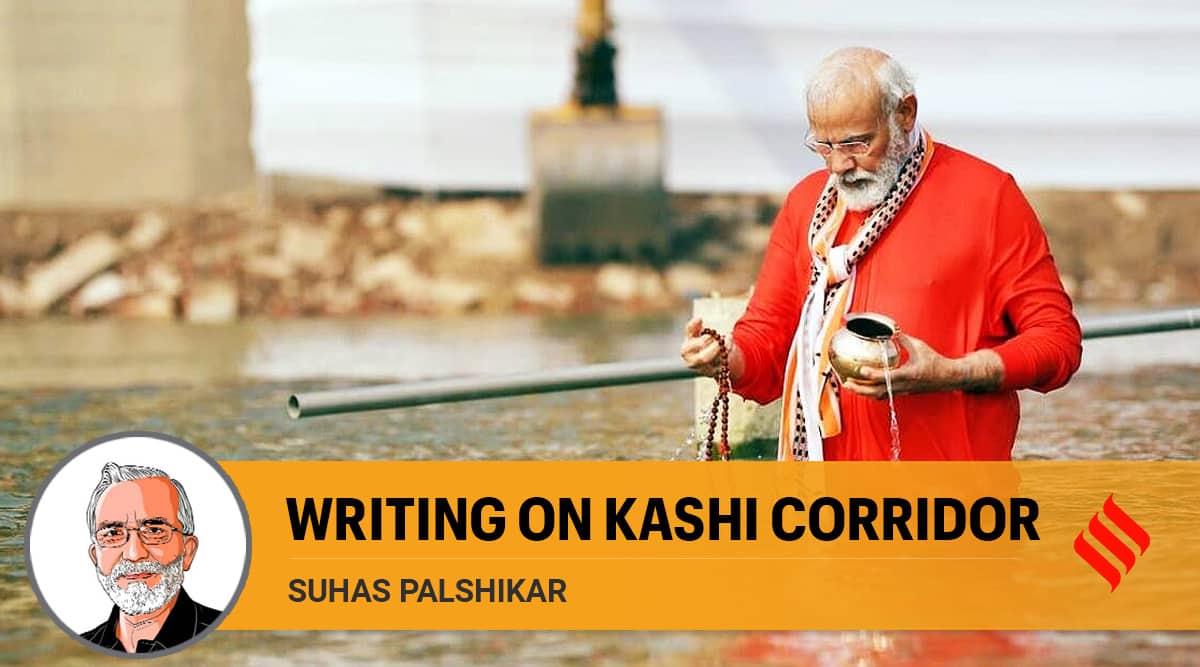 Many well-meaning commentators and analysts thought that a settlement of the Ayodhya dispute would resolve the knotty issue of “communal” tensions arising from Hindu mobilisation. We do not know what the honourable judges who gave the ruling in the matter thought about this, when they were dining out after delivering the Ayodhya-Babri verdict. But, at least in retrospect, they might be wondering if they judicially inaugurated the Hindu state — perhaps inadvertently.

Since the 1990s, when the Ayodhya dispute was raging, it was amply clear that the identity search unleashed by that agitation was not going to stop at Ayodhya. “Kashi-Mathura baaki hain” — Kashi and Mathura still remain — was the refrain. While Mathura is already facing a boiling point, the prime minister very clearly indicated the other day at Kashi that he is indeed prime minister of a Hindu state.

Focused exclusively around the austere and devout persona of the prime minister, a masterclass in performative presentation of image, the Kashi event sent out multiple messages. For the BJP’s internal politics, the image was competitive — it outshone the yogic image of the state chief minister. The imagery would also be deployed in an electoral arsenal for the approaching UP elections. But beyond these limited and UP-centric messages, the projection of the prime minister from Kashi sent a deeper message which has been mostly ignored. After all, it is one thing to see a Yogi being presented as a Yogi-cum-CM and another thing to watch the prime minister intimating that his identity and persona as a Hindu devotee outshines his duty and standing as chief executive of a secular administration.

This is, of course, not the first occasion when this has happened. First, the prime minister was projected as a yogi doing meditation in the Kedar Nath cave — that could be discounted as personal pursuit of the transcendental, except that the orchestrated publicity had nothing other-worldly about it. Then the prime minister presided over the foundation ceremony of the Ayodhya temple. Now, at Kashi, the image of the prime minister has underscored yet again, not his devotion and faith, but the larger point that India belongs to one religious identity which forms the basis of its national being.

The PM has given out a message that being Indian is coterminous with being Hindu. Then, there is a mixing of state authority with Hindu identity. Third, wearing one’s religious faith on the sleeve is a hallmark of both religiosity and political prudence. Fourth, just like its politicisation, the monetisation of the monument was unmistakable. The emphasis was on expanding space and territory, on resources being spent on a Hindu place of worship and on making it more tourist-friendly.

More than all these, the message is about mixing religiosity with a politics of othering. Notwithstanding his claim about sanatan dharma and search for the supreme, the politician in Modi could not keep the politics of Hindutva out of the ostensibly religious moment. He narrated history to bring out the starkness of battles and destruction instead of reminding his audience of the tradition of seekers and seers. While the speech did mention both Shakti and Bhakti, the latter was sidetracked by the diatribe on power. A dig at past adversaries having been consigned to remote black spots of history and a boast that nobody will now dare become aggressor, both had contemporary connotations. They indicated a new social contract wherein similar rejuvenation of Buddhist and Sikh monuments are also undertaken — this inclusion is significant for its assimilative incorporation and its determined exclusion.

It is a sad comment on mainstream public discourse that not much is being said about this new social contract. This is for two reasons, incomprehension and collusion. The folklore about the electoral and political savvy of the BJP and its leadership surely has a grain of truth in it, but that narrative misses the wood for the trees. It is eloquent about campaign detail, masterstrokes and 24×7 politics. There is no denying these, but the big picture is away from them.

It is about the master-narrative that unfolds through events such as Kashi. As this writer has been saying since 2017, it is about a new India. It is about popularising a new public morality. It is about hierarchising citizens. It is, above all, about a new India that distorts its founding document and its historic pledge of inclusive democracy.

The new social contract puts a premium on a new consensus about India being a Hindu nation and therefore the Constitution being a handmaiden of state practices consistent with that socio-cultural construct. The new social contract is about forgetting what we wanted to achieve 75 years ago. But this objective of foundational transformation is not understood adequately. Over the last seven years, the discussions have centred on personality cult and megalomania, on publicity, on the growing or slowing economy, and, only in bits and pieces, on what are seen as excesses or aberrations. That there is a pattern to these so-called aberrations and that megalomania and publicity are convenient tools for the larger project is often lost sight of.

Part of India’s social and political establishment did get a whiff of these momentous transformations. They chose to collaborate either due to partial conviction or expediency. This establishment includes our media and cultural elites as also aspiring political actors who found this as a platform for invigorating or protecting their careers. The Opposition parties have been afflicted by both these vices of incomprehension and collusion. Increasingly, as they realise the widespread acceptability of the ideas about India being a Hindu nation, they appear to be giving up any semblance of joining a debate on this issue and instead cede more and more intellectual ground. In fact, by the next general election, the Opposition would be willing to conduct politics on the middle ground curated by the BJP.

Even outside of competitive politics, there will be no serious contestations in the public domain where the debate would not go beyond the saffron attire donned by the prime minister. When critique is replaced by mere caricature and caricature confines itself to appearances and images, it is a sure sign of the arrival of hegemony. At the risk of repetition, it must be said that the spectacle at Kashi brought to us by willing collaborators of the powerful, is symbolic of the hegemony Hindutva politics has carved for itself. To be sure, there would be many more such spectacles in future and each will be a sharp reminder that the corridor to a Hindu state is lit by the sparklers of political leadership and aided by our own small sparks of collusion.

This column first appeared in the print edition on December 17, 2021 under the title ‘Writing on Kashi corridor’. The writer, based at Pune, taught political science and is currently chief editor of Studies in Indian Politics