Ironies and barricades: How between JNU and BHU, we see the brutal distance that separates us as a nation

At this moment, the two faces of student protest couldn’t be farther apart from each other. No denying that they are vastly different in scale and intensity, to say nothing of the fact that any activity in JNU is always on-camera nationwide in a way no other university in the country is. In both JNU and BHU, students are protesting measures taken by the vice-chancellor and the university administration.

Two news items jostled against each other on the front page of Tuesday’s (November 19) Indian Express.
One, the JNU protests: “A visually challenged student said he was trampled on, an ex-student received five stitches on his head, a teacher said he was kicked and hit with lathis despite identifying himself.”

Two, at Banaras Hindu University, the protests over the appointment of Firoze Khan as an assistant professor of Sanskrit. “On Monday, a ‘hawan kund’ was set up and around 20 SVDV students were sitting on a dharna outside the Vice-Chancellor’s residence protesting his appointment. The protests have been on since Khan’s appointment, for the only reason that he’s a Muslim.”

At this moment, the two faces of student protest couldn’t be farther apart from each other. No denying that they are vastly different in scale and intensity, to say nothing of the fact that any activity in JNU is always on-camera nationwide in a way no other university in the country is.

But the fact remains that in both instances students are protesting measures taken by the vice-chancellor and the university administration. One against fee hikes that will drive students from weaker sections of society away from the university. The other against the appointment of a qualified Muslim academic to teach Sanskrit.

So much for a “singular” politics of student movements. For those whom student activism conjures up the mist in the eyes, the image of Berkeley in the Sixties, Paris, 1968, or, for that matter, Calcutta in the 1970s, welcome to the brave new world, India, 2019. As I write, BHU student groups have come out in support of Firoze Khan’s appointment, and #StandWithFiroze is trending on Twitter, but so is #ISupportBHUStudents, which opposes this appointment.

Differences indicate a robust democracy. Are we to conclude, then, that in its staggering diversity, student politics in India is in rude good health?

Who knows? But diversity is one thing, and hostile polarisation another. The ironic juxtaposition of headline news from JNU and BHU reveals, more than anything else, the brutal distances that severe and separate us today as a nation. To say nothing of the ever-widening gulf between the nation and the university.

While teaching at Stanford, I once served on a Search Committee for a Confucius Chair in Classical Chinese Poetry. While the search was on, I heard a senior Chinese scholar, originally from the mainland, say that the Chinese government would like to see a white person in this position over someone who is Chinese or even of Chinese origin. Struck by that claim, I had asked why.

“Because it looks good on China when white people do their culture,” he had said. “It sends the message that we’re so big that it’s not only Chinese people who teach and research our culture. The whole world does it.” Especially white people.

I still have childhood memories of an India where the Gorky Sadans and the American Centres fought a relentless culture war against each other. It was a bipolar world, and since the war between nuclear-armed nations was a Beckettian Endgame, the whole vigour of the un-fought battle exploded in the field of culture (and outer space). It’s a phenomenon widely and globally known, with funding from the CIA coming to prestigious periodicals of art, literature and culture, including the Partisan Review. And then the Berlin Wall fell in 1989 and everything changed.

It is a lesson at least as old as colonialism. If you want to rule, make sure your culture does too. Domination in the economic or military base would never last without domination in the cultural superstructure. Marx would know. Soft power following hard power. Shashi Tharoor knows it too.

A white American teaching Chinese in California. An Indian Muslim man teaching Sanskrit in Benaras. Perhaps the scenes don’t get along with each other well.

Unlike gravity, power likes to climb up. It fulfils China’s mission to see its culture spread to the world.
In the Western world, meanwhile, the hesitation comes entirely from the other direction.

There is reluctance on part of excellent and well-meaning white academics to enter into the domain of African American scholarship. What do you know about this people? What can you say? Can you write black as white, woman as man, queer as straight?

Dominant fields, in the reverse, have willed to welcome minority exponents, while failing to flush out ancient prejudices. “You’re black,” they’ve said. “What can you say about Shakespeare? Shouldn’t you rather talk about rap?”

In the end, progressive will has won. As Jonathan Gil Harris has shown us here in India, Shakespeare studies is a richer field for having Bollywood films in it.

Firoze Khan’s appointment to the Sanskrit Department at BHU can be a dream moment of Indian pluralism. For the language and culture of Sanskrit.

“All my life,” he says, “I learnt Sanskrit and I was never made to realise I am a Muslim, but now when I’m trying to teach, suddenly it has become the only subject.”

Be taught. But don’t try to teach. Be indoctrinated. But to what doctrine will you take us if you dare to teach? Who dare trust you?

Ironically, it was also a dream opportunity for the nationalist champions of Sanskritised India. Chinese ishtyle.
Both opportunities are being cast away.

This article first appeared in the print edition on November 22, 2019 under the title ‘Ironies and barricades’. Majumdar, professor of English & Creative Writing at Ashoka University, is the author, most recently, of The Scent of God.

Mother tongue must be the medium of instruction to preserve India’s cultural diversity, heritage 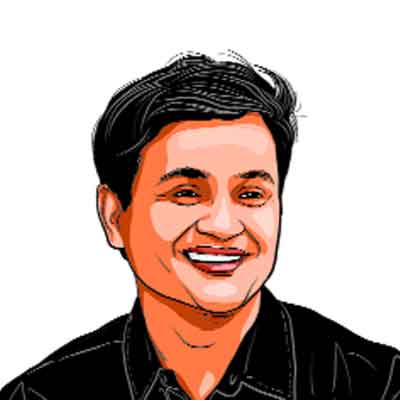