This is the first time in the history of independent India that a state has been demoted to a union territory. The PM’s explanation for an act of such far-reaching consequences was astonishingly weak. 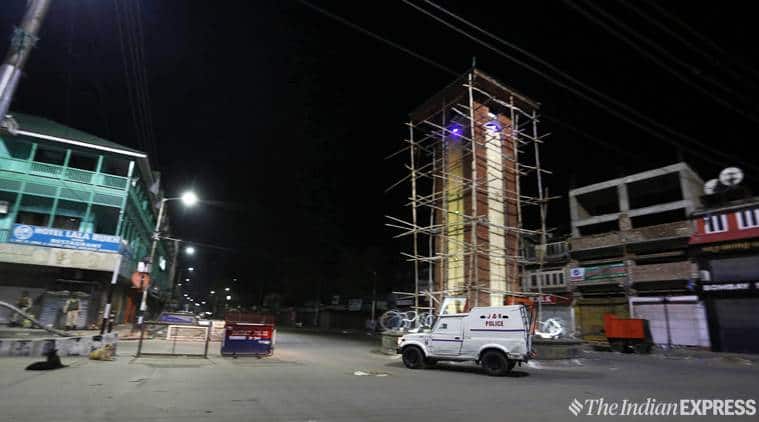 This is the first time in the history of independent India that a state has been demoted to a union territory (UT). (Express photo: Shuaib Masoodi)

On August 8, Prime Minister Narendra Modi finally addressed the nation on recent moves that fundamentally altered the character of Jammu and Kashmir and took the country by surprise, indeed shock.

As one of those astonished and deeply angered by the speed, stealth and force with which far-reaching constitutional change has been achieved, I had hoped to hear some explanation for why his administration deemed the move imperative, and even more importantly, why it was made at this time and carried through in this way, with preventive arrests and detentions, flying in 40,000 additional troops for a security lockdown of the Valley as well as neighbouring districts in Jammu and Ladakh, tabling it in Parliament without prior notice when a significant number of Opposition MPs were missing, many of whom had requested postponement until they could reach Delhi.

The PM did not refer to these actions even in passing. Though he did say that the security lockdown would soon be lifted, he gave no assurance of when. The government earlier announced that the closure of telephone lines and the internet would be relaxed on Friday, but it has been extended. It is doubtful if the PM’s Kashmiri “brothers and sisters” would even have heard his speech.

I had also hoped, groundlessly, that Modi would indicate that his other measures — demoting the state to union territory status and voiding the terms of its relation to India (Article 370) were time bound and of short duration. He did give a vague assurance that Jammu and Kashmir might one day regain statehood, but the offer was so indeterminate and hedged about with so many conditions that it offered more warning than hope.

This is the first time in the history of independent India that a state has been demoted to a union territory (UT). The PM’s explanation for an act of such far-reaching consequences was astonishingly weak. It would enable faster development, he said, because now central laws and schemes would be applied. But there is no reason to believe that UT status enables better implementation of development programmes than statehood does — of our UTs, only Goa (until 1987) and Delhi can boast of high rates of development and the factors in each case have little to do with administrative status. Indeed, development grew further after the two acquired legislatures.

The PM is willing to offer Jammu and Kashmir a legislature — how generous — but with severely truncated powers. The police and civil administration will answer only to the Centre, removing the political interface that acted as both a buffer and, if only in theory, a check on unbridled power. I trust the Union government understands that now it and it alone will be to blame for any political, security and administrative failures, however large or small.

The potential fallout on security, which should be a pressing concern, was simply skated over. There is clear and present danger that Pakistan will exploit the current situation to flood the Valley with arms and redouble infiltration attempts; equally, that homegrown militancy will rise, if not in the immediate term then certainly in the middle term. What steps does the Modis administration plan to prevent such an outcome, apart from flooding the Valley with troops and putting a lieutenant-governor in place, neither of which are likely to prove effective?

The PM did touch on one substantive issue, the voiding of Article 370, but here too his arguments consisted of a string of assertions without explanation. The critical question — how will the terms of the Instrument of Accession be codified if Article 370 is null? — he simply ignored.

Instead, he said that Article 370 had been a major impediment to Jammu and Kashmir’s development because it entrenched corruption and nepotism. No objective analyst will deny that the state was riddled with these twin evils, but so are a large number of other Indian states and they are not governed by Article 370. In fact, the people of Jammu and Kashmir complain far more loudly about these evils than do the residents of other states, perhaps because in their case corruption and nepotism are tied to a situation of ongoing conflict, which has, as in most conflict regions worldwide, produced a black economy. To think that corruption can be removed when violence persists is merely hubris.

The bulk of Modi’s speech was a laundry list of beneficial programmes to follow. Some of these were initiated years ago — such as scholarship schemes and inducements to industry to invest and Bollywood to make movies — and faltered for the same reason in each case, continuing violence.

The truth of the matter is that Jammu and Kashmir is ahead of the bulk of other states on development indicators such as food, housing, health, education and even gender (in some respects). The Modi administration is doing no more than previous administrations have done — throw money at a people while taking away their political and human rights.

With one great difference: This time it is a full-scale denial of their rights, one which raises acute concern about the vulnerability of our democratic, federal and constitutional structure. As critics have pointed out, what is the guarantee that what has been done in Kashmir will not be done elsewhere, at the whim of this or successive administrations?

The PM did not address these concerns either, and his omission sent out the message that the will of the people is irrelevant when it comes to Jammu and Kashmir. The contrast between this position towards the majority population and that towards selected minorities in the state could not be sharper. In Leh, Jammu city and amongst stranded refugees, it is clear that though the will of its people was not solicited, they support this move. All the rest, the Modi administration appears to believe, can go hang.

What has been perpetrated, in one fell sweep, is a coup on the people of Jammu and Kashmir. The prime minister’s speech sought only to normalise the coup. Whether he will succeed in doing so is up to us. Following the craven failure of our parliamentarians to debate the intentions, implications and method used by the Modi administration in the past week, and the widespread Indian support for what has been done, the future for both Kashmiris and Indian democrats seems bleak.

This article first appeared in the August 10, 2019 print edition under the title ‘Sins of omission’. Kumar is a former interlocutor for Jammu and Kashmir and author of Paradise at War: A Political History of Kashmir.