🔴 Deepika Saraswat writes: Iran wants the JCPOA talks to succeed and the sanctions against it to end 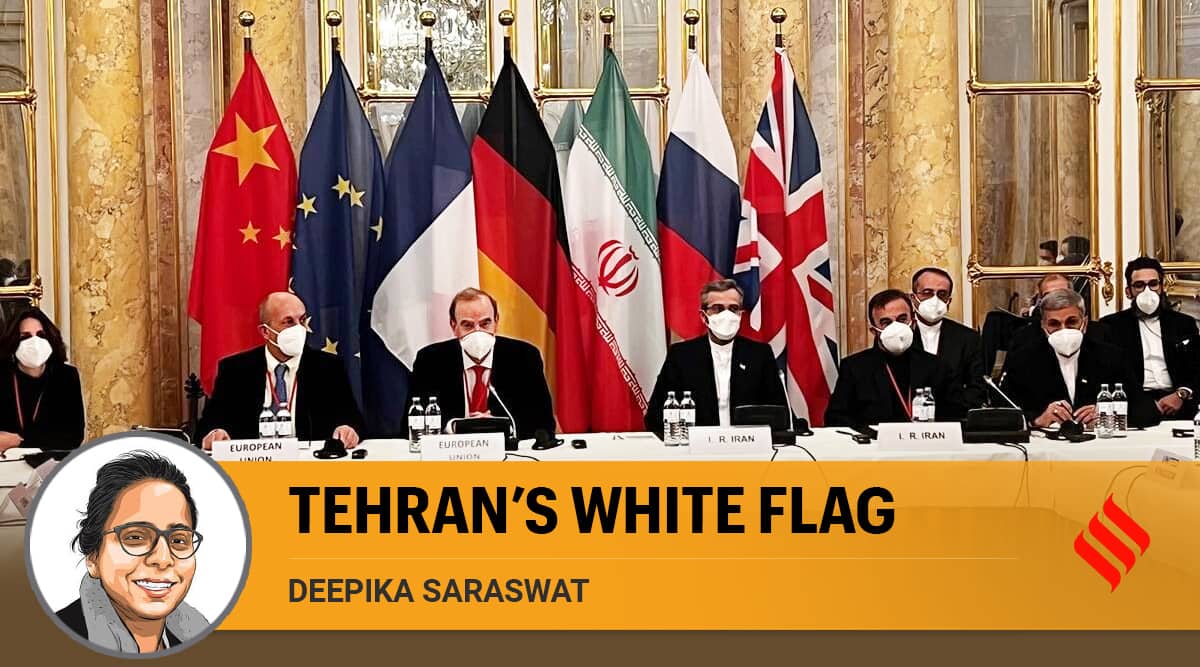 Iran’s new delegation joined the seventh round of talks in Vienna on the revival of the Joint Comprehensive Plan of Action (JCPOA). In sharp contrast to the apprehension that having delayed the talks for four months since the inauguration of the new administration, the hardliner team will lead to a deadlock in negotiations, Deputy Foreign minister and lead negotiator Ali Bagheri told reporters at the end of the first day of talks, that all the issues remaining from the previous six rounds could be negotiated.

The new team, however, brings the political sensibilities of the incumbent conservative administration into its approach to negotiations. Bagheri has maintained that negotiations should not be called nuclear negotiations, as the key objective is the lifting of sanctions. In line with this goal, the Iranian delegation is composed of legal and banking/financial officials, with most of them having served as representatives to international organisations, including IAEA. Upon Iran’s insistence, a meeting of the JCPOA Joint Commission’s working group on lifting sanctions was held on November 29, the working group on nuclear commitments met the next day.

During the four-month hiatus, Iran expanded its stockpile of 60 per cent enriched uranium and denied IAEA monitoring access to the Karaj centrifuge manufacturing workshop after it came under a sabotage attack in June 2021, for which Tehran blames Israel. As the European Union coordinator of the Joint Commission of the JCPOA reached out to Tehran, raising “urgency” to resume talks, the new administration declared that “Iran’s actions will be commensurate with the level of actions of the other parties”. Analysts argue that by enriching nearly weapon-grade uranium, Iran is demonstrating its capability to swiftly retaliate if Washington was to do another volte-face on the agreement. Further, unlike the previous administration, the Raisi administration is delinking Iran’s economy from JCPOA negotiations, prioritising economic diplomacy with Asia so that any reneging on a deal by Washington in future does not cause a shock to Iranian economy. In a nutshell, Iran’s approach is to build leverage and not compromise on key issues of lifting all sanctions, including those imposed after 2018, and guarantee against future violations of the agreement.

Another indication that Iran is serious about the revival of JCPOA is the continuation of intensive diplomatic outreach with its Gulf neighbours under the Raisi administration, raising hopes that the agreement reached in Vienna will have acceptance from Iran’s neighbours who were critical of the JCPOA. Tehran has traditionally refused to link the nuclear talks to discussions on Iran’s regional policy and ballistic missiles programme by maintaining they are separate issues and regional issues will be discussed with regional states alone. In October, when Iran’s Foreign Minister Hossein Abdollahian called on the US president to re-enter JCPOA through an executive order, he also sought to reassure Iran’s Gulf neighbours that the nuclear deal “will not be against the region or our neighbours” and that Iranian “negotiators should appraise neighbours and key regional players of nuclear talks.”

Abdollahian has called his UAE counterpart Sheikh Abdullah bin Zayed Al-Nahyan twice in November and emphasised the need for “continuous consultations” between the two countries. Just a few days before the resumption of negotiations, Tehran’s chief negotiator Bagheri travelled to Dubai and met senior officials, including Anwar Gargash, diplomatic adviser to the UAE President. Similarly, Raisi administration’s willingness to have a fourth round of talks with Riyadh in Baghdad this year bodes well for restoring peace and stability in the region and Riyadh’s support for the agreement reached in Vienna. The Biden administration, on its part, has been engaging its regional allies and partners from the beginning of the negotiations, and is supporting its allies’ engagement with Iran. Robert Malley, US Special Envoy for Iran, argued in the recently organised Manama Dialogue that many of the region’s dysfunctions have roots in Iran’s exclusion in the region’s security architecture.

Notwithstanding Iran’s seriousness towards negotiations, the role of another regional player, Israel, will also influence future progress in Vienna. For now, Tel Aviv is pressing its allies, the US and the UK, for a hardline approach to get a “longer and stronger” agreement. But if the negotiations prolong and Iran’s stockpile of highly enriched uranium grows, any sabotage attacks on Iran’s nuclear facilities will likely sabotage the talks at Vienna.

This column first appeared in the print edition on December 6, 2021 under the title ‘Tehran’s white flag’. The writer is associate fellow, Manohar Parrikar Institute for Defense Studies and Analysis