Team Melli and the Socrates legacy

Amrith Lal writes: The Iranian football team’s show of defiance in Doha is likely to have major consequences, considering the nature of the authoritarian regime in Tehran. Amrith Lal writes: But their eloquent silence has amplified the voice of the protests and taken it to the farthest corners of the world. Sports is entertainment, of course, but its finest moments are laced with politics that celebrate the free spirit. Iran lost the match but the team made history. (Reuters)

On Monday last, the Iranian football team (Team Melli, as it is popularly known) faced England in its World Cup opener at the Khalifa International Stadium in Doha, Qatar. As is the tradition, the national anthems of the teams were played in the stadium. However, the Iranian players stood quiet as their national anthem was played as a mark of solidarity with the mass protests in their homeland. The protests that started in September when Mansa Amini, a 22-year-old Kurdish-Iranian woman died in state custody, have been brutally handled by the state authorities in Tehran. The Iranian football team’s show of defiance in Doha is likely to have major consequences, considering the nature of the authoritarian regime in Tehran. But their eloquent silence has amplified the voice of the protests and taken it to the farthest corners of the world. Sports is entertainment, of course, but its finest moments are laced with politics that celebrate the free spirit. Iran lost the match but the team made history.

Our editorial (‘Woman, life, liberty’, November 23) framed the moment in its context: “Brave as it was, it is important to recognise the gesture of the Iranian footballers as a supporting act to the fearless call of the women of their country for jin, jiyan, azadi (woman, life, freedom). The present movement is a culmination of years of rage and deprivation, of the infringement on women’s independent thought and choice. Despite the heavy burden they bear, Iran’s women have continued to find ways to rebel against the gender bigotry and the curtailment of human rights that begins but does not end with them, choosing to be survivors standing up to powerful men rather than giving in to archaic demands for conformity.” The footballers’ act was in step with similar acts of solidarity that the Iranian artists, intellectuals and athletes have shown, wrote Ramin Jahanbegloo (‘Apartheid moment for Iran’, November 23).

Albert Camus famously said that “all that I know most surely about morality and obligations I owe to football”. In a different era, on a different continent, Brazilian legend Socrates had turned the beautiful game into a parable of democracy. In the 1980s, Socrates Brasileiro Sampaio de Souza Vieira de Oliveira, a trained medical doctor, with friend Wladimir had organised their footballing colleagues into a utopian socialist cell called the Corinthians Democracy to challenge the hierarchy and inequities in club football. The Corinthians Democracy established that everyone at the São Paulo club, from the president to the cleaners and the kit-men, had an equal vote and every decision taken by the club including travel schedules to which player to sign on was put to vote. Prize money was shared equally among players and a certain percentage of it between all the club staff. Brazil then was under military dictatorship and the Corinthians one of the country’s champion football clubs. Millions of Corinthians fans would cheer and chant in the name of democracy when the Socrates-led team took to the field. In the galleries, they would unfurl the banner, “Win or lose, but always with democracy”.

In the run-up to elections in Brazil on November 15, 1982, Corinthians Democracy voted to print “vote on the fifteenth” on the back of their shirts. The elections — for federal deputies, senators, governors and mayors — were one of the first steps towards ending the dictatorship (Alex Bellos, Futebol: The Brazilian Way of Life). Socrates would say that “it brought a conscience to the people that you could vote and change things — it made people realise together with other movements that were happening in the country that you could make change”. In 1982, the Corinthians won the São Paulo state championship with “Democracia” printed on their shirts. Years later, Socrates would tell Bellos, “Perhaps it was the most perfect moment I ever lived. And I am sure it was for 95 per cent of the others too.”

Socrates captained Brazil’s “Class of 82”, which included Zico and Falcao, at the 1982 World Cup. The team played glorious football but was flattered to deceive and lost out to Italy, the eventual winner. In the 1986 World Cup in Mexico City, he played with a headband that read, “Mexico, Stand Tall”. Just ahead of the Cup, an earthquake devastated the city killing over 10,000 people. Socrates had said, “I want to die on a Sunday, the day Corinthians win a title.” On December 4, 2011, a Sunday, O Doctor (the doctor) died at the age of 57. The same evening, the Corinthians drew their final league match with Palmeiras to win their fifth Brazilian league title.

In Doctor Socrates, biographer Andre Downie writes: “When the stadium announcer called for a minute’s silence, grown men cried and a deafening chant of ‘Socrates! Socrates! Socrates!’ rang round the magnificent art-deco stadium. Fans held up their right arms, their fists clenched in a military salute, exactly like Socrates did when he scored a goal. Down below them, the Corinthians players lined around the centre circle did the same.” As Downie writes, “His actions helped transform not just a football club but a country. He helped Brazil through those pivotal years that led from dictatorship to democracy, and he put his country before himself with a promise to eschew European riches and remain at home to help his people.”

Socrates would have been proud of the Ehsaan Hajsafi-led Team Melli.

Amrith Lal is Deputy Editor with the Opinion team 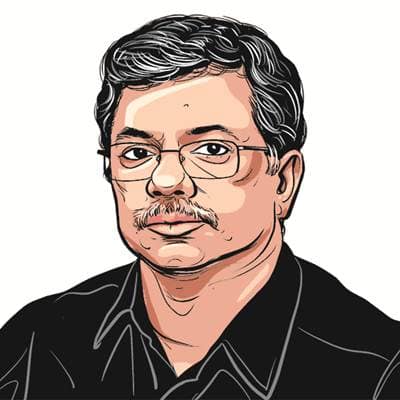