Why India must strengthen its public sector The government’s reluctance to support BHEL has flooded the Indian power sector with Chinese equipment.

A spectre haunts the Western world. The spectre of Chinese State-Owned Enterprises (SOEs) and their control over the “commanding heights” of the global economy.

The strategic establishments were startled when the Fortune Global 500 list 2020 revealed that Chinese large firms had overtaken US-based firms. China today has 124 firms in the Fortune list, of which 95 are SOEs, compared to 118 from the US. Many so-called private Chinese firms like ZTE and Lenovo are known to be controlled by SOEs.

The next group of 26 SOEs are from the OECD countries, while emerging market countries like Brazil, India, Mexico add another 17 to make a total of 135 SOEs in the list. This may be compared to a mere 45 SOEs in the 2005 list (figure 1). Today, 28 per cent of the world’s largest and most powerful economic entities are state-owned, dominated largely by the Chinese SOEs.

The rise of Chinese SOEs in the global economy can be traced to the strategic vision and plan articulated in 1998 at the 15th Congress of the Communist Party of China (CPC). The Congress approved a radical restructuring of the state sector with the policy of “grasp the large and let go of the small”. China had more than one lakh SOEs, covering all services, retail, construction, industrial and agricultural sectors. It quickly let go of the small and shut down or privatised 90,000 enterprises, with little impact on the share of SOEs in total output. The reforms launched by the15th Congress were to restructure larger SOEs, “corporatise” them and list several on the stock market, making them profitable and competitive in global markets. Simultaneously, China set up 37 new SOEs in new emerging industries and technologies.

The last two decades have witnessed Chinese SOEs acquiring several American and European technology companies, from IT to oil fields, coal to strategic minerals, telecom to mobile phones and solar wafer to computer chips. By 2010, Chinese SOEs controlled overseas assets worth a whopping $586 billion. According to the US Centre for Strategic Studies, in 2019, China’s investment in the US was $2.7 trillion, while Europe received another trillion dollars. Compare this to India’s current GDP of $2.8 trillion.

The rise of Chinese SOEs has far-reaching consequences for global competition and control over strategic technologies and resources. China’s rise to seek its “legitimate” place in the sun, long dominated by the West with its multinationals and military power, has more to do with the power of its SOEs than its guns or warships. This has alarmed global observers but has strangely bypassed Indian policymakers embarking on a frenzied privatisation drive.

In 1998, under prime minister A B Vajpayee, India too embarked on public sector enterprises (PSEs) reforms with the Navratna Scheme. The large profit-making PSEs were granted autonomy in strategic and operational decisions, including investment, acquisitions, and borrowings. The Vajpayee government also encouraged these PSEs to become “global” and acquire assets and strategic minerals abroad. However, the PSEs were denied any fiscal support, rather the government insisted on taking large dividends. This is in stark contrast to China where SOEs are liberally funded to grow and become global. 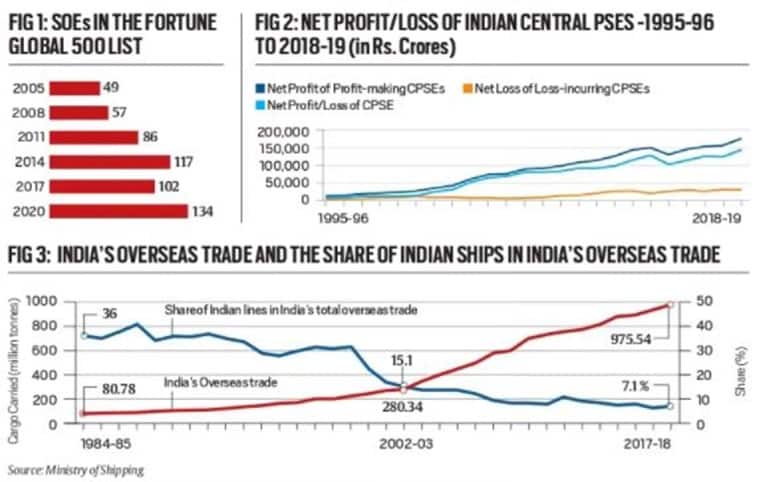 The Vajpayee government promoted the private sector in areas that were dominated by the public sector and privatised many PSEs. It undertook a series of sectoral price reforms where PSEs were dominant such as in power, petroleum, fertiliser and chemicals. Low prices of PSE products had made private entry unattractive. The PSEs were encouraged to charge full-market prices or even global prices to facilitate private entry.

The UPA in 2004 deepened the Navratna policy by including several more PSEs, and in an Indian version of “let go the small and weak”, set up the Board for Reconstruction of PSEs (BRPSE) to turn around or shut down loss-making companies.

An unintended consequence of NDA’s price reforms was that the inherent strength and efficiency of PSEs became apparent. They had long attracted the best engineering and management talent in the country. The profits of Central PSEs by 2018 stood at Rs 1,75,000 crore, up from Rs 43,000 crore in 2003-04 (figure 2).

The rising profitability meant that Indian PSEs were investing more and expanded rapidly to become darlings of the stock market. As the Indian economy accelerated under UPA-I, with its total domestic investment rising to almost 40 per cent of GDP by 2010 from 26 per cent in 2002-03, the PSEs played a major role in increasing capital formation and accelerating growth. ONGC even acquired a private Indian refinery. With government encouragement but negligible financial support, PSEs were acquiring assets and resources abroad, often clashing with Chinese SOEs vying for the same assets. Till 2007, the PSEs were the largest outward investors from India. As the private sector has cut back its investment over the last several years, PSEs have become important drivers of industrial investment.

Today, as the Indian government readies to privatise India’s most vital and significant PSEs — Bharat Petroleum (a Fortune 500 company) BEML, and the Shipping Corporation — and dismember ONGC, the Chinese may be happy to acquire these firms and their assets, through a chain of firms they would control. Yet, these firms are important strategic assets to confront a rising China, more valuable than Rafale jets or leased Russian submarines. Bharat Petroleum has assets in 17 countries and holds part of India’s strategic oil reserves. Declining support to SCI and Indian shipping has meant that the share of India’s maritime trade carried by Indian ships is today a minuscule 6 per cent, down from 40 per cent in 1989 (figure 3). No prizes for guessing whose ships transport India’s trade.

The government’s refusal to support PSEs at critical moments has left wide gaps in key industrial capabilities. With the collapse of HMT, India is forced to import 80 per cent of its machine tools, the bedrock of manufacturing. The undermining of the pharmaceutical PSEs like IDPL and HAL, once India’s pride, makes it dependent on active ingredients from China. The government’s reluctance to support BHEL has flooded the Indian power sector with Chinese equipment. Moreover, India is largely absent in emerging technologies like solar wafers, computer chips or EV batteries. India needs to imitate China in establishing new PSEs in strategic and emerging industries, which require patient capital and greater risk. In the development of a civilian aircraft, India has lost a decade due to the ideological reservation about spending public money for developing anything outside defence.

At this critical juncture, the sale of giants like BPCL, BEML or SCI would undermine India’s “Atmanirbhar” goal. Privatisation compromises India’s sovereignty and economic freedom, threatening its energy security and strategic posture. If India is not to hide behind the tailcoats of western powers as it confronts a rising China, it must strengthen its public sector enterprises.

This column first appeared in the print edition on September 25, 2021 under the title ‘The strategic public sector’. Shankar is former Union secretary, DIIP and Khanna taught at Indian Institute of Management, Calcutta