As growth recovers, inflationary concerns could begin to dominate Fears that the celebrations during the Diwali festival would lead to a surge in virus cases haven't played out.

As the world grapples with the COVID-19 pandemic, India has stood out in three distinct ways. One, over the past few weeks, India seems to have broken the link between rising levels of mobility and COVID-19 cases. Fears that the celebrations during the Diwali festival would lead to a surge in virus cases haven’t played out. In fact, the number of new cases has fallen while the fatality rate continues to drop. Two, India has rolled out one of the smallest fiscal support packages globally, with central government spending flat so far this year. Three, inflation is now a big problem, with consumer prices above the 6 per cent tolerance level for the past eight months.

The fact that Indians can move around more freely without a jump in COVID-19 cases is a major positive that is already paying off. The last quarter saw an improvement in growth as consumers were eager to spend, especially on festival-related items, bolstered by higher-than-usual financial savings.

With the vaccine coming, the economy could get a further shot in the arm. The combination of mass vaccinations, herd immunity (for instance in parts of Mumbai) and rising recovery rates augurs well for growth. We expect the resulting exuberance to be led by the release of pent-up demand for high-touch services, in the same way that pent-up demand for physical goods preceded the recovery in 2020.

At first glance, it may seem that India got off lightly and is back on the path to recovery. But a deeper look suggests that the low level of fiscal spending could leave behind other problems, such as rising inequality.

After all, much of the fiscal support packages around the world have been directed towards safeguarding the vulnerable — poorer households and small businesses. Although it is true that in India there was a focus on these areas, there were some misses, such as the urban poor being left out, and the overall outlay was small. For instance, demand for the rural employment guarantee programme continues to outstrip supply.

And then there is the rise in inequality between large and small firms, which is likely to be felt by individual employees. The corporate results in the quarter ending September were telling — large listed firms saw a bigger rise in profits (50 per cent, year-on-year). A combination of cost-cutting, low interest rates, access to buoyant capital markets and increased spending in the formal economy probably helped.

The smaller listed firms did not do as well (7 per cent, year-on-year). And the unlisted informal firms, typically with small cash buffers, are likely to have faced acute economic stress.

In fact, it can be argued that large firms benefited, in part, at the cost of smaller, informal firms. This could have happened in two ways. One, spending moved from small firms to large ones as they were more efficient through the lockdown period. Two, small firms are especially vulnerable to delays or defaults on payments they are owed, many times from the larger firms.

All this could impact demand over time. We are already seeing some early changes like sales of more expensive passenger vehicles doing better than motorbike sales. Indeed, rising inequality is a scar that the pandemic is likely to leave behind.

But this is not where it ends. Rising inequality could have other side effects. It could stoke inflation. India has had trouble in the past with rising prices of services. Once this trend takes hold, as it did in 2011, it remains elevated for a prolonged period. And trying to boost supply takes time. Think health and education services, for example.

For three reasons, it is possible that services inflation rises quickly in 2021. One, as a vaccine comes into play, there could be a release of pent-up demand for high-touch services. Two, as large firms and their employees do relatively well, they are likely to demand more services, stoking prices. Consumption patterns show that the rich in India tend to consume more services than the poor. And rising inequality could, therefore, stoke inflation. Three, many service providers did not do a regular annual price reset in 2020, so they may raise prices to cover the two years once demand picks up. If inflation does become persistent and leads to tighter monetary policy, that could weigh on growth over time.

Putting all of this together, it seems India will come full circle in 2021. For a while it was worried more about weak growth than high inflation. But as growth recovers, inflationary concerns could reappear.

Indeed, inflation control could be the main task facing policymakers in 2021. The RBI may have to take steps to gradually drain the excess liquidity in the banking sector, provide a floor for short-term rates, which have fallen below the reverse repo rate, and finally narrow the policy rate corridor by raising the reverse repo rate. A quicker exit from loose monetary policy could become another area where India differs from the world.

This article first appeared in the print edition on December 28, 2020, under the title “Beneath the recovery”. The writer is chief India economist, HSBC Securities and Capital Markets (India) Pvt Ltd 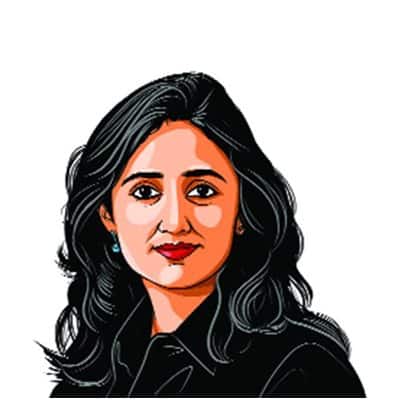