On India-US military pact, defence ministry and sceptics talk past each other 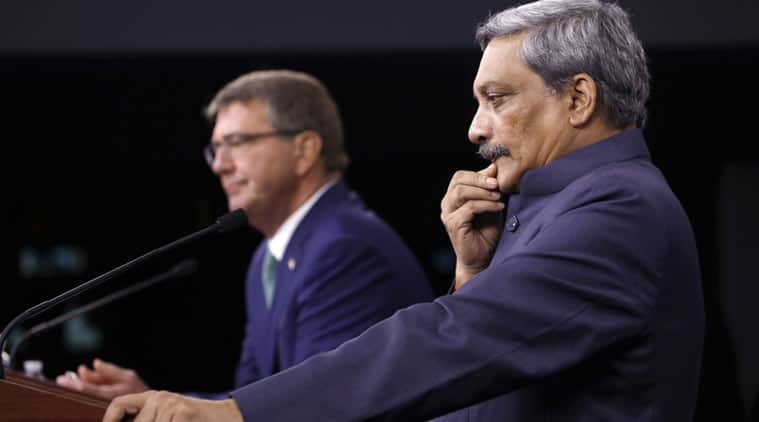 A few days after Defence Minister Manohar Parrikar and his American counterpart, Ashton Carter, announced the signing of the Logistics Exchange Memorandum of Agreement (LEMOA), a senior Pakistani military official told me that, “America can be no one’s friend. You don’t need to look beyond us to know how they court you and use you.” Given the current state of the US-Pakistan relationship, his statement does not come as a surprise. However, this view is not uncommon even among senior Indian military and government officials. It is against this backdrop that the defence ministry explained the signing of the LEMOA with the US.

In the press conference at the Pentagon following signing of the agreement, Parrikar was at pains to explain that the pact “doesn’t have anything to do with the setting up of a base. It’s basically logistics support to each other’s fleet, like supply of fuel, supply of many other things which are required for joint operations, humanitarian assistance and many other relief operations”. Carter echoed these views and the defence ministry soon followed up with a press release explaining what the logistics agreement was not about, rather than what it was about.

It would be a mistake to see these statements solely as an attempt to assuage the political opposition, whose hostility to this pact was well-known. These clarifications are equally directed towards a strong constituency of serving and retired military officials and bureaucrats, who have expressed their discomfort with the agreement. When Parrikar deflected a question about the signing of the two pending “foundational agreements” — by stating that it took 12-13 years to get through LEMOA, and he would first explain it to the Indian public — he was tacitly acknowledging the concerns of this constituency within the establishment.

The story of defence pacts goes back to the turn of the century, when the US, under President George W. Bush, was exploring a new relationship with India. Military ties were at the core of this relationship and Washington wanted Delhi to sign the four “foundational agreements”. The General Security of Military Information Agreement was signed in 2002. Other proposals were made in the twilight years of the Vajpayee government and by the time the discussions gained momentum, the Congress-led UPA was in power. The proposed military logistics agreement was the generic Acquisition and Cross Service Agreement (ACSA) which the US has signed with nearly 80 countries.

In 2005, the UPA government told the Americans that it could not be a signatory to a generic agreement because of political reasons and needed an India-specific agreement. Thus came the Logistics Support Agreement (LSA), a version of the ACSA, which the US has signed with a few countries. Till the Left Front was a part of the UPA government, there was little progress on signing the pact. Moreover, it became a minor appendage to the larger issue of the India-US nuclear deal.

But the UPA government did not proceed even after 2008, once the Left had withdrawn its support to the Congress. The then defence minister, A.K. Antony, remained opposed to these pacts — not without some support in the ministry and among the defence services — and the Americans kind of gave up. They picked up the thread again when the BJP came to power, and even then, it has taken more than two years and hard negotiations — including a change of name from LSA to LEMOA — for India to sign on the dotted line.

In the discussion on LEMOA, the defence ministry and those worried about it are, perhaps, talking past each other. The ministry is emphasising the substance of the agreement — the details of the logistics exchange process, restrictions on its scope, case-by-case approval — and that it is an “enabling” agreement and not a “binding” one. But those opposed to it are not worried about the substance of the agreement. They are more concerned about what it signals.

For the first time since Independence, India has signed such an agreement with a major power. Even the August 1971 pact with the Soviet Union was a strategic agreement, with little military-to-military cooperation. Carter acknowledged the moment’s significance when he said that “with respect to the major defence partnership agreement, that is a very substantial change. It’s an enormous change from 50 years of history”. It would be hard to deny the fact that India and the US have reached a military agreement with long-term import.

This is the real missing question in the debate: Has the ground shifted significantly in India’s foreign policy where Delhi has decided to cast its lot with the US for the foreseeable future? This shedding of the “hesitations of history” by the government needs to be situated in a geopolitical context and explained beyond the minutiae of the logistics pact. This is a question that must be vigorously debated, both by the public and the Parliament.