C Raja Mohan writes: The time has come for it to begin a strategic conversation with Europe on Eurasian security. This will be a natural complement to the fledgeling engagement between India and Europe on the Indo-Pacific. 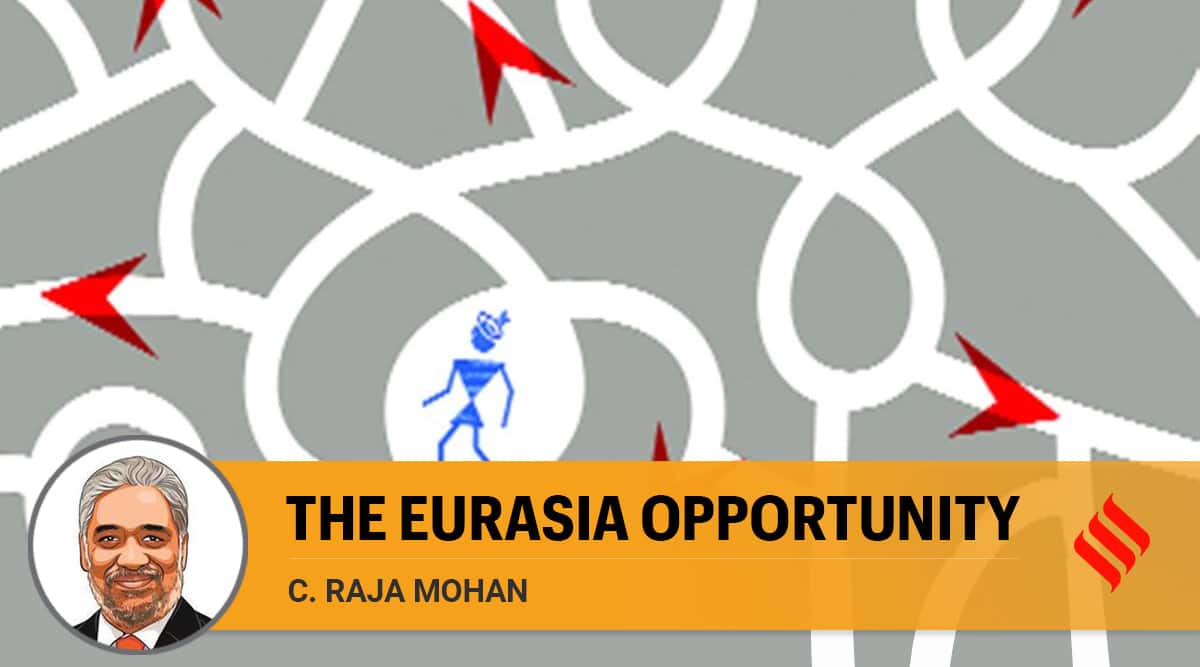 After years of self-doubt, Delhi has clinched the internal debate on the Indo-Pacific and has made it integral to India’s foreign and security policies. (Illustration by C R Sasikumar.)

Delhi’s Indo-Pacific strategy has acquired political and institutional traction, thanks to intensive Indian diplomacy in recent years. It must now devote similar energy to the development of a “Eurasian” policy. If the Indo-Pacific is about Delhi’s new maritime geopolitics, Eurasia involves the recalibration of India’s continental strategy.

This week’s consultations in Delhi on the crisis in Afghanistan among the region’s top security policymakers, following the US withdrawal, is part of developing a Eurasian strategy. National Security Advisor Ajit Doval has invited his counterparts from Pakistan, Iran, Central Asia, Russia, and China to join this discussion on Wednesday. Pakistan’s Moeed Yusuf has declined to join. It is not yet clear whether China will attend. Pakistan’s reluctance to engage with India on Afghanistan reveals Delhi’s persisting problem with Islamabad in shaping a new Eurasian strategy. But it also reinforces the urgency of an Indian strategy to deal with Eurasia.

After years of self-doubt, Delhi has clinched the internal debate on the Indo-Pacific and has made it integral to India’s foreign and security policies. Given its novelty and strategic salience, the Quad or the Quadrilateral forum that brings India together with Australia, Japan and the US, looms large over the Indo-Pacific debate. But Delhi now has a mix of other important unilateral, bilateral, minilateral, and multilateral initiatives in the Indo-Pacific.

As in the Indo-Pacific, so in Eurasia, there is no shared international understanding of what constitutes the region. Among those who study the geography of the earth’s landmass and oceans, there are agreed definitions of the Indo-Pacific and Eurasia. If the Indo-Pacific describes the long stretch of tropical waters from the east coast of Africa to the central Pacific, Eurasia is the name of a tectonic plate that lies under much of what we know as Europe and Asia. But the trouble begins when it comes to the political geography of Eurasia. In Russia’s definition, Eurasia covers the former territories of the Soviet Union, which collapsed in 1991. In other words, it is about Russia’s political claim to a sphere of influence in its “near abroad”. Then there are various older usages like “inner Asia” and “Central Asia” that cover parts of the region. Given the deep connection between Muslim Central Asia and West Asia, some prefer the term “Greater Middle East” to describe parts of this region.

For Delhi, it makes sense to use the broadest possible definition of Eurasia in reimagining the region. The most important development in Eurasia today is the dramatic rise of China and its growing strategic assertiveness, expanding economic power and rising political influence. Beijing’s muscular approach to the long and disputed border with Bhutan and India, its quest for a security presence in Tajikistan, the active search for a larger role in Afghanistan, and a greater say in the affairs of the broader sub-Himalayan region are only one part of the story. As the world’s second-largest economy, China’s commercial influence is felt across the world. Physical proximity multiplies China’s economic impact on the inner Asian regions.

The impressive expansion of China’s Belt and Road initiative across central Asia and Russia, onto the shores of the Atlantic, and Europe’s growing economic interdependence with China have added to Beijing’s powerful leverages in Eurasia. These leverages, in turn, were reinforced by a deepening alliance with Russia that straddles the Eurasian heartland. Russia’s intractable disputes with Europe and America have increased Moscow’s reliance on Beijing.

Amidst mounting challenges from China in the Indo-Pacific maritime domain, Washington has begun to rethink its strategic commitments to Eurasia. The US withdrawal from Afghanistan is just the beginning of a long-overdue redefinition of US global strategic priorities. Even Europe, which has seen a massive deployment of US military resources since the Second World War, is not immune to the inevitable rearrangement of the US military’s global disposition. Washington and Brussels are now in the middle of an important debate on how to rebalance the trans-Atlantic responsibilities for Europe’s collective defence.

Whether defined as “burden-sharing” in Washington or “strategic autonomy” in Brussels, Europe must necessarily take on a larger regional Eurasian security role. More broadly, regional powers are going to reshape Eurasia.

India has certainly dealt with Eurasia’s constituent spaces separately over the decades. What Delhi now needs is an integrated approach to Eurasia. Like the Indo-Pacific, Eurasia is new to India’s strategic discourse.

To be sure, there are references to India’s ancient civilisational links with Eurasia. The collaboration between the Sangha and the Shreni in the Buddhist era produced lasting interaction between the two regions. India’s inward orientation after the decline of Buddhism did not stop the flow of Central Asian forces into the subcontinent. The arrival of the British in India and the consolidation of the Raj as a territorial entity in the subcontinent saw the outward projection of India’s influence into Central Asia. British rivalry with Russia during the Great Game in the 19th and early 20th centuries put Eurasian geopolitics at the top of undivided India’s security agenda. The Partition of the subcontinent and India’s physical disconnection from inner Asia, however, cut India off from Eurasian geopolitics. Overcoming the geographic limitation — represented by the Pakistan barrier— will be central to an expanded Indian role in Eurasian geopolitics.

While there are many elements to an Indian strategy towards Eurasia, three of them stand out. One is to put Europe back into India’s continental calculus. Before independence, many Indian nationalists turned to Europe to secure the nation’s liberation from British colonialism. After independence, Delhi’s drift towards an alliance with Moscow saw India neglect Europe’s strategic significance. As India now steps up its engagement with Europe, the time has come for it to begin a strategic conversation with Brussels on Eurasian security. This will be a natural complement to the fledgling engagement between India and Europe on the Indo-Pacific.

India’s Eurasian policy must necessarily involve greater engagement with both the European Union and the North Atlantic Treaty Organisation. A dedicated military office in the Indian mission to Brussels, where both EU and NATO are headquartered, will be a crucial step towards a sustained security dialogue with Europe.

Third is the substantive Indian collaboration with both Persia and Arabia. If Persia’s location makes it critical for the future of Afghanistan and Central Asia, the religious influence of Arabia and the weight of the Gulf capital are quite consequential in the region. India’s partnerships with Persia and Arabia are also critical in overcoming Turkey’s alliance with Pakistan that is hostile to Delhi.

India will surely encounter many contradictions in each of the three areas — between and among America, Europe, Russia, China, Iran, and the Arab Gulf. As in the Indo-Pacific, so in Eurasia, Delhi should not let these contradictions hold India back.

The current flux in Eurasian geopolitics will lessen some of the current contradictions and generate some new antinomies in the days ahead. But the key for India lies in greater strategic activism that opens opportunities in all directions in Eurasia.

This column first appeared in the print edition on November 9, 2021 under the title ‘The Eurasia opportunity’. The writer is director, Institute of South Asian Studies, National University of Singapore and contributing editor on international affairs for The Indian Express.

Undeterred by daughter’s murder, he scripts hope for girls