Friends first: despite some turbulence, Indo-Bangladesh ties have been warm

Maintaining stable and friendly relations with India has been to Bangladesh’s advantage. PM Modi’s visit to Dhaka will be an opportunity for both countries to enhance cooperation. 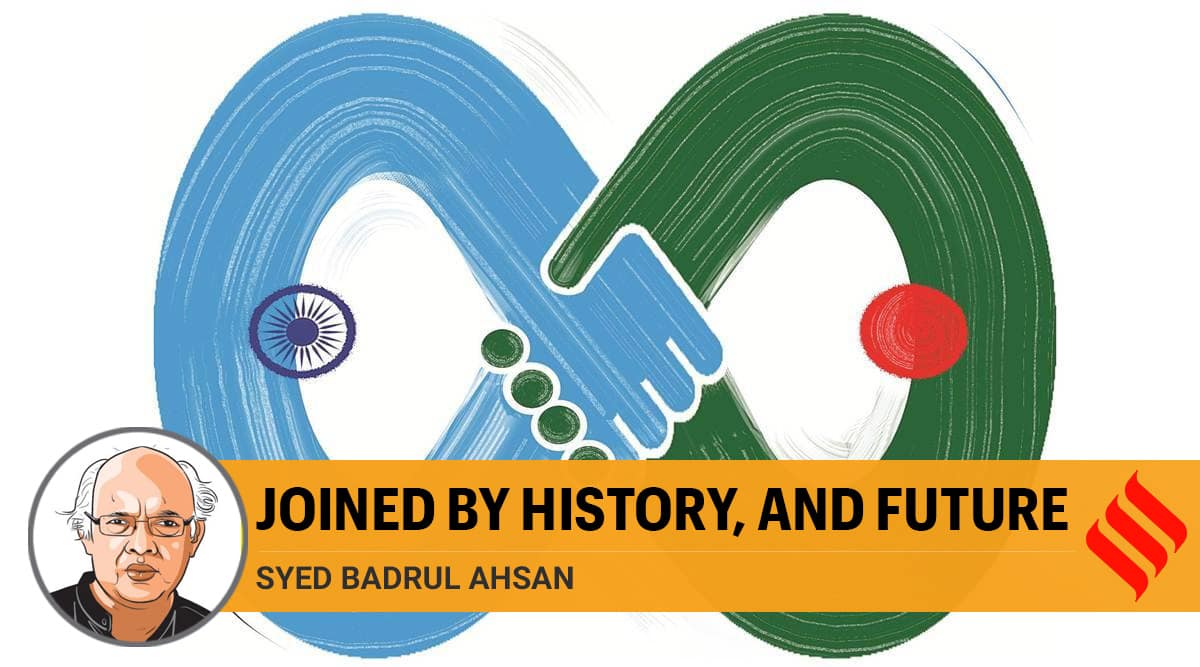 Maintaining stable and friendly relations with India has been to Bangladesh’s advantage in terms of both countries sharing a common position on regional security. Bangladesh’s strong stand against religious militancy and terrorism has resonated with policy makers in Delhi and vice versa. (Illustration by C R Sasikumar)

Fifty years ago, Prime Minister Indira Gandhi and Prime Minister Sheikh Mujibur Rahman, through signing a 25-year treaty of friendship and cooperation between their two countries, solidified the links that India and Bangladesh had forged in the course of the Bangladesh War of Liberation in 1971.

Half a century on, as Prime Minister Narendra Modi arrives in Dhaka to be part of the golden jubilee celebrations of Bangladesh’s independence, it is the enduring nature of the ties between the two nations that takes centre stage. Added to that are two complementary realities, namely, the 50th year of close ties between the two neighbours and the centenary of the birth of Bangladesh’s founding father Sheikh Mujibur Rahman.

Bangladesh’s people, and that includes the generations born and coming of age after 1971, have gratefully recalled the moral, material and diplomatic support India provided in its struggle to free itself of Pakistani repression in a year that began as an annus horribilis but ended as an annus mirabilis. That the Mukti Bahini, the Bengali guerrilla force, was trained in camps in India is part of shared political heritage. That the very first independent Bengali government in history, formed and administered by Mujib’s close political associates and known as the Mujibnagar government, operated from Theatre Road in Kolkata underscores Bangladesh’s historical narrative. Remembered, too, with gratitude are the efforts made by Indira Gandhi toward arousing global concern about the murder of Bengalis in 1971. That 10 million Bengali refugees were cared for by the Indian government and state governments has not been forgotten.

This is the history which is being reinforced as Narendra Modi and Sheikh Hasina get down to business in Dhaka. On what will be his second visit to Bangladesh since taking office as India’s Prime Minister, Modi can certainly expect a warm reception. And yet, he and his Bangladeshi counterpart are also aware of the hiccups which have sometimes disturbed the waters. For Bangladesh’s people, the failure of Dhaka and Delhi to reach a deal on an equitable sharing of the river Teesta’s waters remains a major concern. With India and Bangladesh crisscrossed by 54 common rivers, Bangladeshis often can’t comprehend why the Teesta issue remains unresolved.

Another concern for Bangladeshis has to do with the killings of their compatriots by India’s Border Security Force along the frontier between the two countries. While it is understandable that smuggling needs to be dealt with firmly, it is not acceptable for Bangladeshis that rather than apprehending or detaining cattle smugglers or people trying to make an illegal entry into India, the BSF has been shooting them. A number of meetings between the BSF and Border Guard Bangladesh have taken place, but not much has changed.

Then comes the broad picture. The ratification of the Land Boundary Agreement by India a few years ago earned the appreciation of Bangladeshis. And with that comes the other reality of the Indian and Bangladesh governments cracking down on terrorism. Sheikh Hasina’s government has ensured that no militant outfit finds space in Bangladesh or engages in subversive activities against Delhi from Bangladesh’s territory. Such cooperation between Delhi and Dhaka has enhanced trust to a point where, in broad perspective, a commonality of objectives defines relations between the two nations. It would, at this point, not be out of place to note that when the BJP took power in Delhi in 2014, fears were generated in Dhaka as to whether a secular Awami League government could handle the rise of a rightwing government in India.

Those fears were neutralised by the warmth which, from the very beginning, characterised links between the two governments. That is not to suggest that people in Bangladesh remain oblivious to such measures in India as the CAA. They remain wary of conditions which might develop in Assam, with probable ramifications for Bangladesh. And, at this point of time, Bangladeshis are keeping close watch on the electoral scene playing out in West Bengal. In Dhaka, fingers remain crossed. Mamata Banerjee, despite her position on the Teesta, has generally struck something of a chord on this side of the political frontier.

Maintaining stable and friendly relations with India has been to Bangladesh’s advantage in terms of both countries sharing a common position on regional security. Bangladesh’s strong stand against religious militancy and terrorism has resonated with policy makers in Delhi and vice versa. In the field of trade, there is certainly a gap in terms of exports and imports, but again, it is geography which has often determined conditions. While India has given duty-free access to a number of Bangladeshi goods, its physical enormity precludes circumstances that could have Bangladesh enhance the quantum of exports. While the gap between the countries’ exports to each other seems worrying, for Dhaka the redeeming factor is its economy, which is currently one of the fastest-growing in the world.

Modi’s visit to Dhaka, as Indian Foreign Secretary Harsh Vardhan Shringla has noted, will be an opportunity for the two countries to enhance cooperation through some new MoUs. Meanwhile, the inauguration of the Chilahati-Haldibari railway link has been a significant move in enhancing connectivity between the countries. Bangladesh has received 9 million doses of Covishield vaccines from India — a gesture that has enormously boosted morale in Dhaka as it battles the pandemic.

The Modi-Hasina talks could well be a fresh opportunity for Bangladesh to emphasise to India the need for meaningful pressure to be applied to Myanmar over the Rohingya issue. Dhaka has been disappointed with the inability or reluctance of Moscow, Beijing and Delhi to help it out of its predicament. As the two prime ministers join in the celebrations in Dhaka, Bangladesh’s leader may well find the moment opportune to buttonhole the visiting Indian head of government on the Rohingya issue.

This article first appeared in the print edition on March 26, 2021 under the title ‘Joined by history, and future’. Ahsan is a senior journalist based in Dhaka author of Sheikh Mujibur Rahman: From Rebel to Founding Father. Syed Badrul AhsanAhsan is a senior journalist based in Bangladesh, and author of ‘She... read more