In sports, don’t ignore the rest while rooting for the best

Dhiraj Nayyar writes: For those who don’t become world beaters in sports, a good education would ensure a high standard of life in some other profession. Gold medalist Neeraj Chopra poses during the medal ceremony for the men's javelin throw at the 2020 Summer Olympics in Tokyo. (AP/PTI Photo)

India loves a champion in sport. It wants many more. That it requires more money and better infrastructure spread out across the country is well known and often repeated. But what is also needed is a less tangible element which is often missed out in the discourse on how to create more medalists at the highest level — empathy, love and reward for those who will never win a Gold, Silver or Bronze. India celebrates achievement, now it even embraces failure (provided it is followed by success). But it has antipathy for those who straddle the vast middle between the top of the class and those detained for a repeat year.

That may sound counter-intuitive given that the vast majority falls in precisely the “in-between” or “average” category. It’s human instinct to be comfortable amongst one’s own type, so it would be reasonable to assume affinity with other unexceptional people. But it is overpowered by another human instinct — the Darwinian one — to be the fittest (best). Since, by definition, it’s impossible for everyone to be the best, there is vicarious comfort in seeing one’s own become a champion. Society is ready to shower them with recognition and reward.

That is not particularly useful in creating champions. Rarely, if ever, do sporting greats come readymade. Raw talent needs to be nurtured. But it is only in very few individuals that talent converts to greatness. Therefore, the bigger the talent pool, the likelier it is that more champions will emerge. However, if there is no reward for striving hard but falling short, parents are unlikely to send their children into sports. The risk is too high.

It is a folly to equate being average with being mediocre. One can strive to the best of one’s ability and not become a champion. Mediocrity describes those who do not put in their best effort. Two things need to change fundamentally for India to create more champions. First, the education system needs to be more flexible to enable the young to maximise sporting ability without being treated as pariah “quota” students. The choice that is usually forced upon students in the Indian system is between doing well in academics and excelling in sports. In the West or even in an emerging sporting nation like China, this is a false binary.

For those who don’t become world beaters in sports, a good education would ensure a high standard of life in some other profession. There may be some sports which will never deliver the kind of monetary returns that cricket does. An alternate post-retirement career path for students who pursue such sports is also required. A second change must come from employers. It is important to recognise that people who have spent a long time playing professional or even semi-professional sport bring certain skills like teamwork, discipline and problem solving which the bookish type with a plethora of degrees may not. They should have an equal pathway to professional success outside sports. Employers must give credit for years spent in professional sport as work experience so that they are not disadvantaged vis-à-vis those who began a professional non-sports career at an earlier age.

It is interesting how so many sportspersons in India end up in clerical or relatively low level jobs in government. Before winning her Silver Olympic medal Mirabai Chanu was a ticket collector in the Railways. Some others are junior commissioned officers of the armed forces. Perhaps Subedar Neeraj Chopra will now rise up the ranks after winning an Olympic Gold, but suppose he had not, should there not have been a pathway for him to become a commissioned officer?

That even some of our non-Gold Olympic medalists have expressed their wish to get a government job above all else shows what little economic prospects there are for toiling sportspersons who don’t capture the nation’s imagination with a Gold.

Champions exist because the rest of us are average. In the quest for gold, let us not forget the rest.

This column first appeared in the print edition on August 17, 2021 under the title ‘Manufacturing Champions’. The writer is chief economist, Vedanta 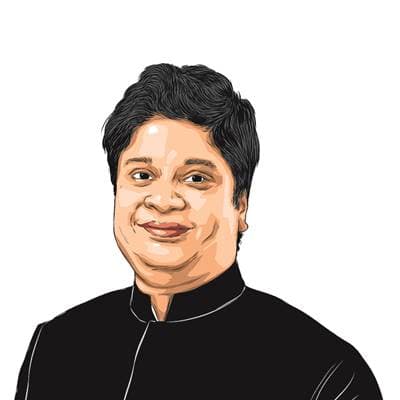