How Congress won Himachal Pradesh without its central leadership

Congress drew from its pool of local elites to push its candidates. But now, infighting will be its biggest challenge 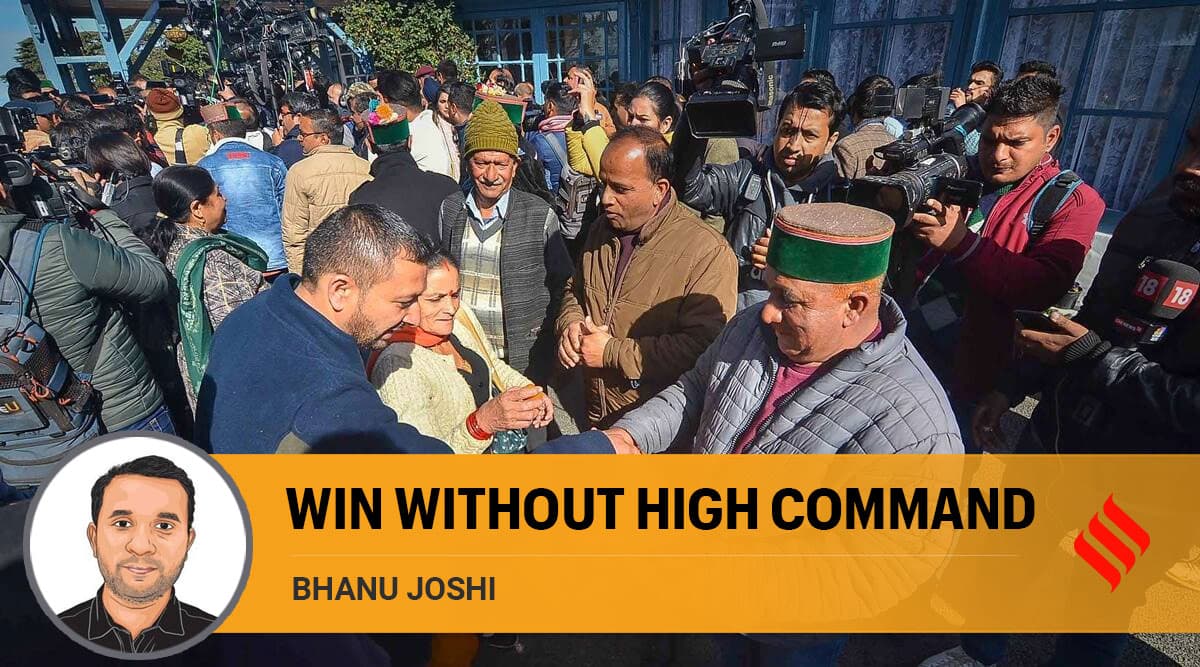 Hemmed by the demise of the iconic Virbhadra Singh and the non-existent central leadership, the reliance on personal votes became the default strategy for the Congress party. (PTI)

“Changing political parties is akin to cutting your body from the head. I will die but not shift allegiance,” said a woman in the Sundernagar Vidhan sabha, while waiting to pick up her son from a government school.

Also Read |Himachal Pradesh results: Difference of 37,974 votes made all the difference for Congress over BJP

Theoretically, democracy’s most essential tasks are performed through parties, which are mechanisms through which power is exercised. Schattschneider’s oft-quoted observation that democracy is “unthinkable save in terms of parties” is a good start to understanding these results. Political parties are multileveled and internally diverse, but the artistry of the BJP has been in putting up a coherent front, levelling all discontent. In Himachal, though, the inner contradictions of the party and its constituents offer a preview of what the fissures within the hegemonic party look like.

Consider the Jaswan-Pragpur constituency where the BJP candidate and minister in the incumbent government, Bikram Singh, was challenged by two independents affiliated with the larger BJP family. Sanjay Parashar, with an RSS background and Mukesh Kumar, president of the transport union and the minister’s former aide. The “three BJP candidates” represent the contradiction a voter faces between the favoured candidate of the high command, the local RSS man in charge of acting as the conduit between the Sangh, the party, and them, and the contractor who made money from irrigation and public health contracts but gave the locals free transportation during the pandemic among other services. “My vote is with the party candidate, but azad (independents) will take away their personal votes,” quips an older man sitting on the wooden bench waiting his turn at the panchayat office. Jaswan Pragpur constituency is not an exception. As results pour in, it is clear that the BJP lost at least four constituencies in the Kangra district (the highest number of seats in Vidhan Sabha) due to BJP rebels contesting as azad.

With an average size of about 73,000 voters (2022 elections) and average victory margins of 5,600 (2017 elections), “personal votes” matter. In Dharamshala Vidhan Sabha, a young person talking about the BJP rebel and independent candidate Vipan Nehria tells us, “Dekhiye, caste se jyada, kaam dekha jaata hai, corona mein bahut madad ki but otherwise bhi kaam karte hai.” (Look, more than caste, work is seen, in corona he helped a lot, but he does work otherwise as well.) This personal connection is a double-edged sword — it can ruin the chances of a winning candidate or if the election becomes localised, it can steer through candidates with good work records.

Also Read |What seems to have hurt BJP most in Himachal: Unhappiness with CM, factional fights, yearning for change

Hemmed by the demise of the iconic Virbhadra Singh and the non-existent central leadership, the reliance on personal votes became the default strategy for the Congress party. Given power has changed hands in the state, Congress drew from its pool of local elites — petty contractors, political families, and workers to push its candidates’ personal charisma. In this, it was also helped by legacy voters, like the Dalit man in Nachan Vidhan sabha who told us, “Indira Gandhi nein zameen de kar malik bana diya. Usi ko vote denge (Indira Gandhi made us owners by giving land to the poor. We will vote for Congress).”

Aam Aadmi Party (AAP) had neither the legacy voter nor the boots on the ground. It also relied on its candidates to do the work. Still, with both BJP and Congress candidates saturating the political market and AAPs limited contact with the population, there was little expansion for the party. In addition to being in a state where education and healthcare are better than in other parts of the country, and women’s labour force participation is one of the country’s highest, it dampened any programmatic benefits that AAP promised as it had done in Punjab, Gujarat, and Delhi.

In the past, both the BJP and Congress have relied on charismatic and centralising leaders like P K Dhumal and VB Singh. With their exit, the incumbent, Jairam Thakur, though non-controversial, was seen as nonperforming. The BJP’s overreliance on its central leadership, from ticket distribution to policy decisions, undercutting the cadre and intermediaries is being reflected in the results. While Congress has won these elections, its lack of a formal process for incorporating new groups or generating leaders with a popular base will continue to plague the party. It will prove harmful to both their personal interests and the stabilisation of the party system.

The results are consistent with work on state elections where we find that political parties increasingly rely on centralising state leaders. Combining personalistic appeals with limited welfare benefits (mostly cash transfers) and undercutting any intermediaries, including elected leaders, is becoming the model for winning elections. Mamata Banerjee, Yogi Adityanath and Jagan Reddy are examples of how leaders have centralised power, building direct connections with their voters.

In Himachal Pradesh, the absence of a centralising state leader and programmatic incoherence in the BJP led to its defeat — just three years after it got a spectacular 69 per cent in national elections. For the Congress, the lack of intraparty democracy, with no formal mechanisms to challenge hierarchies, regulating conflict within the party for the next five years would be its primary challenge.

Joshi is a PhD candidate at Brown University

Your personal data is available on bot market for just Rs 490: NordVPN