How are Rajya Sabha members punished for misconduct in the House?

P D T Achary writes: The Rules of the House do not empower Parliament to inflict any punishment on its members other than suspension for creating disorder in the House. 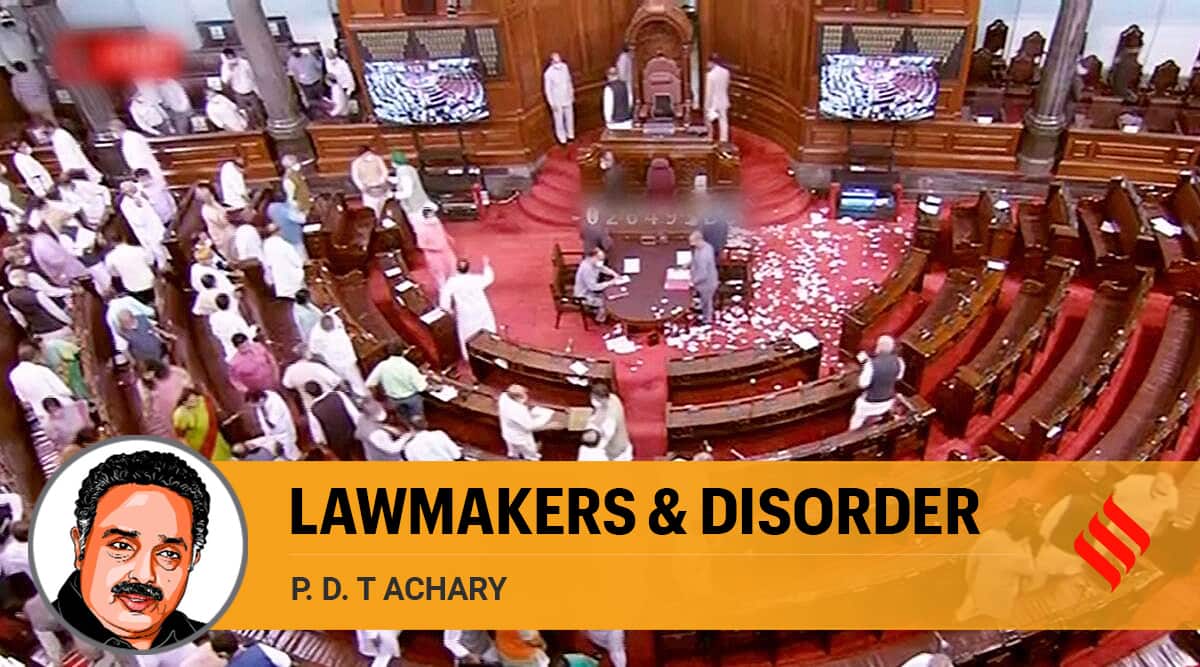 A view of the Rajya Sabha during the Monsoon Session of Parliament, in New Delhi. (RSTV/PTI)

The Chairman of the Rajya Sabha is reportedly contemplating action against MPs who, he thinks, were involved in the fracas in the House. There is speculation in the media about what kind of action will be taken against those MPs. There is also speculation about the formation of a special committee to suggest severe punishment. It appears that the Rajya Sabha secretariat has prepared a report on the incident, which accuses some MPs of assaulting security personnel. The MPs, on the other hand, have alleged that strangers in blue uniform were allowed inside the House who roughed them up.

House rules vest in the chairman all the powers necessary to conduct proceedings smoothly. The rules also provide for the suspension of MPs who “disregard the authority of the Chair or abuse the rules of the Council by persistently and willfully obstructing the business of the House”. However, the power to suspend a member is vested in the House, not in the chairman. The chairman names such a member whereupon a motion is moved by the Parliamentary Affairs Minister, or any other minister seeking the suspension of the member. Under the rule, the maximum period of suspension is for the remainder of the session. A suspended member cannot enter the chamber or attend any meetings of the committees. He also cannot give any notice for discussion or submission. By convention, a suspended member loses his right to get replies to his questions. Thus, suspension from the service of the House is regarded as a serious punishment. But, surprisingly, the rules do not spell out the disabilities of a suspended member. These are imposed on them as per conventions or precedent.

Suspension is the only serious punishment provided for in the rules. Rule 256 of the Rajya Sabha’s Rules of Procedure specifies the acts of misconduct: Disregarding the authority of the chair, abusing the rules of the council by persistently and willfully obstructing the business thereof. A member can be punished for any of these acts and, usually, the punishment is immediate. Punishing members long after the occurrence of misconduct is very rare. Suspension for the remainder of the session makes sense only when they are suspended immediately after the misconduct has been noticed by the chair. For the acts of misconduct by the MPs outside the House, which constitute a breach of privilege or contempt of the House, usually the privilege committee investigates the matter and recommends the course of action and the House acts on it.

A special committee is appointed usually when the misconduct is so serious that the House may consider expelling the member. Such occasions have been few and far between. The first case of expulsion occurred in 1951 when a special committee was appointed to investigate the conduct of H G Mudgal, an MP who accepted financial benefits from business houses to canvass support for them in the government and Parliament. The committee found him guilty of misconduct, which was derogatory to the dignity of Parliament. He was expelled. Another special committee was appointed in 2005 to inquire into the issue of MPs accepting money for raising questions in Parliament. This followed a sting operation done by a private body of investigative journalists. Ten MPs were expelled in connection with this episode.

So, special ad-hoc committees are appointed only to investigate serious misconduct by MPs outside the House. No special committee is required to go into what happens before the eyes of the presiding officer inside the House. As per the rules of the House, they need to be dealt with then and there.

This column first appeared in the print edition on August 21, 2021 under the title ‘Lawmakers & disorder’. The writer is former secretary general, Lok Sabha.