Hijab verdict will only push Muslim women further to the margins 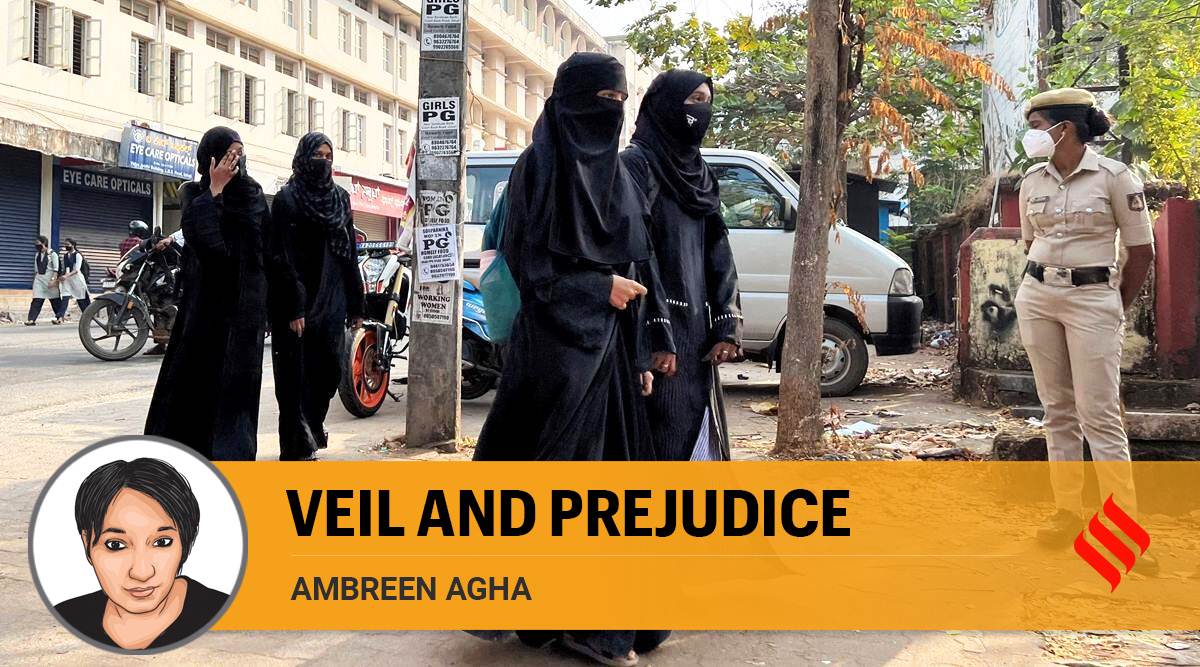 The ongoing hijab controversy — with the state and its institutions as equal participants – is another manufactured event that indicates the deepening of cultural tensions between the Hindu majority and the Muslim national minority. Stridently embracing a masculinist approach of “rescuing” Muslim women, the Karnataka High Court’s judgment pronounced that the hijab is not an “essential religious practice in Islam”. In doing so, the court seemed to ignore two interrelated ideas: Firstly, the primary human impulse of seeking freedom (guaranteed in and safeguarded by the Constitution), and secondly, that this freedom can be realised from the fluidity that lies in the practice of Islam, a point implicit in its own verdict. If the religion doesn’t sanction punishment for not wearing the veil, why is the state determined to deprive a whole generation of young hijab-wearing Muslim girls from pursuing education?

If the state continues to exercise prejudice against the hijab-wearing girls, depriving them of their fundamental rights, it will be the beginning of a new chapter of “historical disadvantage” in the political history of modern India. What is ironic is the glaring dissonance between India’s global aspirations and pursuit of collaborations, internationally, and a steady slide into inequality, domestically.

In this sweep of insidious currents of hostility towards the largest minority of the country, the state and its institutions seem to be on a path to systematically disempowering the community. This is, arguably, a fallout of the failure of liberal feminist politics and its longstanding view of the hijab as a sign of “increasing Arabisation” and an “instrument of oppression”. This biased and ill-informed view of liberal secular feminists led to the creation of a figure of an undesirable “other”, which rigidified the liberal and the conservative binaries within the mosaic of Islam and its followers. It is these mythical categories of the liberal and the conservative that has made the latter an easy target of Hindu authoritarianism in successive years of its ascendancy.

The retreat of the secular in India lies in the liberal gaze on the undesirable “other” – the hijab-clad Muslim woman – inescapably imbued with hostile perception and a “saviour complex”. In fact, the hijab has lived out its literal meaning (a “separation”) in Indian society, acting as a wall, or a medium to disengage, distance, and, subsequently, alienate. As a “central axis of difference between Muslim and non-Muslim societies” (Leila Ahmad, 1992), hijab has been made to function as a universal signifier of “backwardness”. However, in critiquing the Hindu right’s brazen violation and criminalisation of fundamental rights of Muslim women and holding accountable the liberal politics of policing [Muslim] bodies to impose their conception of “modernity”, I do not want to overlook the structures of patriarchy that exist and operate within Muslim societies that have over decades imposed “modesty” either through conformity or coercion.

What is lost in this contestation between “modernity” and “modesty” that embody two forms of patriarchies is the history of the changing meaning of the veil in different times and contexts — as a symbol of power, ideology, and identity, a commodity reinforcing capitalist production of desire, and a metaphor for the visible/invisible female body. Moreover, the polarising politics over clothing and mundane sartorial dilemmas — to change or continue with the practice — denies the existence of an assortment of Muslim bodies, negates Muslim women’s agency, and absolves the state of its responsibility to protect and empower its minorities – both national and immigrant.

The diverse history of the hijab is indicative of the relationship that exists between political transition and the construction of gender in any Muslim society. The bodies of women have been sites of political transformation — the change in the clothing of women reflects the change in politics. To view the practice of veiling with prejudice is nothing short of robbing the faith of its alternative histories and an expression of Islamophobia — subtle or blatant. The women’s rights movement, with and without the hijab, is a legitimate part of the larger political struggle for dignity and integrity in both contemporary Muslim majority and non-Muslim majority societies, like India.

It is in India that sartorial politics has reached its nadir. It started with the anti-CAA protests where the (Muslim) protestors could be “identified by their clothes” to the recent incidents where Muslim women were forced to remove their hijab. This prejudiced external behaviour (of the state and the society) can impact the mental life of the Muslim community with far-reaching effects.

As collective trauma among Muslims builds up and transforms into collective memory, it is important that the Indian state plays the role of an emancipator, and not an oppressor. Now that the hijab case waits to be heard in the Supreme Court, what needs to be seen is if the state will triumph in preserving the long tradition of social diversity amidst the global wave of anti-Muslim prejudice?

This column first appeared in the print edition on March 29, 2022 under the title ‘Veil and prejudice’. The writer is Associate Professor & Assistant Dean for Academic Affairs (Undergraduate Programmes), O P Jindal Global University