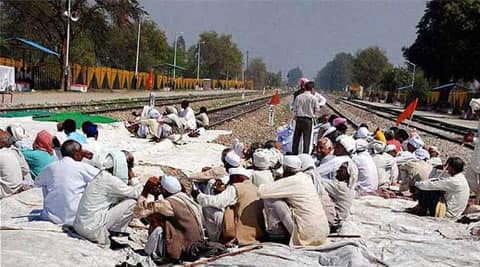 The non-Jat communities of Haryana often complained about the discrimination they encountered because of the caste bias of the state level administration.

The Jats, without doubt, have been the most important and powerful caste community in the rural landscapes of northwest India. The sources of their dominance have typically been their control over agricultural lands, their demographics and their networks beyond the village. However, unlike the other “dominant castes”, such as the Marathas of Maharashtra, the Patels of Gujarat, the Reddys and Kammas of Andhra Pradesh or the Lingayats of Karnataka, the Jats of northwest India have also been the “superior-most” community in terms of their status in the local rural caste hierarchies. Even though the institution of caste is pretty strong in the region, the hold of Brahmanical ideology has always been rather weak. The values of khudkasht (self-cultivation) that have dominated this region for long also provide the frame of reference for social hierarchies of caste in the region. No one was as good as a zamindar, and the category did not imply an absentee landlord here, as it did in Bengal, Bihar or eastern UP. Anyone who cultivated his own land and did not have to work for others as a farm labourer could qualify to be a zamindar, provided he belonged to the right caste community.

Even a Brahmin in rural Haryana would choose to identify himself as a zamindar if he owned agricultural land. However, given the social, cultural and economic significance of land, only the most valued could own it. Landownership and social status have been synonymous in the region. During my fieldwork in Haryana, I found rural Brahmins easily conceding to the status superiority of Jats and other landowning dominant caste communities. No wonder Dalits in the agrarian landscapes there have been almost completely landless. It is their landlessness, and not their “ritual status”, that accounts for their vulnerability in rural areas. Caste in the region has always operated within the framework of land relations. The Banias, Brahmins or Punjabi Khatris/ Aroras could claim superior status in urban centres but never in the rural areas.

It is perhaps easy to explain the eagerness of the UPA government to include Jats in the OBC list — it appears to be a desperate electoral tactic. What is more difficult to explain is the widespread aspiration among Jat leaders to get themselves included in the list. Even though “backwardness” in this context is a statist category or a legal status, it also indicates one’s social position in society.

While it is true that some of them are poor, the majority of them in states like Haryana, Punjab and Uttar Pradesh do not lack in confidence or social and economic resources. They can send their children to schools or colleges on their own terms. As scholars like Prem Chowdhry have shown, the Jat leadership had also initiated reforms during the colonial period to create awareness about the need for education.

They have also been well represented in the state system and have been in control of local- and state-level political institutions, without any viable threat to their position. Even in government jobs at the state level, their presence is far from insignificant. In fact, the non-Jat communities of Haryana often complained about the discrimination they encountered because of the caste bias of the state level administration.

Perhaps an easy explanation for the Jat sense of deprivation is the “crisis of agriculture”. The northwest region — Punjab, Haryana and western UP — was at the forefront of the Green Revolution. Jat farmers were among the most prominent beneficiaries of the economic growth witnessed in the countryside during the 1970s. But from the mid-1980s, agriculture began to lose ground. The process of liberalisation further accentuated this. The effects of the agrarian crisis were felt in different ways. Like elsewhere in the country, with generational progression, the size of land holdings has been declining, leading to a downward mobility among agrarian communities. Hence the demand for recognition as “backward”.

But this is not the whole story. The Jat demand must also be located in their growing sense of relative (not absolute) deprivation and in the rapidly disintegrating rural social order. It is not the marginalised Jat cultivator who is articulating the demand for inclusion in the OBC quota but the upwardly mobile Jat elite. Their younger generations, who often study in urban schools, no longer wish to stay in the village and plough the land. But urban spaces and quality education have often been the monopoly of the upper-castes in cities. Even with their economic might and political power, the Jat elite finds it hard to compete with the traditional non-Jat, upper-caste middle classes of urban areas.

It is within these dynamics of rural transformation and post-liberalisation aspirations that we ought to view the Jat demand for inclusion in the OBC list. But the acceptance of their demand could produce an exclusionary effect. The really “backward”, those who are located just above the so-called “pollution line”, the landless and the poor, would lose out in the process. And they are large in number, perhaps much more numerous than the Jats, though not united as a single social category like the Jats.

The writer is professor of sociology at Jawaharlal Nehru University, New Delhi