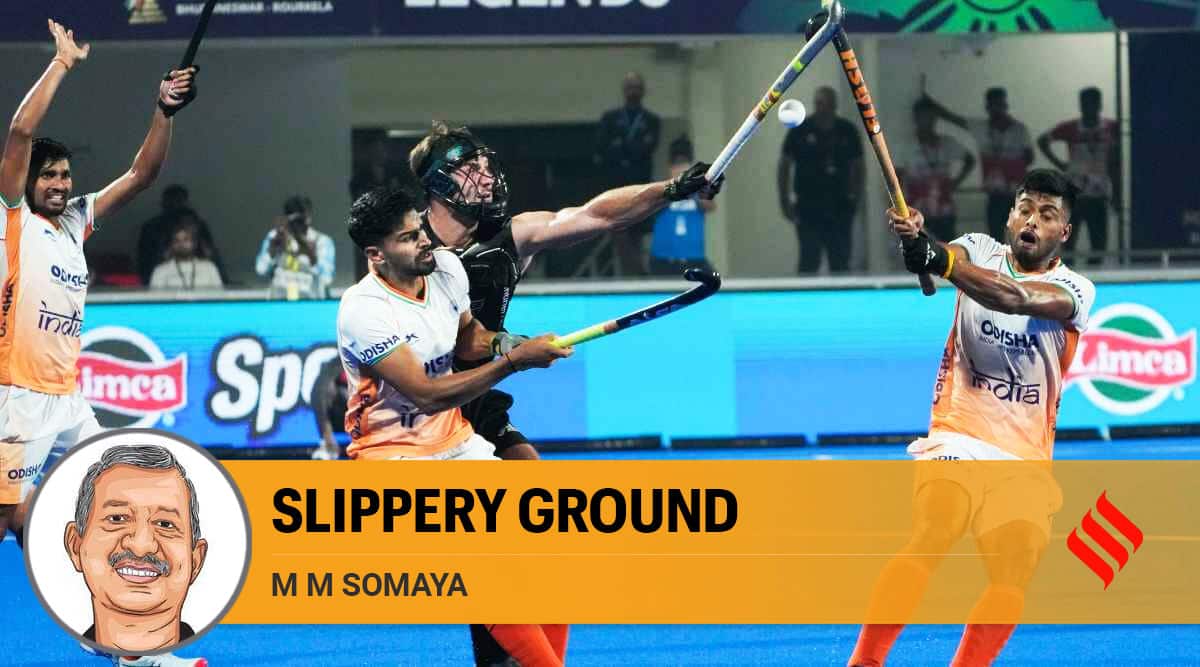 It would be putting it mildly to say I am very disappointed by India’s early exit from the ongoing Hockey World Cup. And as fans, while it will take time to recover from the surprise defeat to New Zealand, it is important to make an objective assessment, not an emotionally-charged one, of why a team that won the bronze medal at the Tokyo Olympics could not even make it into the last 8 of the World Cup.

I saw the team play at the Tokyo Olympics, in certain tournaments after the Games where they were not sending the main team, and I also saw them at the World Cup. The biggest difference between then and now is that we were far better prepared mentally and physically in Tokyo than in Odisha. The physical trainer with the team at the Olympics, Robin Arkell, had worked wonders. Despite playing six-seven matches in severe heat, India never lost the tempo in Tokyo and sadly, I didn’t see that in this team even though the team was almost identical.

The second factor that let us down was our penalty corner conversions. There was too much burden on Harmanpreet Singh — he was made the captain, performed the duties of the key defender and was also the go-to drag-flicker. We reduced an avenue to score by having just one key drag-flicker and unfortunately, even though he has been our saviour in the past, he was off-colour.

Then, in the central midfield, our creative inputs weren’t forthcoming barring Hardik Singh, who got injured in the group stage. Former captain Manpreet Singh isn’t the force he once was. So, if the midfield isn’t going to create chances, the forward line would be starved. There is scope for improvement with our forward line’s off-the-ball running as well. We were never behind the opponent’s back line — we were always receiving with one or two defenders still to beat. Consequently, we didn’t get a clear chance and the goals we scored lacked fluency.

And lastly, in deep defence, we were throwing ourselves open to counterattacks when we should have been playing with better shape and structure.

All in all, we could have done better in all aspects.

But we must also look at the reasons beyond the field to understand why this happened. There is a lesson to be learnt from every defeat and this can be a good opportunity to look at three key areas where Indian hockey can do better.

At the grass roots, we have numerous private and public academies. But we need to empower the coaches so they can impart holistic training; not just technical skills but also focus on strength and conditioning, nutrition and psychological aspects. We have academies in almost every state; in some places like Punjab, there are up to a dozen hostels so it boils down to the coaches to produce players who can fulfil modern-day requirements.

At its end, Hockey India, the governing body, needs to cast the net wider. Currently, the players mostly come from Punjab, Haryana and Odisha. There are many other centres like Mumbai, Bengaluru, Chennai, Lucknow and Bhopal, which once produced great players but are no longer managing to do the same. We need to understand the reasons for it and must do a lot more to widen our catchment areas.

These players must then be given the right pathways to blossom. The current domestic structure lacks quality and competitiveness for players to grow. As per the current system, Hockey India has separate national tournaments for juniors, academies, institutions and state. As a player, if you play in one championship, you can’t play in another. I am not sure if that’s the best model to follow.

Advertisement
Mihir Vasavda writes |Sacking the coach wouldn’t help Indian hockey, it hasn’t in the past

This replaces the earlier model, where you had one National Championship where the country’s best players and most of the talent were scouted. While this current model may give more people a chance, the competitiveness of those tournaments is diluted. In continuation of this point, it is also important to revive the Hockey India League in its old or a different avatar. The tournament was a game-changer for India as it exposed talent regularly to foreign players and coaches.

But these are all structural changes that will, if addressed now, help in the long term. In the short term, given that Paris Olympics is just a year-and-a-half away, it is important to make some course corrections so that we continue to remain on the podium or even improve the colour of the medal.

Most importantly, I am happy with what coach Graham Reid has done so far. I am not talking about this tournament but overall, what he has done for the last four years with the team is impressive. So, rather than go for a fresh coach and start from the beginning, it will make sense to stay with him for the Olympics and let him complete a cycle. Even Gregg Clark should continue in his role as an analytical coach although I feel he could have done a lot better at this World Cup.

It is also important to add a mental coach in the set-up, given that our players need help in dealing with high-pressure situations.

However, we need to look at the physical trainer’s role and whether this was a case where he required more time or if he was really up to the task. As I mentioned before, the difference between Tokyo and Odisha was the physical preparedness of the players and Hockey India should relook at the personnel responsible for it and get people who are top of the line.

As far as the playing group is concerned, Harmanpreet should be liberated from the burden of captaincy but there shouldn’t be any major changes, given there’s so little time between now and the Asian Games in September, where an Olympic berth will be up for grabs.

As supporters of the team, we need to absorb our disappointment and create an environment where the team can make a comeback. It might feel all doom and gloom at the moment. But India did fight back and pleasantly surprised us at the Tokyo Olympics. There’s no reason to believe they can’t do the same again.