Flying free: Why young India needs to build a relationship with the Tiranga

Apart from evoking memories of our freedom struggle, the Tiranga binds the nation in one spirit. 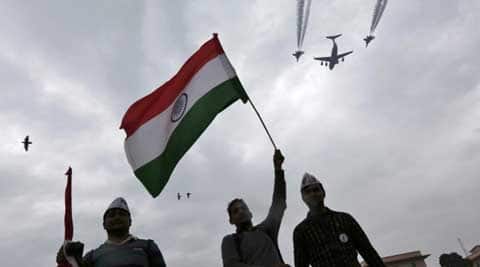 Tirangaa enshrines the soul of our republic and the ideals of its Constitution — unity, sovereignty and secularism.

My inspiration for nation-building and patriotism comes from the colours of the national flag. Saffron is for service to society, white is for probity in public life and green is for sustainable development. Today, we can claim that our national flag is really for the people, by the people and of the people. But it was a long and arduous journey to get there.

As a student at the University of Texas in Dallas in the 1990s, I saw Americans flaunting their national flag quite literally. Whether it was flying flags outside their homes or wearing apparel designed in their “stars and stripes”, Americans’ pride in their country manifests itself in the form of their national flag. I thought, why can’t this happen in India? Even after 40 years of independence, Indians were still not free to fly their own flag and display their national pride when they wanted. When I returned to India, I took the matter up in court on behalf of all Indians.

The Supreme Court gave me the answer in 2004 when, in a historic judgment, it held that the right to fly the national flag freely, with respect and dignity, is a fundamental right of every Indian. Inspired by the judgment, the Flag Foundation of India was established with a vision to popularise the display of the Tiranga by more and more Indians. It is an effort to rekindle the spirit of nationalism. The Foundation is an attempt to build a relationship between young people today and the Tiranga so it becomes a powerful symbol of our struggle for independence and serves as a source of inspiration for Indians across the globe.

Apart from evoking memories of our freedom struggle, the Tiranga binds the nation in one spirit. It enshrines the soul of our republic and the ideals of its Constitution — unity, sovereignty and secularism. Whenever you see the national flag fluttering in the wind with the anthem playing, you are bound to get goosebumps. It is what many of our leaders lived and died for. The three colours in the Tiranga not only symbolise the essential values of life, they are also a liberating metaphor for the fearless struggle of millions of people for self-determination against colonial rule.

Whenever I see the flag, I remember these words by the Father of the Nation, Mahatma Gandhi: “I shall work for an India in which the poorest shall feel that it is their country, in whose making they have an effective voice, an India in which there shall be no high class and low class of people; an India in which all communities shall live in perfect harmony. There can be no room in such an India for the curse of untouchability, or the curse of intoxicating drinks and drugs. Women will enjoy the same right as men. We shall be at peace with all the rest of the world. This is the India of my dreams.”

In many ways, Mahatma Gandhi’s India still remains a dream. Our society is still steeped in casteism and women live in fear. It is up to the youth to carry forth the values of our flag and ensure that the Tiranga flies high.

With the largest youth populace in the world, India is in an enviable position today. The young generation is growing up in an assertive India confident of meeting its aspirations, secure in its abilities. Inclusive growth is the only way India can prosper, and the youth need to be ready to take up the challenge. Unless we involve all sections of society, we cannot grow as a nation. The young need to mobilise people, get involved in decision-making processes even if at the municipal or block level, voice their opinion on matters of importance and partake in training in any vocation. Everyone can’t be a politician or work in MNCs, there have to be farmers, welders, plumbers, electricians, craftsmen to develop India.

We need to engage young minds by giving them an inspiring vision and goal for them to act on for future. A young, ignited mind is the ammunition that will take India to greater heights.

We need inspiring leadership in every walk of life to articulate that vision. India’s transition to becoming a knowledge-based economy and a centre for global human capital hinges on the ability to produce a new generation of educated and skilled people. India’s working population is expected to account for close to a third of the working-age population of the world in the next two decades. Policymakers in India — both at the Centre and across states — need to make skill development and employability their top-most priority.

We do not have the privilege of giving a large number of our young citizens cut flowers. Yet we have no option but to teach them how to grow their own plants. It is here that we have to step in and play the role of responsible gardeners.

Naveen Jindal is a Lok Sabha member of Parliament from Kurukshetra