New demands were placed on 15th Finance Commission. In difficult times, it rose to the challenge

It would be interesting to see the impact of these overarching and revolutionary recommendations in the times ahead. It was in the year 1952 that the First Finance Commission was constituted under the chairmanship of KC Neogy for the period 1952-57. The latest in this chain is the Fifteenth Finance Commission, which has performed the daunting and challenging task of submitting its report in COVID times. This is also the first ever Commission to have given recommendations spanning a period of six years, that is, 2020-26. Though the Ninth and Eleventh Commissions also came out with interim reports, the total span of the Commissions was limited to five years.

The 15th Finance Commission has been in the news due to many new and unique demands which were placed on it, the major challenges being addressing the issue of the 2011 population census evoking a sharp response from the southern states, coupled with other issues like the non-lapsable defence fund and the use of certain parameters for performance incentives. Besides these, the Commission was also required to perform the herculean task of assessing and projecting the fiscal roadmap for the Union and state amid an uncertain domestic environment due to shortfall in the GST collection, further accentuated in the year 2020 by the global pandemic.

The Commission, in its final report, recommended vertical devolution at 41 per cent, adjusting 1 per cent for the erstwhile state of Jammu and Kashmir. For horizontal distribution, it has tried to harmonise the principles of expenditure needs, equity and performance with the introduction of efficiency criteria of tax and fiscal efforts and by assigning 12.5 per cent weight to demographic performance, resolving the demographic debate and incentivising states for the efforts and progress made in moving towards the replacement rate of population growth.

The second core function entrusted to the Finance Commission is to determine the principles which should govern grants-in-aid, assessed on the needs of the states. The Commission has recommended a total grant of Rs 10,33,062 crore during 2021-26, broadly characterised into: (a) revenue deficit grants, (b) grants for local governments, (c) grants for disaster management, (d) sector-specific grants and (e) state-specific grants.

Grants are important as they are more directly targeted and equalise the standards of basic social services to some extent. Many of these grants are linked with performance-based criteria, thereby promoting principles of transparency, accountability, and leading to better monitoring of expenditures. In the Action Taken Report issued by the Union government, mostly all the grants are accepted, barring sector-specific grants (Rs 1,29,987 crore) and state-specific grants (Rs 49,599 crore), which will be considered by the government in due course.

The Commission was also asked to examine whether revenue deficit grants should be provided at all to the states. Some states stressed that revenue deficit grants have serious disincentives for tax efforts and prudence in expenditure and, hence, these should be discontinued. Ultimately, the FFC has recommended revenue deficit grants of Rs 2,94,514 crore for an entire award period. Fiscally stressed states of Kerala (Rs 37,814 crore), West Bengal (Rs 40,115 crore) and Punjab (Rs 25,968 crore) are regular recipients of these grants due to high debt legacy.

With regard to local governments, the grant recommended is Rs 4,36,361 crore during 2021-26. What makes this Commission’s grant different from that of its predecessors is the set of entry level conditions for availing grants in the form of (a) constitution of State Finance Commissions, and (b) timely auditing and online availability of accounts for rural local bodies coupled with (c) notifying consistent growth rate for property tax revenue for urban local bodies. Secondly, the recommendation of tying the local bodies to drinking water, sanitation, solid-waste management and faecal sludge management is in alignment with the national programmes of Swachch Bharat Mission and Jal Jeewan Mission.

It is for the first time that a Finance Commission has recommended Rs 8,000 crore to states for incubation of new cities, granting Rs 1,000 crore each for eight new cities. The focus of urban grants for million-plus cities is improvement in air quality and meeting the service level benchmark of solid waste management and sanitation. However, the most landmark recommendation is channelising the health grant of Rs 70,051 crore through local bodies, addressing the gaps in primary health infrastructure.

The Commission’s recommendation for setting up the state and national level Disaster Risk Mitigation Fund (SDRMF), in line with the provisions of the Disaster Management Act, is both well-timed and necessary. For the first time, the Finance Commission has introduced a 10-25 per cent graded cost-sharing basis by the states for the NDRF and NDMF which has not been appreciated by the states.

To bridge the gap between projected budgetary requirements and budget allocation for defence and internal security and to provide greater predictability for enabling critical defence capital expenditure, the Commission has recommended setting up of a dedicated non-lapsable fund, the Modernisation Fund for Defence and Internal Security (MFDIS), with four specific sources: (a) Transfers from the Consolidated Fund of India, (b) disinvestment proceeds of DPSEs, (c) proceeds from the monetisation of surplus defence land and (d) proceeds of receipts from defence land likely to be transferred to state governments and for public projects in the future. The total indicative size of the proposed MFDIS over the period 2021-26 is Rs 2,38,354 crore. The Union government has accepted this recommendation in principle.

The Commission has also recommended that Rs 1,000 crore per annum should be allocated from this fund for the welfare of families of the defence and CAPF personnel who sacrifice their lives in frontline duties.

The report starts with the famous quote of Mahatma Gandhi: “The future depends on what we do in the present”. It would be interesting to see the impact of these overarching and revolutionary recommendations in the times ahead.

This article first appeared in the print edition on February 17, 2021 under the title ‘The wise arbiter’.  The writer is Rajya Sabha MP and former deputy chief minister of Bihar 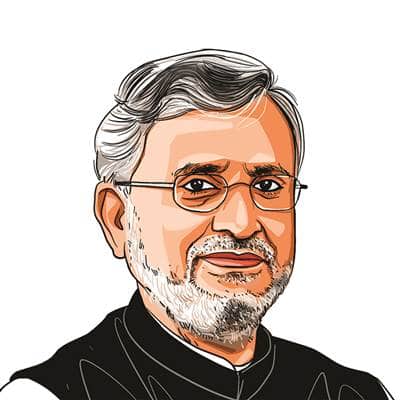