This sickness in our democracy did not begin after Narendra Modi became prime minister. But, it is this storyline that has been sought to be disseminated by secular, leftist political commentators in order to disguise their loyalties to the Congress party. 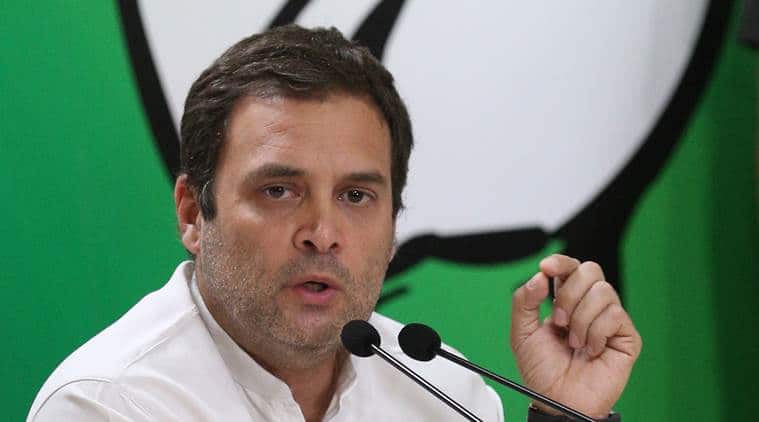 Congress president Rahul Gandhi addresses the press on Saturday in New Delhi. He clearly forgot that if there was one conclusive thing that came out of the Karnataka election results, it was that it was a mandate against the incumbent Congress government. (Express Photo/Amit Mehra)

Three words that I got sick of hearing as the Karnataka drama unfolded last week were: democracy, secularism and Constitution. Nearly everyone who spoke them meant only one thing, and this was that the Bharatiya Janata Party must be kept out of Karnataka at all costs. Perhaps, by the time you read this, the BJP juggernaut will have been stopped from finding a toehold in southern India, but it is important that we remember that whatever happens, it will have nothing to do with those three words.

It is important also to remember that the post-election drama in Karnataka had everything to do with the Congress party’s desperation to keep its own little toe grounded in the state they have ruled for five years. Without Karnataka, our oldest political party has only Punjab and Puducherry left, and this is very bad news. How will Rahul Gandhi continue to dream of becoming prime minister in 2019? How will there be enough funds to fight the Lok Sabha elections if one of India’s richest states slips away? So even the most humiliating compromise with a party derided by Rahul Gandhi as the B-team of the BJP is better than losing power altogether. You realise what a sham ‘secularism’ has become if you remember that during the campaign the (S) in the party’s name was mocked by Congress leaders as standing for Sangh and not secular.

Now let us talk about democracy. Even as B S Yedyurappa was taking his oath of office last Thursday, the president of the Congress party tweeted this: ‘This morning, while the BJP celebrates its hollow victory, India will mourn the defeat of democracy.’ He clearly forgot that if there was one conclusive thing that came out of the election results, it was that it was a mandate against the incumbent Congress government.

On constitutional proprieties the less said the better. They were stretched and moulded last week by most politicians and political commentators to make whichever case they wished to make. What can be said for certain is that the men who wrote our Constitution never envisaged a situation in which the verdict of governors would be challenged by violent thugs on the streets. Or that newly elected legislators would need to be locked up in fine hotels to prevent them from selling their souls for filthy lucre.

It is not as if they need the money. The Karnataka Election Watch and Association for Democratic Reforms analysed the assets of 221 newly elected MLAs and found that 97 per cent were ‘crorepatis’. Of these, 16 had assets worth more than Rs 100 crore. You do not need me to tell you that the main reason why Indians fight and sometimes kill for a ticket to contest elections is because there is no easier way to become very rich very quickly.

This sickness in our democracy did not begin after Narendra Modi became prime minister. But, it is this storyline that has been sought to be disseminated by secular, leftist political commentators in order to disguise their loyalties to the Congress party. It is this ‘secular’ caboodle that uses words like democracy and secularism most often. Sadly, they see the weaknesses in our democracy through tinted lenses. So what happened in West Bengal’s panchayat elections last week has been almost ignored by liberal, leftist commentators. In these village elections, ballot boxes were torn out of polling booths and thrown in ponds, and gangs of armed thugs wandered about violently preventing people from voting. These events escaped the notice of ‘secular’ politicians and commentators who moan endlessly about how democracy has died in the past four years. Rahul went so far as to say in Chhattisgarh that India has become a dictatorship.

To support this ludicrous charge, the Congress president has exalted disgruntled judges who actively harmed the Supreme Court by going public with their disgruntlement. Disgruntled public intellectuals have also sided with the judges and the ‘secular’ media has done its best to provide a platform for their views.

Having lived through that time when there really was a Dictator ruling India, I can report that journalists, writers and poets were jailed for speaking out. It was also a time when disobedient judges got the sack. So the Supreme Court obsequiously went along with the Dictator’s diktat when she ordered them to suspend even the right to life. When the Dictator’s grandson now makes reckless charges, he needs to be reminded of that one period of Indian history when democracy nearly died.

Modi is no match for the powerful elite who lost their vast influence in the public square when he became prime minister. So now when he appears to have lost some of his magic, they have taken charge of the narrative and their message is clear: democracy is doomed if Modi remains in power.

Inside Track: Fast on the draw