Modi does not see poverty as romantic or alluring. Having lived in poverty, he knows the indignities it imposes if you are not a tourist. 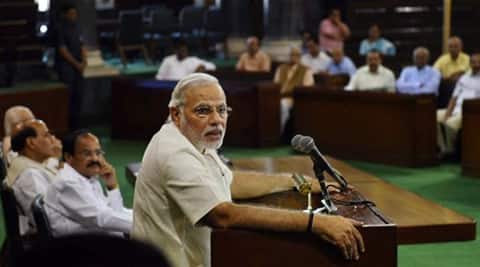 One example of elitism concealed in a socialist tradition will suffice to explain what I mean, even though there are a hundred.

When the Prime Minister made his first speech in the Lok Sabha last week, it heralded the end of an era even more definitely than when he won the election. Political pundits of Leftist persuasion have lamented the end of Nehruvian socialism ever since the coincidence of Narendra Modi being sworn in as prime minister on the eve of Jawaharlal Nehru’s death anniversary. What they never mention, because of undying Leftist fealty to the Congress since Nehruvian times, is how elitist this ‘socialism’ has always been.

One example of elitism concealed in a socialist tradition will suffice to explain what I mean, even though there are a hundred. While the vast majority of India’s citizens live in unsanitary, makeshift housing in squalid towns and villages, their elected representatives live in accommodation that only billionaires can afford in Lutyens Delhi. From this salubrious vantage point, the poverty in which their constituents live seems so romantic to our political leaders that Rahul Gandhi took distinguished foreign visitors on his poverty tours. He even ordered his partymen to make poverty tourism a part of their routine. These orders were rescinded when MPs started taking their cooks, goose down pillows and air-conditioned tents along on these field trips.

Modi does not see poverty as romantic or alluring. Having lived in poverty, he knows the indignities it imposes if you are not a tourist. In his first speech in Parliament, he said eradicating poverty was a priority. He spoke of education as being the most vital tool to eradicate poverty. He went on to speak of the need to provide urban public services in rural India so that all Indians could aspire to a life of dignity. His words were music to my ears. Ever since Sonia Gandhi imposed her ‘Lady Bountiful’ economics on the last government, this column has objected stridently.

Human beings, no matter how poor, want a life of dignity and this is something the Prime Minister understands well. From this comes his commitment to an India that has clean, sanitary towns and villages in which every Indian has a pucca home with running water and electricity. It seems a simple enough dream, but it was not one that Sonia and her NGO advisors could see, because in their romanticised vision of poverty, all that needs to be done for the poor is to throw crumbs their way. Nobody noticed that no matter how much cheap food grain and rights to jobs and education they flung at the poor, it did not make up for the absence of real jobs and real schools. The irony is that they called these policies ‘inclusive’ when they were not just elitist, but disdainful.

Meanwhile, Sonia’s NGO advisors and her NGO environment minister closed down projects that could have created real jobs in some of India’s poorest states. No government has been more well-disposed to the NGO sector than the one just gone and the result is that there is now an NGO for every 600 Indians. Most of these NGOs are frauds, so this columnist was delighted to read the Intelligence Bureau report that exposes their fraudulence. But NGOs were useful to the last government because they provided a useful veil for the elitism and corruption that lay beneath.

Scan through the names of the recently defeated younger Congress MPs and you will see that they are nearly all heirs. If that is not corruption already, then ask yourself why so many politicians want their children to inherit their constituencies? Is it not because politics has become a profitable family business? Unfortunately, this venal commerce has been embraced by nearly every political party, including the BJP. One reason why the advent of Modi was opposed by senior BJP leaders was because they saw that he might put an end to the ‘socialist’ elitism that they have become so accustomed to.

So will everything change now that Modi is Prime Minister? It will not be easy to end a political culture that has become engrained deeply in political parties across the country. But a good beginning is to start dreaming a new dream for India and this thankfully has already happened. The Prime Minister reminded MPs that they were guardians of the hopes of more than a billion people and not in Parliament just to enjoy the fruits of power. Next time he draws their attention to this, he should add that people are no longer as patient as they once were. They are impatient, angry and desperate for the development and change that he promised during the campaign. The veils of ‘socialism’ that concealed the deeply elitist and corrupt nature of our political culture have now fallen away, so it is very, very important that those who sit in the Lok Sabha remember who voted for them and why.

Flip side: Signs of the times