Women farmers are at Delhi borders as equal stakeholders, demanding a voice

The “feminisation of agriculture” in the face of the agrarian crisis has, paradoxically, left women doubly even triply disadvantaged. Yet their concerns still remain largely unaddressed in policy. Women, including widows and relatives of farmers who were believed to have killed themselves over debt attend a protest against farm bills, at Tikri border near Delhi. (File/Reuters)

The large presence of women farmers at protests at Singhu, Tikri, and, lately, the Ghazipur borders of Delhi against the three new agriculture laws, marks a significant moment in the continuum of women’s political mobilisation in the country.

Coming against the backdrop of the Supreme Court observation that women and children should not be protesting at the borders, the Women’s Farmers Day events in January led by the contingent from Punjab triggered similar rallies in several districts of the country.

In their somewhat “unorthodox” modes of protest, women drew upon the symbolic and performative lexicon that legions of “disobedient” women have employed for decades, both globally and nationally, in “voicing democracy and reclaiming citizenship”.

From carrying portraits of their sons and husbands who have died by suicide on account of agrarian distress; to holding tractor rallies; reciting poetry; performing skits; “manning” and guarding the public stages; singing, picketing and “cooking” up a storm at the langars that supplied food to protesters camped in the cold, they invoked shared traditions of women’s political activism. Their mobilisation over the last several months, especially in Punjab, also involved raising consciousness through villages, markets and gurdwaras, to “sit-ins” at sites of corporate power, raising the crescendo with pit siyappa (songs of mourning).

Their attempts to build solidarities across fault lines of caste, class and calling, have drawn into their fold members of Dalit landless labour unions, women students from farming backgrounds and others who share a deep anguish about a precarious future and the loss of land and livelihood. Not imprisoned by the mantle of purely “women’s issues”, they are here as equal stakeholders — as cultivators, tillers, seed keepers and reapers, managers of livestock, poultry and some forest produce, demanding a voice in the unfolding denouement.

Women have historically crafted innovative idioms of engagement against “muscular” politics. Rejecting the artificial separation between the “private” and “public”, they symbolically bring women’s bodies and artefacts of the domestic sphere and care-giving into public spaces, as Gandhi had effectively done, to flip the association of valour with masculinity.

From the 1970s on, in several non-violent struggles like the Chipko Andolan, protests at the Baliapal Missile sites, Koodankulam, the Koel Karo dam, through the Bhopal Gas Peedith Mahila Andolan, and the Sardar Sarovar Dam Satyagraha, women expanded their canvas to include issues of livelihood, development dislocation, access to resources, calling out state protection of powerful vested interests.

The female body became a site of protest and a “weapon of the weak” in Irom Sharmila’s indefinite fast to protest the wanton killing of innocent civilians and to demand the repeal of AFSPA in Manipur. Similarly, the nude protest of 15 women outside the headquarters of the Assam Rifles in Imphal in 2004, following the alleged rape and custodial death of a young activist had evoked stunned attention.

Shaheen Bagh was an inflection point in the current possibilities and limits of women’s non-violent struggles. In asserting citizenship beyond minority identities and making common cause to recover the “living” Constitution of the republic, women shone the light on the limits of representative politics to speak to the power of the participatory public.

In India, while 85 per cent of rural women are engaged in agriculture, only about 13 per cent own land. The agricultural sector employs 80 per cent of all economically engaged women — with 33 per cent in the labour force and 48 per cent as self-employed farmers. How much does their current struggle draw on their own quotidian experience of exclusion from ownership and decision-making? While this does make them natural allies in mobilisations for justice, equity and dignity, they have not been in leadership roles. There is not a single woman in the 35-member farmer delegation chosen to negotiate with the government.

They are disappointed by the unfortunate events in Delhi on Republic Day that have tarnished the non-violent credentials of their movement. It is difficult to gauge whether a substantive reconfiguration of gender relations will inform its future trajectory, or be cognisant of the overwhelming turnout at the Kisan Mukti March in 2018 to push for the resurrection of the Women Farmers’ Entitlement Bill proposed by M S Swaminathan in 2011. Yet their resolve to stay the course and garner greater support continues unabated.

It is estimated that between 2000 and 2015, around 16,000 farmers and rural labourers took their own lives in Punjab, primarily on account of farm debt. Thirteen per cent of them incurred debt that was greater than their income of two years. Those widowed, carried the liabilities without unfettered ownership of their furrowed fields. They have begun mobilisation around a Kisan Mazdoor Khudkushi Peedith Parivar Committee to call out official insouciance as responsible for their plight.

As more and more men move out of agriculture, especially in Punjab, and leave for precarious jobs in towns and cities, women are left to fend for their families. The “feminisation of agriculture” in the face of the agrarian crisis has, paradoxically, left women doubly even triply disadvantaged. Yet their concerns still remain largely unaddressed in policy.

There is little doubt that the farm sector is in need of robust reform. The many contestations around MSP must be addressed. At present, however, the ability to listen and the power to be heard appear severely compromised. Between the seeming intransigence of competing positions lies a huge trust deficit. In the meanwhile, as they protest, women farmers reveal to us the myriad colours of resistance.

This article first appeared in the print edition on February 16, 2021 under the title ‘A woman’s place in protest’. The writer is chair, Centre for Policy Research and founder-director, Women in Security Conflict Management and Peace, New Delhi. 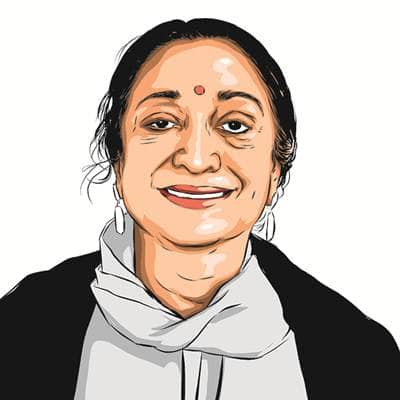