On farm bills, government must get its act together, but Opposition is misguided

The Congress is leading the charge. But its manifesto for the 2019 general election said, “Congress will repeal the Agricultural Produce Market Committee Act and make trade in agricultural produce — including exports and inter-state trade — free from all restrictions”. 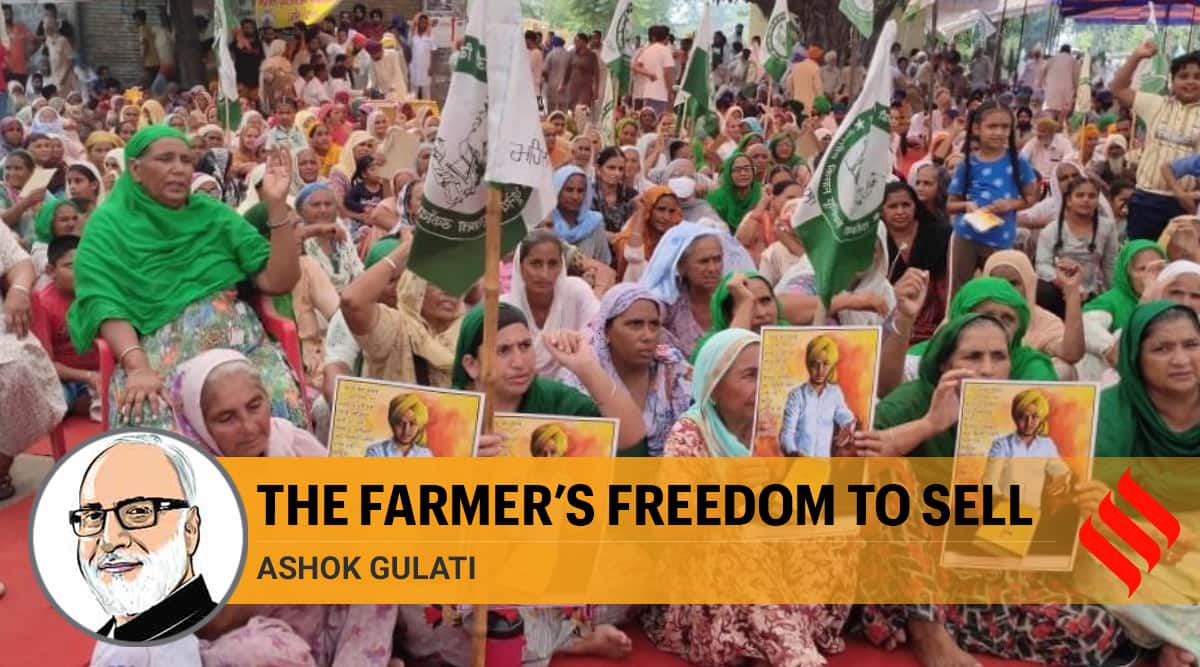 Farmers say that for them, Bhagat Singh was not just a freedom fighter but a revolutionist, a philosopher, an ideologist and a guide. (Express Photo)

The passing of the farm bills in both the Houses of Parliament has sparked a major controversy in the country. The government claims that it is a historic step taken in the interest of farmers, giving them the freedom to sell their produce anywhere in the country and to any one they want. But the opposition parties described the passing of the bills as a “black day” because these pieces of legislation could destroy the existing system of minimum support price (MSP) and the APMC markets, leaving farmers at the mercy of big corporations.

Where does the truth lie? Let us dig a little deeper into the economics and politics of it.

The bills — The Farmers Produce Trade and Commerce (Promotion and Facilitation) Bill, 2020 (FPTC); The Farmers (Empowerment and Protection) Agreement on Price Assurance and Farm Services Bill, 2020 (FAPAFS); and The Essential Commodities (Amendment) Bill, 2020 (ECA) — have to be seen in totality. Essentially, the FPTC breaks the monopolistic powers of the APMC markets, while FAPAFS allows contract farming, and ECA removes stocking limits on traders for a large number of commodities, with some caveats still in place.

The economic rationale of these pieces of legislation is to provide greater choice and freedom to farmers to sell their produce and to buyers to buy and store, thereby creating competition in agricultural marketing. This competition is expected to help build more efficient value chains in agriculture by reducing marketing costs, enabling better price discovery, improving price realisation for farmers and, at the same time, reducing the price paid by consumers. It will also encourage private investment in storage, thus reducing wastage and help contain seasonal price volatility. It is because of these potential benefits that I had compared these pieces of legislation to the de-licensing of industry in 1991 (‘A 1991 moment for agriculture’, IE, May 18). I had also suggested that for these legal changes to deliver results, we need to create Farmer Producer Organisations (FPOs) and invest in marketing infrastructure. In that context, it is good to see that Prime Minister Narendra Modi has initiated programmes for the creation of 10,000 FPOs and an Agriculture Infrastructure Fund (AIF) of Rs one lakh crore to handle post-harvest produce, anchored largely with FPOs. NABARD has been entrusted to implement this along with other agencies and state governments.

I must caution that sometimes good ideas/laws fail because of bad implementation. Just to cite an example, late Arun Jaitley had announced a scheme called TOP (tomatoes, onions and potatoes) to stabilise the prices of these farm products through processing and storage. He also allocated Rs 500 crore for it. The scheme was entrusted to the Ministry of Food Processing for implementation. But even after three years of the scheme, not even 5 per cent of the money promised has been spent. No wonder, the government is back to export bans of onions, fearing a spike in onion prices. This is contrary to the signal that the government wants to give through the farm bills that farmers have freedom to sell.

It seems the government has one foot on the accelerator to liberalise agri markets, and the other foot is on the brake (ban on onion exports). All this dents its credibility. I am saying this to emphasise that NABARD has a lot of heavy lifting to do, else they will fail the country by not realising the full potential of these legal changes. NABARD must get its act together, take professional advice and work with implementing agencies in the private sector, including various foundations already working with farmers. The pay off will be very high. It will make Indian agriculture globally competitive, and benefit farmers and consumers alike.

But then why is there so much opposition? The Congress is leading the charge. But its manifesto for the 2019 general election said, “Congress will repeal the Agricultural Produce Market Committee Act and make trade in agricultural produce — including exports and inter-state trade — free from all restrictions”. And further: “We will establish farmers’ markets with adequate infrastructure and support in large villages and small towns to enable the farmer to bring his/her produce and freely market the same” (points 11 and 12 of the manifesto under the section on ‘Agriculture’). I fail to understand how this is different from what the three bills are about? I don’t have any political affiliation, but all my professional life has been spent in analysing agri-policies; I have found how farmers in India have been implicitly taxed through restrictive trade and marketing policies. This is so much in contrast with China and other OECD countries that heavily subsidise their agriculture (see graph). So, the freedom to sell is the beginning towards correcting this massive distortion and that’s why I welcome this move.

But the Opposition has now changed the goal post. It is asking MSP to be made legal, implying that all private players buying below this price could be jailed. That will spell disaster in the markets, and private players will shun buying. The government does not have the wherewithal to buy all the 23 commodities for which MSP is announced. Even for wheat and paddy, it cannot assure MSP throughout India. The reality, as the 70th round of NSSO on Key Indicators of Situal Agricultural Households in India shows that only six per cent of farmers gain from MSPs. Roughly the same percentage of value of agri-produce is sold at MSPs. The rest of the farming community (94 per cent) faces imperfect markets. It is time to “get agri-markets right”. These farm bills are steps in that direction.

Some states fear losing revenue from mandi fees and cess. The Centre can promise them some compensation, for say 3-5 years, subject to reforms in APMC markets. Arhtias are smart. They can take on new roles of aggregation for the private sector.

The writer is Infosys Chair Professor for Agriculture at ICRIER