Piyush Goyal writes: The India pavilion at Expo 2020 Dubai will showcase opportunities for those ready to participate in the economic journey of a resurgent nation. 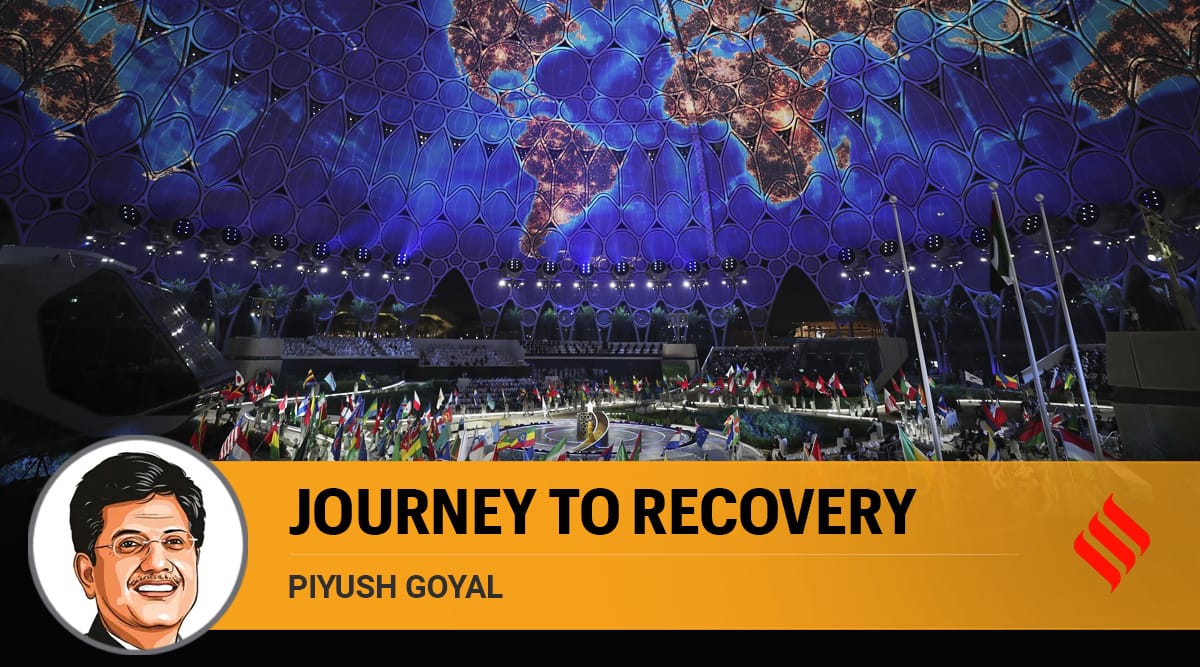 As we pay tribute to the Father of the Nation, Mahatma Gandhi, on October 2, the India of his dream with an all-inclusive growth paradigm, swachhta, and swaraj is clearly visible on the horizon. Twenty years of selfless and relentless efforts by Prime Minister Narendra Modi as a leader of people at the highest level, first as Chief Minister of Gujarat and then as the Prime Minister, have been the mainstay of the government’s mission to ensure real swaraj for all, especially the poor and needy. The pandemic has strengthened our resolve.

Adversity brings out the nation’s real character in taking challenges in its stride, strengthening its capabilities and charting a path to attain ambitious goals. India’s exceptional fightback against Covid-19 is an example of converting adversity into opportunity. While the entire world has been on the defensive during the pandemic, Prime Minister Narendra Modi’s vision has been to usher in reforms and prepare India for a sustained phase of higher growth.

The reforms that we have undertaken in the last seven years, especially those initiated during the pandemic, are set to boost the country’s manufacturing and exports potential and make India a global economic hub. They will also strengthen India’s capabilities in the technology space. India is already a leading player in the global IT markets and the pharma and space technology sectors. The development of the country’s research and innovation capabilities in these fields would help India reap the benefits of new-age technologies like artificial intelligence and robotics.

The lessons learnt from the pandemic have also increased our confidence to overcome any challenge with the help of our scientific, entrepreneurial and R&D capabilities. Whether it is the development of pharma and healthcare products or running the world’s biggest vaccination programme that banks on two vaccines produced in the country, India has set global benchmarks.

From here on, quality and productivity will play a big role in achieving and sustaining a phase of high economic growth that India has already embarked upon. Leaving behind the impact of Covid-19, India’s economy grew by a record 20.1 per cent in the first quarter of the current fiscal year as against the contraction of 24.4 per cent in the same quarter last fiscal year. This not only signals a strong revival but also the potential for an economic rebound in a big way. We have a huge advantage in our young population. With the country’s New Education Policy focusing on skill development, the productivity levels in the country are set to rise substantially to support India’s growth objectives.

Coinciding with this important period in India’s growth journey and symbolising the great recovery of the world from Covid-19, the World Expo 2020 at Dubai marks the largest coming together of the global community. The Expo that began on October 1 will continue till March 31.

The India Pavilion at Expo 2020 Dubai will showcase the country’s rich cultural heritage, its prowess and vibrancy and the opportunities offered by the resurgent “New India” to the world. The country’s sustainability objectives and opportunities will be in full display at the pavilion presented by the Central government ministries and departments, states and industry. India’s participation in Expo 2020 will also deepen our relationship with the UAE.

Riding high on reforms in a variety of realms, including the Goods and Services Tax (GST), Real Estate Regulatory Authority (RERA), labour laws, industry-friendly FDI policies and the Productivity Linked Investment Schemes — the latest of which is for the automobile and drone industries — India is fast emerging as a global economic hub. Different schemes launched by the government are raising the standards of living for the poor, needy and marginalised sections of the society. These schemes are not only empowering people but are also helping the government include every nook and corner of the country in its growth journey.

Schemes such as the Ujjwala Yojana and the Pradhan Mantri Garib Kalyan Ann Yojyna are targeted at the poor and the marginalised sections. The government is striving to ensure that the benefits of its projects reach the people at the bottom of the pyramid. It is no mean feat that the government could ensure that no family had to sleep empty-stomach at the peak of the pandemic.

India is on the path to sustain a GDP growth that will take the country towards a $5-trillion economy, and beyond. The next 25 years will showcase India’s golden growth phase. From the Expo 2020 platform at Dubai, we will invite the global community to participate in the journey of this resurgent “New India”.

Let us all be part of the India of Mahatma Gandhi’s Dream.

This column first appeared in the print edition on October 2, 2021 under the title ‘Journey to recovery’. The writer is Minister of Commerce & Industry, Consumer Affairs, Food & Public Distribution and Textiles, Government of India