Elections are less free and fair 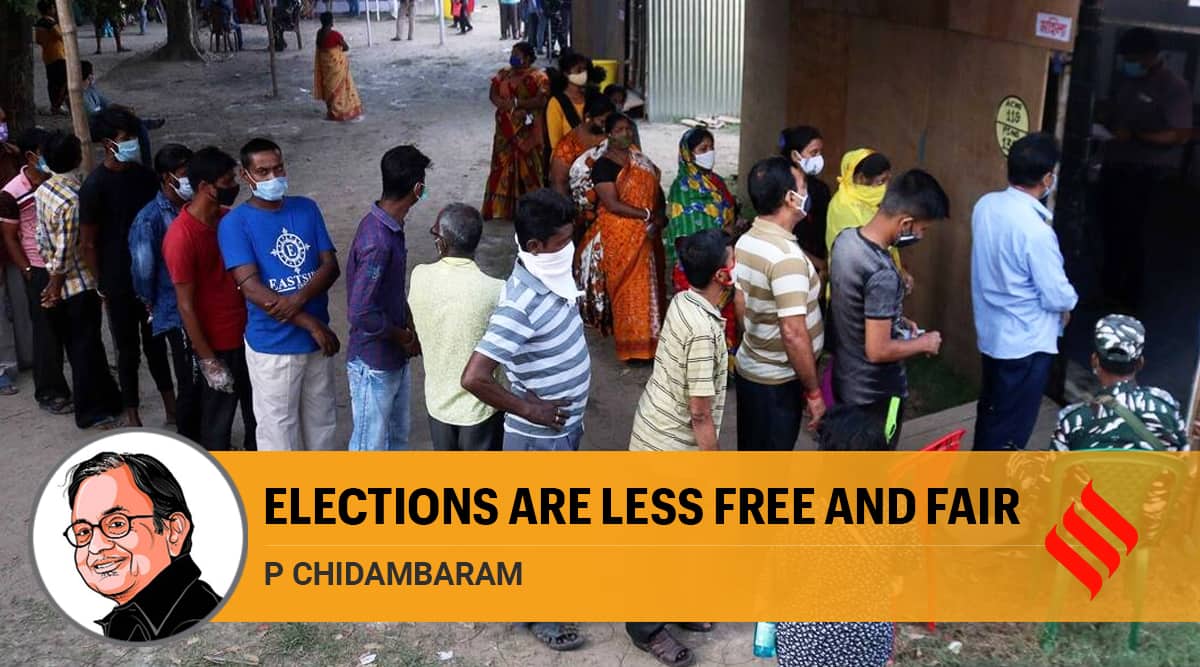 When I first campaigned in an election in 1977, the situation was not ugly. There were some undesirable things in that election but not the ugly things that we see today.

Year: 1977. State: Tamil Nadu. Indira Gandhi had called an election, freed the leaders detained during the Emergency, and faced a resurgent Opposition. M G Ramachandran had broken away from the DMK in 1972, formed his own party (AIADMK), won a crucial Lok Sabha by-election, and was riding an unprecedented wave of popularity and adulation. The Congress (I) had joined hands with the AIADMK and faced the DMK that was in the forefront of opposing the Emergency. Surprising most people, the anti-Emergency wave that swept across the northern states could not cross the Vindhyas.

That election was a decent, fair and free election. The Election Commission (EC) was fiercely independent: for instance, it acknowledged the logic of allotting a common symbol to all the candidates of the AIADMK (though it was not a recognised party and had won only one by-election). Candidates spent money on vehicles for campaigning, posters, leaflets, meetings — and on nothing else. It was truly campaign and canvassing for votes. There were not even rumours of bribing voters.

The ugly side was the elections were determined by the dominant castes, usually the land-owning class. The very poor, the Dalits and the tribals had little choice but to vote according to the wishes of the dominant castes and the landlords. The minorities were silent — but not afraid — and voted as directed by the leaders of their communities. Legally, it was a free election, but not as free as it should be in a true democracy.

Fast forward to 2021. Elections are certainly more democratic in the sense that no section of the people fears any other section. Caste plays a key role, but not as much as in the past. Class is largely irrelevant: the poor do not fear the rich, and vote freely.

The new ugliness are money and the widely-shared perception that the EC is no longer truly independent. Both are body blows to democracy. For example, in Tamil Nadu, the EC has not been able to stop the distribution of money. Money is offered to — and accepted by — practically every voter.

Humongous sums of money are spent on every rally of the Prime Minister and the Home Minister. A giant stage is erected, LED screens are installed, hundreds of vehicles are hired to bring people to the rally, and money and food are given to them. Crores of rupees are spent on advertising, on social media outlets, on short messages, on telephone calls and on paid news (popularly called ‘packages’!). No one denies that crores of rupees are spent by political parties, but it is not reflected on the expenditure side or receipt side of either the parties or the candidates.

Old-style campaigning and canvassing for votes are out. I wonder if they will ever return. An election is no longer a festival of democracy but a staged event.

The other distressing feature is the suspected bias of the EC. I will commend the work and the honesty of the presiding officers in the polling stations, the technicians who maintain the EVMs and VVPATs, and the counting officers on counting day. However, I have serious reservations about the general superintendence and control exercised by the EC.

Mr A Raja of the DMK was banned from campaigning for 48 hours for an ill-thought and derogatory remark but, in the case of Mr Himanta Biswa Sarma of the BJP who had made an equally derogatory remark, the initial ban of 48 hours was scaled down to 24 hours. Why?

Every speech of Ms Mamata Banerjee was seized upon to warn her, to issue notices to her, and finally to ban her from campaigning for 24 hours. Did the EC find nothing wrong in the speeches of the Prime Minister and the Home Minister? What about the PM’s remark that if the minorities are exhorted not to split their votes, the majority should consider what they should do in such a situation? What about the street-level, cat-call like jibe of ‘Didi-o-Didi’? Is that the manner in which a prime minister should refer to a chief minister? I cannot imagine a Jawaharlal Nehru or a Morarji Desai or a Vajpayee speaking that language.

The most egregious action of the EC was spreading the election calendar in West Bengal over eight phases and 33 days. Tamil Nadu, Kerala and Puducherry have, together, 404 seats and elections could be held on one day, April 6. Why does West Bengal with 294 seats require eight days? The suspicion is that it was done to enable the Prime Minister and the Home Minister to campaign on more days in West Bengal.

What the EC needs is a T N Seshan. He was described as a bull dog, but he was a bull dog that did not fear or oblige his master. I would still give the benefit of doubt to the EC, but we will watch their conduct between now and May 2.