🔴 Ravi Srivastava writes: It needs to be followed by restructuring social security and social protection programmes, and simplifying them Any blueprint for universal social protection will have to further consider financing requirements and allocation of adequate funds. (C R Sasikumar)

As per the second quarter GDP estimate, the Indian economy is nearing its pre-pandemic level which is undoubtedly comforting news. But this has to be tempered by the fact that the recovery is far from complete for informal workers, including circular migrants, who form the vast majority of the workforce. Their deep-seated vulnerability was thoroughly exposed by the pandemic, and is closely linked to the vulnerability of the growth process marked by incomplete recovery of private consumption and investment.

Data from all major sources show that employment is yet to recover. The complete panel results from CMIE show that the employment-population ratio for the period May-August 21 was 36.8 per cent compared to 39.6 per cent in the same period two years ago and the unemployment rate for both rural and urban areas is still considerably higher. The consumer sentiment survey by CMIE also shows that most households perceived their current incomes as lower than their incomes two years ago. Persistent hunger and poverty underlie the low incomes and consumption. Further, greater health and educational deprivation threatens to increase the ever-growing chasm between the rich and the poor, even for future generations.

This calls not only for emergency short-term measures but also more effective long-term policies. Instituting universal social protection, as enshrined in the Constitution and in global human rights compacts, should be an important pillar of this strategy. Detailed empirical analysis supported by the ILO and UN also indicates that this is a prerequisite for equitable and sustainable growth through its mildly redistributive demand-boosting impact.

The emergency requirements dictated by the pandemic led the Supreme Court, in May 2021, to order a time-bound inclusive and universal registration system for informal workers and circular migrants. The e-Shram portal which has come into existence now is meant to fulfil this mandatory requirement, although registration had been recommended by the National Commission for Enterprises in the Unorganised Sector (NCEUS), and was already mandated by the Unorganised Workers’ Social Security Act more than a dozen years ago. The portal has by now registered more than 120 million workers, 61 per cent from just four states — Uttar Pradesh, West Bengal, Bihar and Odisha. It also captures the migration status of workers albeit with very scanty information.

The pace of registration has raised expectations regarding universal social protection and social security coverage among these workers. In a speech on December 10, the Union Minister of Labour has also reiterated his government’s commitment towards this objective. But this will involve a move from a patchwork of existing schemes towards creating specific statutory entitlements for social security as envisaged in the Code for Social Security, as well as the creation of a well-designed and adequately funded social protection floor for all workers and families.

So far, however, workers registered in the portal will only be entitled to a pre-existing accident insurance policy that carries a tiny premium. Beyond this, no expansion of social security/protection presently appears to be on the cards. The e-Shram portal merely lists 13 existing social security and social protection schemes and six other employment generation schemes for which sections of workers could be eligible.

Two major existing programmes in the above list which differ from the others as they are already covered by central legislations are those aimed at food security and rural employment — MGNREGA and the National Food Security Act (NFSA). The latter has the widest coverage among social protection programmes. Despite cynicism in certain circles, both within and outside government, these two programmes have formed the major bulwark against joblessness and hunger in the pandemic period.

All other schemes are non-statutory and carry differing eligibility criteria, some drawn from the Socio-economic Caste Census carried out in 2011, others related to poverty status, age etc. These criteria are far more demanding, and often quite different from the information, based on self-declaration, which is required for worker’s registration on the portal. The schemes require to be clubbed, and restructured with simpler eligibility criteria to make them universal and entitlement-based for all informal workers through statutes, rather than being left to political exigencies and whims of governments.

Any blueprint for universal social protection will have to further consider financing requirements and allocation of adequate funds. The Code on Social Security does not propose any fresh funding mechanism other than for gig and platform workers. The expansion of social security/protection has been languishing in India mainly because of a lack of commitment towards higher funding. However, except in the crisis year 2020-21, expenditure by the central government on all major social security/protection programmes has shown a declining trend — from about 1.64 per cent of GDP in 2015-16 to 1.25 per cent of GDP in 2019-20.

Finally, there is the important issue of the role of the states in extending and universalising social protection. States in India have played a pivotal role in innovating and extending social protection. However, in the new scheme of things, their role remains unclear. The Code on Social Security restricts the scope of state schemes to a very few insignificant areas. Several states had also developed registration mechanisms for delivering programmes that are difficult to synchronise with the new national registration mechanism. Considerable thought has to be given as to how the new design will accommodate the role of the states.

It is worth reiterating that universal rights-based social protection will not only alleviate unwanted distress but also lead to equitable and sustainable growth. The new Code on Social Security, despite several limitations, incorporates a legal framework for universal social security of informal workers and the government has also accepted the need for universal social protection. The e-Shram registration mechanism can be seen as a small stepping stone towards these goals, provided further steps are taken. These include restructuring social security and social protection programmes on a statutory basis and simplifying them to promote universalisation. This will also require that states and all relevant stakeholders are involved at all stages of the process. Most of all, the central government has to be prepared to prioritise expenditure on social protection. This will only begin to happen once the mindset that views expenditure on the poor as a dole, rather than as an investment, undergoes a change.

This column first appeared in the print edition on December 23, 2021 under the title ‘Weaving a safety net’. The writer is Director, Centre of Employment Studies, Institute for Human Development, and a former member of the NCEUS

Electoral reform is welcome, but shouldn’t be selective 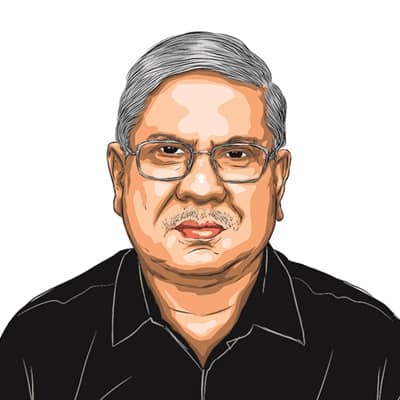