Drained of all sense

Now that the election is almost over,I must admit I am a bit of a fanatic. Not a big one,but a small one.

Now that the election is almost over,I must admit I am a bit of a fanatic. Not a big one,but a small one. I follow the tyranny of reason. But reason is bound by the prevalent state of knowledge. The lady of the house is not too happy at my raising three-eighths of an eyebrow at alternative medicine and was mightily pleased at scoring a point when a new e-based toy was introduced which uses mind power to move things. Now on rivers,I believe I was largely right. I was very unhappy when the mighty Narmada was to be dammed with crude principles and bad data. So we modelled ten daily flows in four reservoirs and modelled groundwater aquifers. One of the modellers is now the director of an IIM. I was able to get the project the dhobi mark of my boss the late Rajiv Gandhi,a techie if ever there was one,who just couldnt resist the lure of computerised answers to the critics of the project,so the Excel sheets would be his on any date he wanted to lambast his underlings,namely us. Readings on the water levels of a hundred piezzometers in the Mahi Narmada Doab ten days earlier? That too.

The small (fanatic) mistake lay in the details,in which the devil resides. The mistake was not what the activists said. (They were all wet. If your hydrology is good and your aquifer modelling is good,which this was,you could make mincemeat of their quibbling. It doesnt matter for they dont look at reason,but that is another argument. Any reasonable person would be convinced.) The problem lay elsewhere. The modelling was so good that we very accurately used up all the water for the crops,the trees and for drinking. We all forgot the obvious. Rivers also need water.

In the 90s doubts set in. Sunderlal Bahuguna raised the scare that there would not be any Ganga when all the Tehri work was over. He tended to go on fasts. I had done it once,when I was Vice Chancellor of JNU,but even I felt he was overdoing it,though I wouldnt tell him. It was almost a routine: he would go on fast; I would land up in a sarkari helicopter; the newspapers would be full of stories of Bahuguna Gently Chiding Alagh. We would set up an honest mechanism to examine his latest argument and move on,much to the chagrin of the accompanying ministry officials who knew that another ten crores would go down the tube in more studies. But the accusation that there would be no Ganga bothered me. The more I thought of the reply to that one the more the possibility was there that he could be right. A university teacher is trained to look for that bright student who asks the question to which there is no convincing answer.

Many years earlier the Gandhian Chunni Vaidya,Chunni Kaka as we called him,had raised the issue that in the Sipu,a part of the Sabarmati basin,water rights of the villagers were transgressed by an upstream dam. The best engineers couldnt answer him. This was also personal. As a very young director of the Sardar Patel Institute every evening,I would take off time and take my wife and little daughter to Nehru bridge and watch the Sabarmati flow,a great pleasure of our life. When we went for my first job to Delhi my father stopped the car on the bridge,threw a coin,and prayed that the Sabarmati would call him back. He didnt make it but when I came back,there was a dam upstream and the river was gone,apart from in the monsoon. Then I was to learn that like the Sabarmati at Ahmedabad,the Khan at Indore and many others,rivers had disappeared. Every engineer knows that when you arrange water supply you also arrange drainage. We dont have the money for that,so many of our rivers,a fading part of our cultural memories,become drains.

In the 90s we set up a commission on our water futures. My friend Syed Raza Hashim did his usual meticulous job,but the government changed and the commission was put in wraps,for our politicos and babus have scant regard for meticulous work on a national problem where they know all the answers. Years later it was put on the internet as an unknown document. The commission introduced an interesting idea,which had always bothered me and that is they planned for what they called environmental flows. In short,rivers also need flowing water. They allocated a notional ten per cent of water demand for this. This is now up for the grabs. One of our sounders,senior engineer Mohile has an estimate which is much less than a young lady from JNU who gets my sympathy for thinking out of the box on this one. But it is early hours and there are other studies. The next government needs to firm all this up and make it the agenda. The last one started well by saying that the Ken Betwa was a project that needed examination and set up a committee to do that but soon gave in to a loud lobby and allowed a terrible project to be signed. Coalitions are subject to small unreasonable minorities which exercise pressure,but if a minority exercises pressure on a good thing they should also crumble. So lets do it.

GNLU,PDPU plan to start a course on energy laws 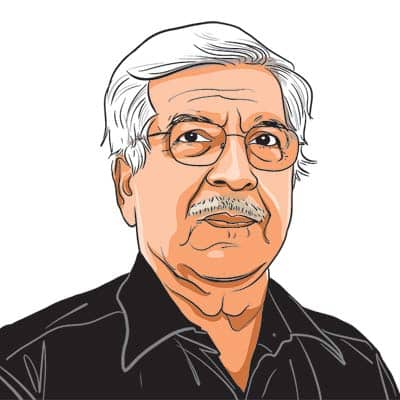