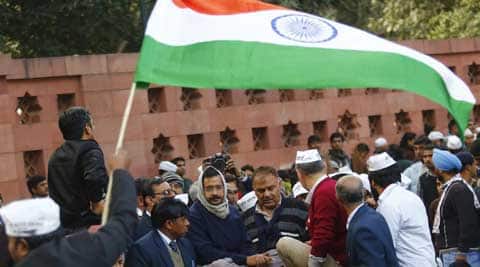 Delhi chief minister Arvind Kejriwal and his supporters launched a sit-in against the city police on Monday, creating traffic chaos and a standoff. (Reuters)

As Delhi Chief Minister Arvind Kejriwal called off his dharna, analysts and party spokespersons stepped in to pronounce judgement. If some called it a victory for the Aam Aadmi Party, others called it a sellout. Some spoke of the climbdown by the Delhi government; others welcomed the end to anarchy. Had the chief minister and his team given up too quickly? Had their demands been met fully? As the stock-taking began, what was forgotten is that success in a democracy rests upon the ability of the leaders to balance different values satisfactorily. They must pursue their agenda without forsaking other, equally desired values that may be foregrounded by the opposition.

Not all actions and decisions of the AAP can be defended; one might also accuse the AAP of not being adequately true to Gandhian principles. But that hardly makes them anarchists. The methods the party has chosen may be unusual, but common wisdom and traditional modes of action hardly find favour with the liberal disposition.

Anarchists, we know, have little faith in existing institutions — be it the family, the corporation or the state. They resist all forms of institutions on the ground that they are a form of organised power. The Delhi government’s expressed objective is to change the structure of power. Far from being disillusioned with the institutionalised form, the AAP hopes to change the way institutions of the state and government function.

The test before Kejriwal and his men was whether they could achieve accountability of institutions (in this instance, the police) without jettisoning law and order. Could they have their voice counted without undermining the national pride associated with Republic Day celebrations? Could they make their voices heard while minimising the inconvenience caused to the general public by their actions? Had they pursued one goal unconditionally and absolutely, they and Indian democracy would have lost out. Determining success in terms of the number of demands met simply misses this point, just as labelling the Central government’s decision to accede to some of the AAP’s demands as selling out overlooks the fact that willingness to negotiate is an essential component of democratic politics.
Democracies need men with practical wisdom at the helm of affairs: leaders who know what to pursue when and how; leaders who can choose the moment to launch a struggle, and the moment to withdraw. One could debate whether the suspension and transfer of a few public officials is sufficient cause, or whether compelling the authorities to take cognisance of the legitimate complaints of the Delhi government is a step forward for the AAP. But what is clear is that this dharna has put the spotlight on the space for dissent in democracies.

Liberal democracies give their citizens not only the right to express their views but also the right to protest and express dissent against prevailing procedures and laws, so long as they do not rely on violence or coercion. It is this space available within democracies that the Delhi chief minister chose to exploit. This is why, despite being dubbed as anarchists by critics, the label did not stick.

However, the decision to stage a sit-in still raised many issues. Was this form of dissent permitted? Should members of the government focus on governance instead of protesting in the streets? Most critics of the Delhi government expressed the Socratic wisdom that law is the most important pillar of society. Hence it must be adhered to under all circumstances. The fear that protests may turn violent or that the leadership may lose control over them has won this view many supporters.

The anxieties about democracies sliding into mobocracy or complete chaos are real. Ordinarily, change must be brought about through procedure rather than protest on the street. Yet, when institutions fail to function in accordance with law, what options are available to citizens? In the face of this reality, protests that seek to hold officials and institutions accountable remain an integral part of democratic life. Even contemporary liberals accept that putting pressure on the authorities to act in a manner that conforms to constitutional norms and laws is the political and moral duty of every citizen.

In India, it is Mahatma Gandhi who gave a more strident expression to this sentiment when he called upon the people to listen to their conscience and refuse to accept what is unjust and morally unacceptable. He asked those joining him in non-cooperation and civil disobedience to resist unjust laws, but be willing to suffer the consequences of their actions. Rule of law deserved respect and hence, one must be willing to accept punishment for breaking the law. But one’s moral obligations to pursue what is just and fair trumped the respect that is owed to law.

For Gandhi, this was a way of bringing law in harmony with the moral. The tension between the moral and the legal was pronounced under colonial rule but it can, and does, surface in other circumstances too. If institutions stagnate and become irresponsible and unaccountable to the values enshrined in the Constitution, or if they position themselves against common citizens, then it may be one’s duty to infuse the legal with the morally just. If self-critique and change could be ushered in through reasoned argument, then all forms of action outside the domain of constitutionally mandated institutions would be, as B.R. Ambedkar suggested, unnecessary. But when reason fails to deliver and the quest for power and interests comes to dominate, maintaining the stability of even a just constitution may require stronger action, including protests against institutionalised authority.

This must, however, be the exception rather than the norm: something that responsible citizens undertake in the last and not first instance. That would make a difference between a legitimate democratic struggle and anarchism.