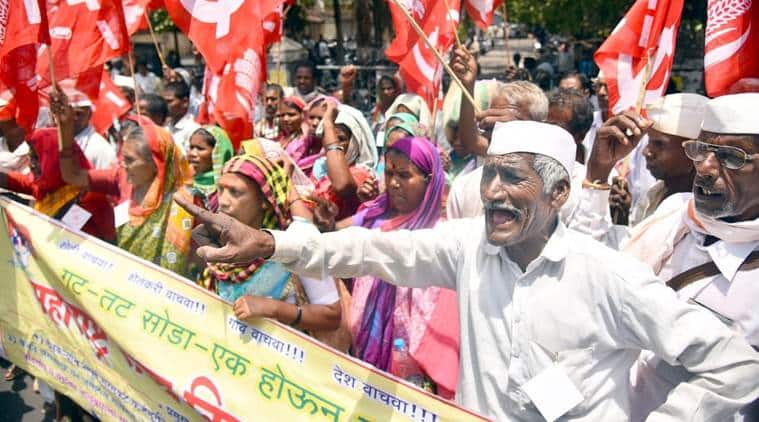 It is not clear who is in charge or what policy changes will be made. The Cabinet is a mute spectator. The PM’s Economic Advisory Council has disappeared without a trace. I wonder how long will the government hide behind a number and a slogan. (Photo: PTI)

How much can you hide behind one number? A lot, if the media played ball.

The government puffed up the Q4 growth rate and claimed that the worst effects of demonetisation and a flawed GST were over. Mercifully, the government stopped short of making the claim that achhe din had arrived. At the end of four years, the government has switched over to a modest Saaf Niyat, Sahi Vikas (Clean intention, right progress)! The path of the BJP-led NDA government’s four-year journey is littered with too many broken promises: Rs 15 lakh in every bank account, 2 crore jobs, MSP at cost + 50 per cent, waiver of agricultural loans, insurance cover to all farmers, peace and security in Jammu and Kashmir, a good and simple GST, and many more. You can add to the list from your own experience.

At the end of four of the five years allowed to a government, the people cannot be expected to judge a government by its intent. The correct test is outcomes. Look at the boxes with the graphs. Every line depicts a measurable parameter. And every line, after showing promise in the first year, has dipped.

Other lines in the two boxes also tell the miserable story:

Credit growth dipped drastically from 13.8 per cent to 5.4 per cent before recovering somewhat in 2017-18. Within credit growth, it is credit to industry that is important. In the last four years, annual credit growth rates to industry were 5.6, 2.7, -1.9 and 0.7 per cent.

The index of industrial production (IIP) has remained flat. That number demolishes the claims on behalf of the much-touted Make in India programme. Besides, as far as defence production is concerned, the Make in India model was officially abandoned a few days ago (see Business Standard, June 6, 2018).

Gross NPAs have risen from Rs 2,63,015 crore to Rs 10,30,000 crore and will rise more. The banking system is practically bankrupt. I have not come across a banker who will willingly sanction a loan; nor an investor who will confidently borrow money. The economy is running on just one wheel — government expenditure. 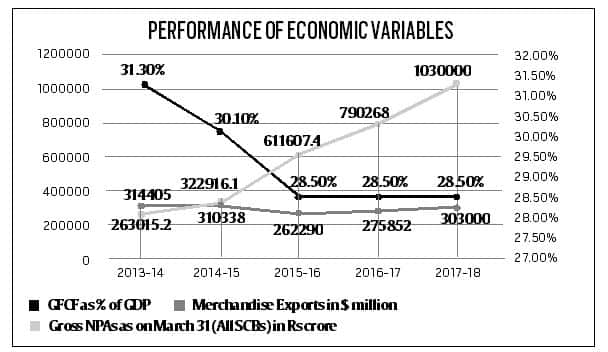 Merchandise exports hit a peak of USD 315 billion in 2013-14. Since then, the figure has struggled to cross USD 300 billion and, in two out of the four years, it was well below the peak.

We could pick up more economic indicators and draw the lines on a graph. It will be the same story of poor analysis and reckless decisions (demonetisation, flawed GST, stagnant farm wages, high fuel prices, intimidating tax recovery, mala fide investigations etc).

It is not clear who is in charge or what policy changes will be made. The Cabinet is a mute spectator. The PM’s Economic Advisory Council has disappeared without a trace. I wonder how long will the government hide behind a number and a slogan.