Coup is a setback to Myanmar’s unique experiment with democracy

Given India’s position in the region and its history of supporting democratic traditions, Delhi is likely to exert pressure for the restoration of democracy. 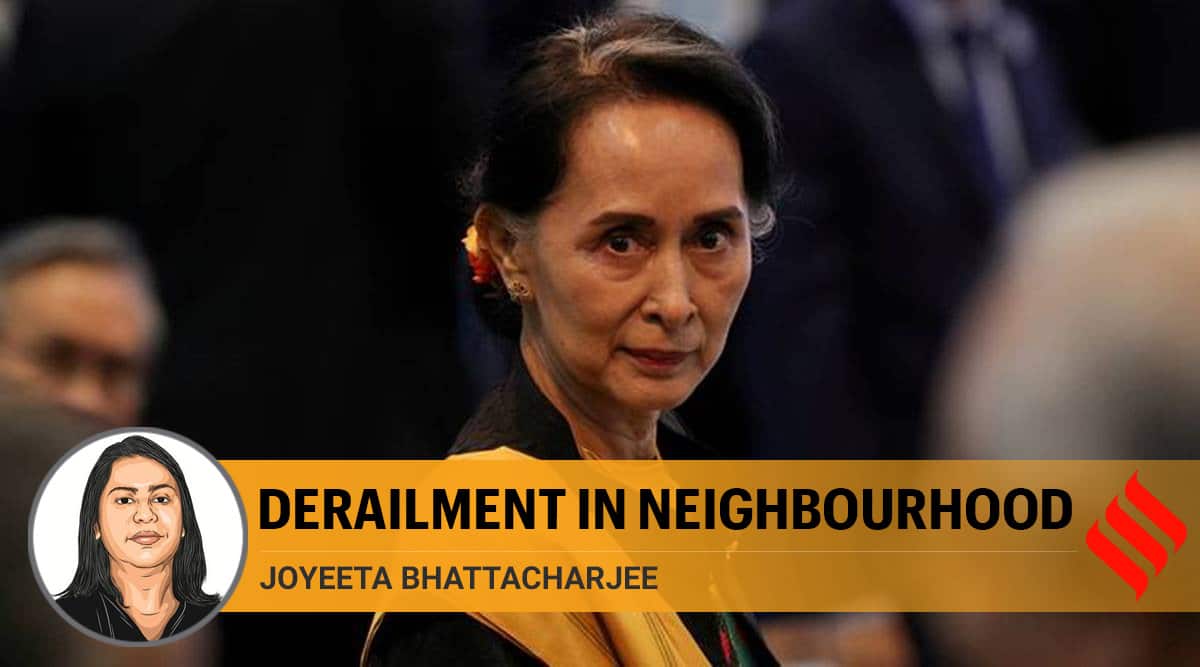 Despite her bitterness with the army, Aung San Suu Kyi seemed to have been navigating the country’s brand of democracy well, giving rise to the popular belief that democracy was gaining deeper roots in Myanmar.

Democracy has once again been trampled upon in Myanmar. The country’s future appears uncertain because of the military takeover and arrest of Aung San Suu Kyi, the de facto head of Myanmar’s elected government and leader of the National League of Democracy (NLD). The party had won a landslide majority in the election held in November 2020. Soon after the coup in the early hours of February 1, a year-long state of emergency was declared. This is actually not a sudden development — whispers about the possibility of the military toppling Myanmar’s democratically elected government were floating for the past few days.

While the reason cited for the military takeover was the government’s failure to act on the army’s complaint about frauds in the November election, the actual reasons, according to several observers, are different. Suu Kyi’s NLD had won a total of 390 seats while the main Opposition, the military-backed Union Solidarity and Development Party, managed only 33 seats. That led to concerns within the military about their powers being curtailed by a more popular political leader. The top military commander, Senior General Ming Aung Hlaing, was slated to retire in July and there were clear indications that he did not want power to go out of his hands.

The Myanmar army has a long history of meddling in the country’s politics, beginning with the coup in 1962, in which the democratically elected government of the Prime Minister U Nu was overthrown. The army’s political ambition has been a hindrance in the path of democracy in Myanmar. In 1990, despite the NLD’s decisive victory in the election, the party was prevented from forming the government because the military rejected the result. Suu Kyi was under house arrest for close to two decades. In 2010, Myanmar ventured into a unique experiment in democracy largely initiated by the army. The military ensured its control over power by reserving seats in the country’s parliament. Myanmar’s unique form of democratic experiment, however, has been fairly successful, allowing the NLD to form a government after the general election in 2015. Despite her bitterness with the army, Suu Kyi seemed to have been navigating the country’s brand of democracy well, giving rise to the popular belief that democracy was gaining deeper roots in Myanmar. The coup is a step back for Myanmar.

The influence of China cannot be overlooked. The Chinese communist party and military leadership have had a very close association with the Myanmar army for decades now and it’s believed that the army wouldn’t have taken such a step without consulting Beijing. Although Suu Kyi had maintained friendly relations with China, a democratic government would have curtailed Beijing’s capacity to manoeuvre in the long run, especially because China’s popularity in Myanmar has increasingly been on the ebb.

The community most likely to be affected by the current uncertainty is the Rohingya refugees. Predominantly Muslim, Rohingyas are inhabitants of Myanmar’s Rakhine province bordering Bangladesh. A million of them are living in Bangladesh as refugees due to persecution in Myanmar, and waiting to be repatriated. Recently, Bangladesh and Myanmar held a virtual dialogue for the repatriation of these refugees, despite reservations of the Myanmar army. These efforts, supported by the global community, will definitely be impacted by the current coup.

The coup has led to international concerns and India has also made its disappointment known and urged for upholding the rule of law and democratic processes. Given India’s position in the region and its history of supporting democratic traditions, Delhi is likely to exert pressure for the restoration of democracy. The China factor will also be very crucial to watch in the next few weeks and is likely to be crucial to Delhi’s strategy in the region. India will definitely be guided by the interests of the people of Myanmar. Strong and prompt statements from the US and Australia have also come out against this derailment of democracy. Concerted global pressure must be applied on the Myanmar military to restore democracy.

This article first appeared in the print edition on February 3, 2021 under the title ‘Derailment in neighbourhood’. The writer is a Senior Fellow with the Observer Research Foundation. Views are personal

Advertisement
Editorial |The backsliding: Army seizes power, turning clock back in Myanmar. India must leverage its influence to persuade it to step back
© The Indian Express (P) Ltd
First published on: 03-02-2021 at 03:02 IST
Next Story