Pakistans Supreme Court last week gave a short order on a 16-year-old petition from 1996 by Air Marshal (retd) Asghar Khan challenging the armys intervention in the 1990 elections. The then army chief,Mirza Aslam Beg,and his chief of the Inter-Services Intelligence (ISI),Lt Gen (retd) Asad Durrani,were accused of bribing a number of politicians to influence the elections.

Many in Pakistan view the decision as another watershed judgment that will block any future military intervention in politics. The superior court was of the opinion that the army,its intelligence agencies and presidency should abstain from interfering with peoples freedom and fundamental right to elect their representatives. The army and ISI had colluded with then President Ishaq Khan to ensure Benazir Bhutto didnt get elected. Thus,in a short order,the SC held Beg and Durrani responsible for rigging the 1990 elections and ordered the Federal Investigation Agency (FIA) to investigate the culprits,including the politicians who took bribes,and the government to recover the money.

The question is,where does Pakistan stand today due to this decision? Will this ensure the militarys accountability and discourage it from forcibly taking over the state?

The court has also instructed the ISI and military intelligence not to have any political cells that are used to manipulate politics. However,the army has claimed through the defence secretary,who is a retired army general,that it closed down the political cell five years ago. The question is,how does one trust this statement,given that a political cell was never part of the ISI or the armys structure,and there is no guarantee that it was closed down or will not reappear in the future? For instance,the former ISI chief Lt Gen (retd) Ahmed Shuja Pashas alleged support for Imran Khans party was also an intervention that may have happened with or without a full-fledged political cell  that is,if we are to believe the claim that such a cell has not existed for the past five years.

How strong a signal this decision sends to the army depends on its eventual outcome. The court has given no clear direction except for directing the FIA to hold an investigation. This is probably due to the fact that the judges were too fixated on curbing President Asif Ali Zardaris political role than focusing on the key subject of harnessing the army. Further,issues remain unresolved due to doubts about the FIAs capability and integrity to conduct the investigation. While Shahbaz Sharif (Nawaz Sharifs brother) has objected to the FIA holding an inquiry,Imran Khan has also shown concern about the integrity of the investigating agency,despite the fact that he may be a possible beneficiary of the Sharifs being ousted from the business of politics as the result of such an investigation. This is not due to genuine sympathy for the Sharifs,but concern for the two military men. Beg and Durrani. Interestingly,even the higher judiciary had expressed its doubts about the FIA in the past. The SC and its justices certainly did not show any faith in the FIA or the other anti-fraud agency,the National Accountability Bureau,whose chief is also appointed by the president,to inquire into the allegedly corrupt dealings of the chief justices son.

The reputation of the FIA,whose head was changed several times in the last couple of years and which comes directly under the authority of Interior Minister Rehman Malik,raises doubts in the minds of many regarding the reliability of any future investigation. There are several possibilities as far as an investigation is concerned. It could get bogged down due to the hue and cry raised regarding the FIAs credibility and the governments intent,thus delaying any action against the politicians or military men. Or,a debate will be orchestrated about the political leadership,which will eventually destroy some of them publicly and safely divert attention from the former army and ISI chiefs.

In any case,it is worth noting that despite the long hearings,all the SC did was to accuse individuals,rather than trace institutional involvement in political manipulation and corruption. I remember interviewing General Beg and several other generals in 1993-94 and questioning them regarding the Mehran Bank scandal and was told that this was not the first and only time that the army had got money from private sources. The act had institutional bearings. Perhaps the higher judiciary was careful to not cross an imaginary line,after which the army could strike back. After all,the reported corruption of the chief justices son could be used as a tool to manipulate him. Malik Riaz,the key instigator of the Arsalan Iftikhar corruption case,is very close to the GHQ.

In the end,the judgment may just contribute to the existing political mayhem and confusion. If the army wants to come to direct power it probably will,irrespective of what the judges have said in this case.

The writer is an independent strategic analyst based in Islamabad

To jump or not to jump,Bolt not sure 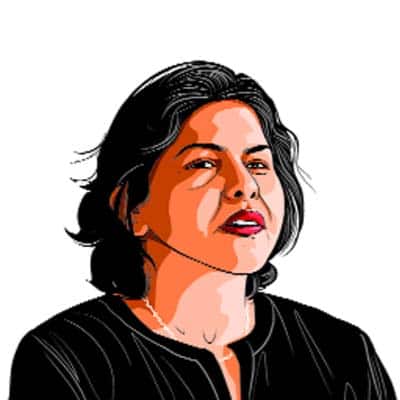