Pandemic: Beyond the economy

P Chidambaram writes: The pivot to climbing out of every hole — be it concerning the economy, education, social intercourse or festivals — is vaccination. Unless we vaccinate all the people of India, we will be on a start-stop mode that will take us nowhere. 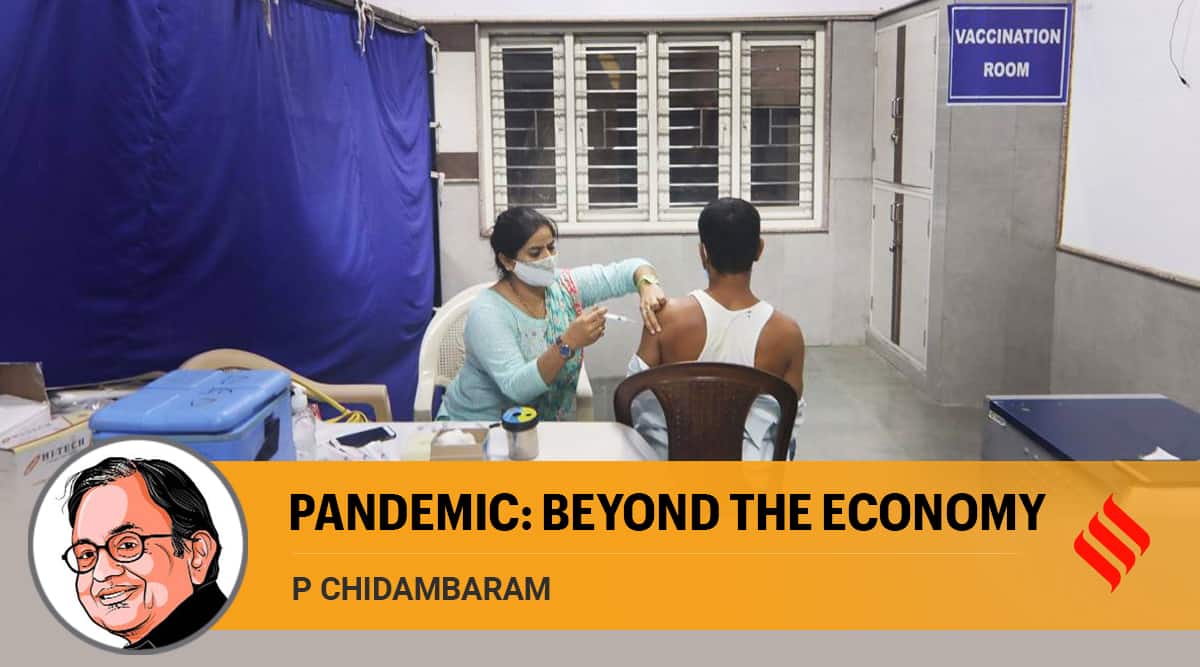 The pandemic is likely to remain with us for some more time. The healthcare infrastructure will be strained, people will be infected, lives will be lost and families will be devastated. The only defence is vaccination. India is doing worse than any of the other G-20 countries in vaccinating the adult population — only 10,81,27,846 people have received two doses of the vaccine against the target of 95-100 crore.

The consolation is, economic losses can be recovered. Closed businesses can be reopened; lost jobs can come back; reduced incomes can be restored; drawn-down savings can be rebuilt; rising debt can be pared; borrowed money can be repaid; and impaired confidence can be revived. An economy that has slid can be put back on the growth path.

Life, however, is more than physical existence. Life is living with dignity. There are many deficits that can rob a human being of dignity. Among them is incomplete school education. It is trite that a person with a school education has a better chance to a life with dignity than an unlettered person. And a person with a proper college education has an even better chance. The foundations of a good education are laid in school. Literacy and numeracy are the cornerstones.

What is the state of school education in India today? ‘Learning deficit’ is an acknowledged reality and an important measure of the state of school education. Ask what proportion of children enrolled in Class 5 can read a text prescribed for Class 2? According to the Annual Survey of School Education (ASER) 2018, the proportion was 50.3%. When the children reach Class 7, the proportion that can read a Class 2 text rose to only 73%. The enormity of the learning deficit will hit one like a sledgehammer.

Drill deeper. If we measure learning deficits by gender, urban/rural, religion, caste, economic class, parental education and occupation, and private/government school, the magnitude of the deficit grows larger as we slide down the socio-economic ladder. A child born in a village to low-education, low-income parents whose occupation is farm or casual labour, belonging to a Scheduled Caste (SC) or Scheduled Tribe (ST) or Other Backward Class (OBC), and studying in a government school, lags far behind a child enrolled in an urban, private school and supported by high-education, high-income parents belonging to one of the ‘forward’ or upwardly mobile castes.

This is a self-evident truth, now proven conclusively by ASER and similar studies.

All the above were before the pandemic hit India, and the first lockdown on March 25, 2020. On that day the schools were closed and, after 16 months, they remain closed in most states. During this period, we have witnessed the much-hyped online learning, internal assessments, automatic promotions and even grades for passing, without exams, Class 10 and Class 12. Conceding that many of these steps were inevitable, was the hype necessary?

Prof Reetika Khera of IIT-Delhi quotes a joint statement of UNESCO and UNICEF that said “schools must be the last to close and the first to reopen” and reads out the grim statistics: only 6% of rural households and 25% of urban households have computers; only 17% of rural areas and 42% of urban areas have Internet facilities; and the vast majority of families do not have smartphones. The boast about online learning in the India of 2020/2021 is a cruel joke on the children of India.

Be Judge and Jury

An average child in India starts with a learning deficit. And if she has no learning for 16 months and more, imagine how rapid will the backward slide be? The governments — Centre and states —have stood by helplessly. As a nation, we have failed our children and made no effort to find a way to mitigate the unfolding disaster.

Schools must reopen soon. Before that, the children must be vaccinated. The pivot to climbing out of every hole — be it concerning the economy, education, social intercourse or festivals — is vaccination. Unless we vaccinate all the people of India, we will be on a start-stop mode that will take us nowhere. Regrettably, the vaccination drive has not only fallen behind schedule, it is also highly inequitable. On May 17, over 500 renowned scholars, teachers and concerned citizens wrote to Prime Minister Modi on the inequalities that have emerged among the vaccinated: between urban (30.3%) and rural (13%); between men (54%) and women (46%); and between the poor states (1.75% in Bihar) and the rich (7.5% in Delhi).

The pandemic was unprecedented and can overwhelm any government. Allowing for that, the government that assumed to itself all authority under the National Disaster Management Act and took all the decisions in the last 16 months must be judged on the outcomes: did it contain the spread of the infection, did it reduce the number of deaths and did it achieve the self-declared target of fully vaccinating the adult population of India by the end of December 2021? In the meantime, did it spare a thought for the children of India? You be the judge and the jury.