Irrespective of its murky origins in China, COVID is a natural disaster. Its cost must, therefore, be met through emergency government spending and not, as is being attempted now, through soft loans that the recipients will have to repay. A Singapore study has projected that if India maintains the present lockdown till May 16, it will be 97 per cent COVID-free by May 21. But while hoping for the best, the government needs to prepare for the worst. There is a catastrophic decline in production and sales within the country; an even sharper fall in the government’s tax revenues, and a precipitous drop in foreign exchange inflows because of a simultaneous fall in export earnings and remittances from workers in the Gulf.

Having put all its eggs in the lockdown basket, the Narendra Modi government has run out of ideas. The only one floating around today — to free the economy in a phased manner and maintain the lockdown only in “COVID hotspots” — is so impractical that only someone who has never worked in the industry could have dreamed it up.

Every manufactured product contains dozens of components that are supplied by ancillary producers in the organised and unorganised sectors. The stocks of only one of these need to run out to bring the entire production line to a halt. With constantly shifting “hotspots”, can any enterprise ever be sure that it will be able to meet a committed delivery date?

There is growing evidence, first from a study by the Sun Yatsen university in China and now from the National Environment and Engineering Research Institute in Nagpur that, like its predecessors SARS and MERS, COVID could also turn out to be a seasonal virus that dies out in summer only to return in winter. If that proves correct, will the nation have to go through this trauma every winter?

There is only one way to ensure that it does not: Admitting that this is not an “internal” crisis born out of the malfunctioning of the market economy. So it cannot be overcome by tightening or relaxing credit, raising or lowering interest rates, or by putting moratoria on debt repayments.

Irrespective of its murky origins in China, COVID is a natural disaster. Its cost must, therefore, be met through emergency government spending and not, as is being attempted now, through soft loans that the recipients will have to repay.

The first step must be to create a separate emergency fund and budget for meeting the expenses that will be incurred in creating two “safety nets” — one to meet employers’ fixed costs while they are not producing anything, and the other to feed and shelter workers while they are earning nothing.

Since both the central and state governments are strapped for cash, the fund will have to be created by the Ministry of Finance through the issue of treasury bills, as a one-time exception to its 1994 agreement with the Reserve Bank of India to leave the management of money supply to it in the future.

The value of the T-Bills that will need to be issued will depend upon the loss of nominal GDP per month, how long the lockdown lasts, and the rate of saving in the economy. For instance, if the present lockdown reduces the volume of transactions by two-thirds and lasts for two months, the imputed decline of nominal GDP will be 11 per cent.

At the current savings rate of 31 per cent, any money released into the economy through the issue of T-bills will create just over 3.2 times as much income before it is fully absorbed into the economy — the Keynesian multiplier. Thus, the primary injection of funds will have to be 3.4 per cent of the annual GDP — Rs 6.8 lakh crore.

However, if the volume of transactions falls only by half, the corresponding figure for the issue of T- bills will be 5.3 lakh crore. These are double, and one-and-a-half times, respectively, the Rs 3.37 lakh crore that the RBI intends to inject into the economy as soft loans through commercial banks, but which the latter are having difficulty in finding borrowers for.

This is not a daunting sum. Much of it will be recovered if the economy makes a “V” shaped recovery. But far more valuable will be the confidence it will instill in the people that they do not need to live in fear for the rest of their lives.

The writer is a senior journalist and author

Migrant walking home to Jharkhand run over in Bengal 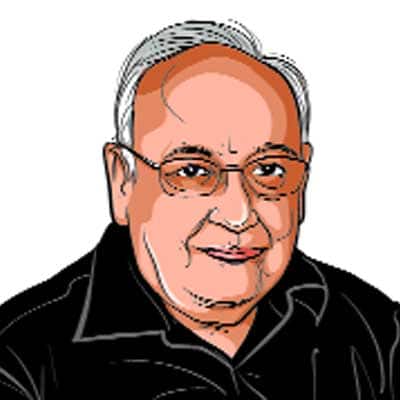