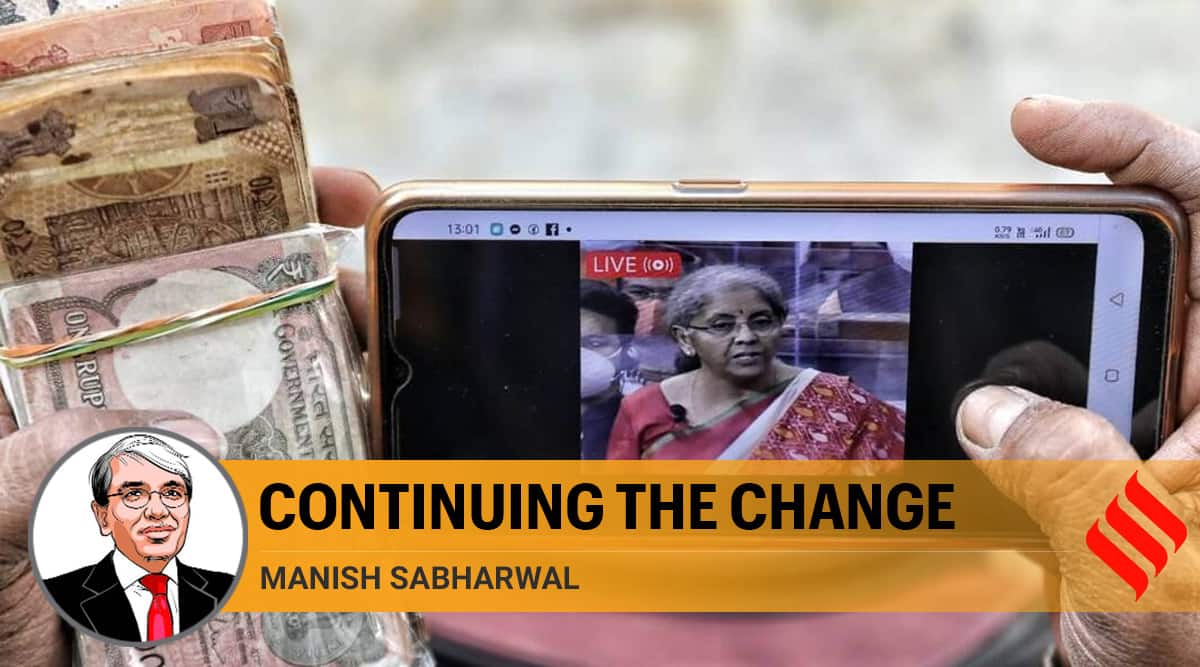 Budget 2021 was presented in the Parliament on Monday. (Express Photo by Partha Paul)

India is poor but doesn’t have to be. Changing any status quo is not like switching on a lightbulb but a gentle sunrise, not the labour of an individual but a team’s, and not a frenzied outburst of emotion but a persistent pursuit of strategy over years. Yesterday’s budget is another shrankhala (Rs 34.8 lakh crore expenditure) after a series of mini-budgets (Rs 27 lakh crore, including RBI measures) to handle the substantial difficulties for the economy and government finances created by the COVID invasion. More importantly, the budget balances the next quarter and quarter-century by continuing the structural transformation that catalyses higher productivity for India’s citizens, firms and regions and empowers them to take advantage of a global shift in economic gravity to Asia.

Math notwithstanding, a central government budget presentation is an important day to remind ourselves that if fiscal deficits could make countries rich, no country would be poor. And if monetary policy could increase the credit-to-GDP ratio (CGR), no entrepreneur would be short of capital. India’s prosperity depends on productivity and this budget had terrific interventions. Privatising two banks and one insurance company partly reverses an experiment that didn’t work out: The Lok Sabha was told on July 29, 1969, that bank nationalisation was being done to “give credit to farmers, Small and Medium Enterprises and the self-employed” but our CGR is stuck at 50 per cent and nationalised banks got over Rs 2 lakh crore in fresh public money over the last two years, though their risk-weighted assets are lower than two years ago. This privatisation could combine with the bad bank announcement, higher foreign investment limit in insurance of 74 per cent, and a new development financial institution to catalyse the raising of India’s CGR to 100 per cent. The impact of the Rs 1.75 lakh crore divestment target and the continued focus on tax reform (reduction of opening past cases to three years, faceless tribunal, etc.) are much beyond money; they signal an unleashing of lakhs of crores of public money trapped in low public sector productivity and a determination to tackle the tax corruption that sabotages India’s move from deals to rules.

The budget hinted at more reforms soon, so let’s list the unfinished agenda on jobs and skills. COVID reminded us that our social security systems need reform and we must tackle EPFO and ESI. Decriminalisation of laws and rules was mentioned but we need a 180-day compliance commission to rationalise, decriminalise and digitise our thousands of compliances and filings. We must notify reasonable rules for our four labour codes while simultaneously setting a deadline to move to one labour code. Divestment of two nationalised banks is a great start but truly accelerating the financial inclusion that explodes small firm job creation needs an independent holding company for the remaining state-owned banks. The creation of the new higher education commission needs acceleration — notwithstanding the atmanirbhar announcement of online education deregulation, only seven of India’s 1,000 universities have been licenced for online degree delivery (even though 200-plus foreign universities operate in India online). The proposed amendment to the Apprentices Act is welcome and must create space for skill universities. Degree apprentices are the future of massifying higher education because they innovate at the intersection of financing, employability, and signalling value.

Policymakers must listen to everybody but remain calm and decisive when navigating unmodellable circumstances in unchartered territory. The decisiveness of the central government during Covid is being rewarded — any death is a tragedy but our death rates are amongst the lowest. The calmness of the finance ministry is being rewarded — GST collections are at record levels and government borrowing costs have not exploded. Meanwhile, structural change is starting to yield results. Income tax return filers increased to 6.48 crore in 2020 from 3.31 crore in 2014, FDI topped the world this year, foreign exchange reserves are at a record high, digital payment growth rates lead the world, and individuals paying social security increased more between 2014 and today than in the 40 years before that.

Most Indians agree that our economic status quo since 1947 — and 1991 — hasn’t always led to an infrastructure of opportunity that is blind to your pin code or parents. Most also acknowledge that a welfare state needs to be funded by taxes from the growth and prosperity of our citizens, enterprises, and economy. India is changing its economic status quo. This budget reflects policymaking that is prudent, risk-taking and ambitious. More importantly, when seen with the three Covid mini-budgets and seven previous annual budgets, it reflects policymaking that is iterative. As poet Sohanlal Dwivedi wrote, “Koshish karne waalon ki haar nahin hoti (Those who keep trying, don’t lose).”

This article first appeared in the print edition on February 2, 2021 under the title ‘Continuing the change’. The writer is with Teamlease Services

Budget 2021 fails to give priority to boosting jobs