How two field-level officers stood up for Bilkis Bano

When the executive becomes deeply aligned with an authoritarian ideology, most of us bow down. Yet, neither the investigator nor the judicial officer got swayed by unscrupulous elements or improper pressures to ‘go soft’ on the convicts. 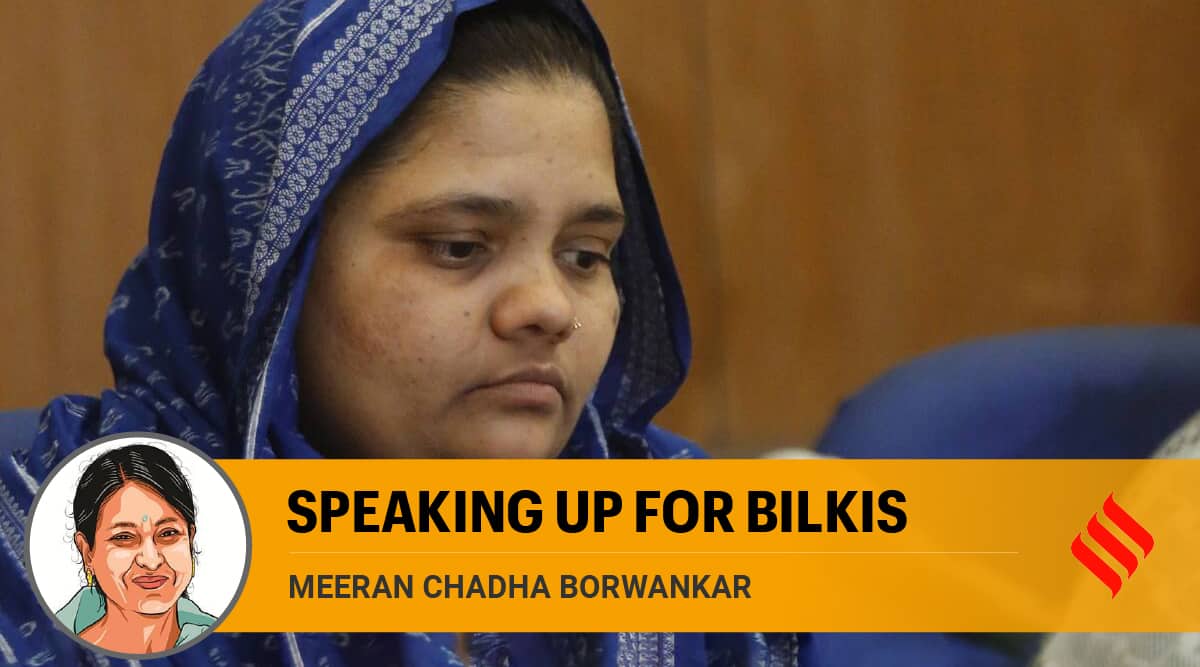 "The developments in the Bilkis Bano case are a wake-up call for all of us," writes Meeran Chadha Borwankar. (Express file photo by Bhupendra Rana)

When the crust skids, slides and drops, the base may try to hold on. That is the lesson from the developments in the Bilkis Bano criminal case.

In March 2002, Bano, five-months pregnant, her three-year-old daughter and extended family were accosted by a mob that gangraped her and murdered seven of her relatives, including her child. The trial resulted in a conviction that was applauded as a rare case of exemplary investigation and a well-conducted trial.

Recently, when it came to the premature release of 11 convicts in the gruesome crime, both the Superintendent of Police Central Bureau of Investigation (SCB) Mumbai and the Special Judge (CBI) City Civil & Session Court, Gr. Bombay raised objections to letting the murderers and rapists out of the prison. SP Dahod and the district magistrate of Dahod, jail superintendent Godhra, jail advisory committee, additional director general of police, prisons and correctional administration, home department of Gujarat and the Union Ministry of Home Affairs recommended their release except in the case of one convict where there was a difference of opinion among the processing authorities. The welcome the convicts received outside the prison has naturally caused uproar across the country. Questions have been raised about the soft treatment of offenders involved in heinous crimes like mass murder and gang rape. The developments have also raised concerns about the criminal justice system getting influenced by political rather than professional considerations.

In the surcharged atmosphere, it comes as a pleasant surprise that neither the investigator nor the judicial officer got swayed by unscrupulous elements or improper pressures to “go soft” on the convicts. When the executive becomes deeply aligned with an authoritarian ideology, most of us bow down without a whimper. Yet, these field-level officers stood their ground stoutly: They deserve a salute from all of us.

I can understand the onerous task that the CBI team must have faced investigating the complex case of murder with gang rape. We are aware that initially the criminal case was neither registered nor taken to its logical conclusion. Instead, it was supposed to have been “closed” by the Gujarat police. Having supervised cases of rapes and murders, I am fully conscious of how crucial the first few hours of investigation are, and how damaging the delay can be. Most citizens are not aware that by the time such offences are transferred to the CBI for investigation, the golden hours of evidence collection are long past. Yet, there is a clamour for CBI investigation notwithstanding its status of being a “caged parrot”. In the Bilkis Bano case, the Bureau took over the investigation months after the local police were alleged to have “covered up the crime and tried destroying crucial evidence”. The SC transferred the case to the CBI only in December 2003 — the gruesome massacre had taken place in March 2002. Despite the delay, an honest and transparent investigation of the case ensured that 11 of the accused were convicted. The trial was conducted outside Gujarat at the request of the CBI.

Political Pulse |As Bilkis Bano goes to SC, BJP Godhra MLA keeps out any reference in his campaign

Trial within the state is itself an onerous task with the accused pressuring witnesses even to the extent of purchasing them. But to pursue it in another state and to ensure the presence and deposition of witnesses in the court involves a rare commitment. That the investigating team could achieve conviction in this complex case in a very hostile atmosphere is an honour that the Bureau should be proud of. The special judge in Mumbai heard the case and analysed the material on record and his judgment was meticulous to withstand the scrutiny of the Bombay High Court and the Supreme Court. It shows judicial excellence at the sessions court level, which is often accused of lacking rigour.

Whether “good conduct” is reason enough for letting out the 11 convicts is being reviewed by the highest court of the land.

Meanwhile, many of us are troubled that even after jumping furlough and parole at various intervals, the convicts could earn the badge of honour of “good conduct”. Jail Advisory Boards being shadows of the political parties in power and the criminal justice system being sabotaged so brazenly and at different levels, is disturbing.

However, what gives me immense pride is the fact that an SP and a special judge of the sessions court retained their independence of thought. And that they chose to exercise it for the safety of women and society. The fact that these officers stood their ground should make all Indians proud. It also shows that we need to build institutions and get rid of our obsession with individuals, however charismatic they may be. When a trusted individual fails us we have no remedy but to lament. But when an institution starts collapsing, there are a few who hold the ground till concerned citizens wake up to prevent it from crumbling. The developments in the Bilkis Bano case are a wake-up call for all of us.

The writer, a retired DG of police, has worked in the CBI

RITES proposes setting up of unified transport authority for the Tricity