Politicians know the power of the visual. Hence, the arrest of cartoonist Bala The cartoon then and now is far from silly and no-one knows this more than the Tamil politician.

Thirty years back Tamil Nadu sent another Bala to jail over a cartoon. Balasubramanian, editor of the popular weekly Ananda Vikatan, was sentenced to three months rigorous imprisonment by the speaker of the assembly. Lodged as a B class prisoner, the editor’s crime was publishing a cartoon that showed two passersby commenting on a political gathering. “The one who looks like a pickpocket is the MLA and the other like a masked dacoit is the minister,” went the gag. The Madras High Court finally ruled in favour of the editor.

Now it is the turn of the cartoonist himself to be arrested. You have no-one to share the blame if you cause offence in the unedited social media. Digital India gives its creators freer access to the public and no less to the prison. Worse, unlike the higher artistic creators, the cartoonist gets a demeaning defence, which hasn’t changed in all these 30 years: Why prosecute the guy? Overlook the silly/tasteless cartoon and move on.

The cartoon then and now is far from silly and no-one knows this more than the Tamil politician. Given its long political history intertwined with cinema, the state should top the visual literacy chart. Whenever the visual image gets even remotely dented, the authorities here are quick to react. More than free speech what hurts in these parts is the free picture.

The Bala cartoon had nothing of the camouflage of the older Vikatan one, which stuck to generalities and depicted no specific personality. The current one pulls no punches and leaves little to imagination. You can see the Nellai (Tirunelveli) district collector, the police chief and the chief minister himself — all three barely clothed. It is one thing to say the emperor wears no clothes, quite another to show it.

The cartoon also alluded to physical attributes — legislators looking like criminals but did so in so many words. Bala’s work on the other hand is wordless barring the labeling of the three characters in it, helpfully in English. This powers it further. It cuts across languages and given the multiple tweets and FB posts following the arrest, should go places. Frustrating for the authorities but reassuring for the cartoon watcher.

The early Tamil cartoon was actively promoted by the language’s legendary poet, Subramania Bharati. When he was editing the Tamil weekly India from 1906 to 1910, first from Chennai and later in exile from the French-ruled Pondicherry, the staunch nationalist deployed cartoons lethally. There are stories of him personally supervising the cartoon making, often posing for the artist to demonstrate the gestural thrusts he wanted. Subsequently, like other Indian languages, Tamil produced an array of political cartoonists powered by the freedom struggle and gag cartoonists who held forth on a society challenged by the Dravidian movement.

Over the years, however, Tamil cartooning seems to have lost steam. It doesn’t have anything like the patronage the cartoon enjoys, say in neighbouring Malayalam media. Kerala’s contesting fronts led by the CPM and Congress are tempered by coalition partners while two dominant single parties run Tamil Nadu. Between the overbearing Dravidians, cartooning space has shrunk.

Now, Bala has challenged the stagnation with some disruption. His cartoon’s explicit content as much as the Photoshop-aided toning is very much in line with best practices globally. The frame is still basic but could head in the direction of the British cartoon revived by ruthless visualisers like Ralf Steadman and Gerald Scarfe, both sharp at 81. Between them they led the way for a succession of merciless artists. You can google and find Prime Minister Theresa May in unenviable avatars set in increasingly painterly life-like backdrops that highlight the
contrasting caricature.

Closer home, Bala jogs our recent memory by bringing the local authorities into focus. When Perumal Murugan was under organised attack, the district administration negotiated his exile. When the dispute is between individual rights and group interests, officials directly in charge seem to routinely side with the latter. If the courts don’t reverse this default setting, particularly in the case of an everyday art like the cartoon, it will go up and up into the unbridled cyberspace. The editorially validated news spaces, newspapers and websites, will become cartoon-mukt. 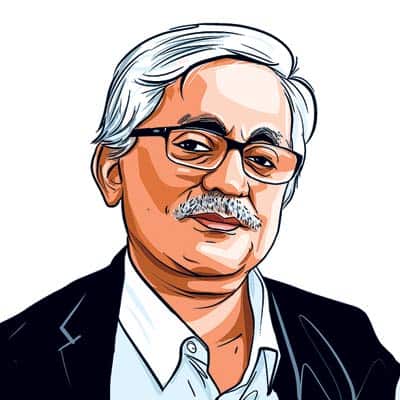