The COVID-related pressures and the unfortunate border tensions with its largest import partner, China, present a rare opportunity for India to reinvent itself, economically. Buyers shop for consumer goods tagged as "Swadeshi" (made in India) and Videshi (foreign-made) printed in the Marathi language at a store in Pune. (Express photo by Ashish Kale)

COVID-19 took very little time to spread across the world economy. International trade has been constricted and global supply chains have, by and large, been disrupted. Each nation has been left to fend for itself. India’s dependence on other countries has been exposed in several areas. The country should now refocus on manufacturing, and be self reliant.

Prime Minister Narendra Modi gave a call to fellow Indians to be “Vocal for Local” in May. This essentially means, as PM Modi explained, not only to buy and use local products, but to also take pride in promoting them. The Centre announced a well-considered programme, the Atmanirbhar Bharat Abhiyan (ANBA), as part of the post-pandemic economic revival package. Rs 20 lakh crore (10 per cent of India’s GDP) was earmarked for the purpose.

I see self-reliance as a synonym for self-esteem. Only a self-reliant nation can serve the diverse needs of its population and provide them with choices. A content nation can also contribute to the welfare of other counties with a sense of self-pride. The COVID-related pressures and the unfortunate border tensions with its largest import partner, China, present a rare opportunity for India to reinvent itself, economically.

Opinion | To remain globally competitive in a post-Covid world, India needs to focus on skill, scale and speed

There are, however, serious apprehensions keeping in view the country’s $65 billion worth of imports from China alone. Most of these imports are of essential items — raw materials, components and intermediates required in producing finished goods by a large number of enterprises across several sectors, including MSMEs. For example, the pharmaceuticals sector imports nearly 70 per cent of its raw material and drug intermediates.

There is thus the justifiable question: Is the thought of reviving the local born out of unrealistic enthusiasm? Of course, it may not be feasible to replace all Chinese imports in the near future. It may also be debatable if the end goal is to replace the entire chain of imports from a country. Moreover, as some economists apprehend, a populist demand for dumping all that is of Chinese origin, may be forgotten soon. Nevertheless, experts and industrialists do assert that the ANBA is an excellent initiative and gives India the opportunity to embark on the self-reliance drive .

A major part of the Vocal for Local mission rests on the MSMEs. These enterprises have, by and large, been seen as struggling for survival. But the reforms announced as part of the ANBA — collateral free credit, expanding the scope of the sector, an online market place exclusively for it, the proposal that governments will pick up equity stakes in enterprises that show growth potential — should put them on a stronger footing.

Opinion | Self-reliance is about resilience and decentralisation, not isolationism

One immediate fallout of these measures will be creation of large scale employment opportunities for both the skilled and unskilled workforce. A stronger manufacturing base will also lead to positive spinoffs related to the supply-purchase of local raw material and capacity building of allied manufacturing units.

There are many other things going for the ANBA. It has a well-defined charter. The scheme has met with little criticism. Indeed, a number of Opposition leaders including chief ministers of a few states have supported it. There seems to be no shortage of political will to execute the mission. Even, then implementing the reforms would require innovative ways to overcome day to day obstacles and challenges.

Here I offer a few broad suggestions to take the mission forward systematically, and in a spirit of accountability. First, an umbrella action plan should be drawn by the Niti Aayog listing all possible categories of targets under the ANBA and the Vocal for Local Mission. A monitoring agency will review and suggest course correction to ensure that no delay is allowed to build.

Second, each state/UT will develop an action plan in consonance with the umbrella plan — with a similar agenda and a robust mechanism. A separate organisation created by each state will be responsible for the implementation of the action plan, as well as running all related operations on a day-to-day basis. It will also conduct regular studies to identify local and global market trends and invite competitive solutions to meet market demands. Third, each district (or a group of districts) will work out a more detailed action plan, and charter of responsibilities for ground level officers and departments.

The district action plan should incorporate the setting up of certain bodies/groups. First, an autonomous authority to be headed by an additional DM or a technocrat to manage and pilot the implementation of the listed measures on ground, and be solely accountable for timely delivery. Its other important targets will include scaling up and setting up of a certain number of companies/ industries/manufacturing units over a fixed time period. The authority will also set up a 24X7 facilitation centre to help the existing and the newcomer companies and resolve their doubts and disputes. This agency will also be responsible for creating public awareness amongst all stakeholders.

Another group in the district authority will be tasked to lay out detailed norms and guidelines on safe working conditions in each sector. It will be responsible for matters related to workers’ families welfare, particularly in respect of health, education, and decent civic conditions.

The ANBA is a mission to empower the people of India. It is like a “yagya”, to be performed in that spirit of purity, not only by the executive machinery but also by the people in placing their faith in the spirit and mandate of this mission. It will in all likelihood become a benchmark of how governments and their various organisations can work in a mission mode.

This article first appeared in the print edition on September 21, 2020 under the title ‘Self-reliance for self-esteem’. The writer is an IAS officer. Views expressed are personal 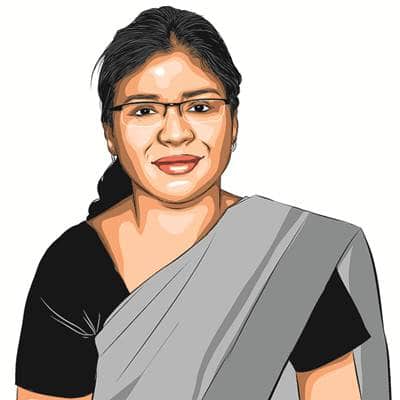