The alarming, exponential reach of the ‘anti-national’ can find you out in the most unexpected places. JNU Students shout slogans against the issue of Anti National slogans came out in the new, in New Delhi on Saturday. Express photo: Praveen Khanna)

One would have thought that the home minister of India had more important things to attend to than to concern himself with a student demonstration on a university campus. However, he found the time to take a personal interest in the matter and, forestalling the response of the university administration itself and ignoring old-fashioned considerations such as institutional autonomy, weighed in with all his might. He sounded sombre, almost Churchillian, on the eve of the Battle of Britain — “We will fight them on the beaches…”. The police commissioner of Delhi took time out from other important business, such as harassing the AAP government, and sent in his cops to arrest the president of the JNU students’ union for a somewhat obscure offence — chanting “anti-national slogans” though, apparently, he was merely present when “anti-national slogans”, whatever they be, were being shouted by some disaffected Kashmiris who, heaven knows, have sufficient cause to be pretty disaffected. The slogan-shouters are to be charged with “sedition”, no less.

The foundations of the Indian state are endangered by the raised voices of a few Kashmiris — in Delhi. (Parleying with the PDP in Srinagar is another matter.) Earlier recipients of the charge of sedition, not excluding a certain Gandhi, might well feel slighted in retrospect — but with inflation all around, one can hardly expect the prosecutors to lag far behind. All this would be farcical — suitable material for a light Gilbert-and-Sullivan operetta — if it were not ominous.

The design is pretty obvious. A flexible combination of street violence (the ABVP, Bajrang Dal, etc), certain provisions of the penal code (Sections 153, 295, etc), and a compliant police administration, is deployed in order to silence all expression of dissent, and to destroy the institutional locations where critical ideas may be aired — and maybe even shouted. Between easily hurt “sentiments” and the ever-present threat of public disorder, which can be produced on demand, and the ease with which all manifestations even of scepticism, let alone dissent, are being dubbed “anti-national” — still, was hanging Afzal Guru in order to satisfy the justifiably outraged collective consciousness really right, your honour? — the brief pre-election “debate” about imminent fascism appears, well, naïve. Somewhat surprisingly, the semi-literate but still honourable human resource development minister — how “semi-” is a matter of some uncertainty — has even yoked her Saraswati to the cause of her “nationalism”. (Mine is still playing the veena.)

But perhaps it is time to reframe K.C. Bhattacharya’s famous question: “Is there an Indian way of fascism?”

It is time that the home ministry published a list of all the things that must not be said, or seen — or, apparently, even heard, like “anti-national” slogans.

The most sacred is, of course, the sacred cow. But almost nearly as sacred is Prime Minister Narendra Modi — because, one gathers, that being critical of him was the “offence” of the boys of the Periyar Study Circle at IIT Madras. Rohith Vemula’s “offence” has been rather obscured by the pious platitudes prompted by his suicide, but it must have been pretty dire for a Union minister to have declared him “anti-national” and hounded him, via the compliant administration, to his heart-breaking end.

I need guidance, hon’ble minister. I understand that one mustn’t see — or even try to see — Muzaffarnagar Baqi Hai, but may one at least say that one mustn’t see it? Likewise anything by Anand Patwardhan and anything to do with Kashmir, as the innocents at IIT Delhi discovered. How about the Northeast? Is it alright to say that Afspa is not wildly popular in Manipur? The alarming and exponential reach of the “anti-national” can find you out in the most unexpected places.

I realise that this “design” — plot, strategy — is not always apparent in the metropolis. But I was unreassured by Swapan Dasgupta’s remark at the Kolkata Lit Fest that barring a few “regrettable” incidents — like the murder of Akhlaq — there was no real climate of “intolerance” — that is, hysteria about hunting the “anti-national” — being built up in the country. Unfortunately, I was present at the Allahabad University campus when Siddharth Varadarajan made his visit to call on the vice chancellor and thank him for his invitation, later withdrawn under pressure from the ABVP. Not inside, where Varadarajan was being held hostage, but outside, where the outraged “nationalists”, the hostage-takers, were swarming. I obviously don’t look right, because I was also attacked, despite my advanced years — attacked verbally, I must add, and accused of having ruined the country for five thousand years (I am not quite that old) — and being told angrily that the uncouth “nationalist” would not allow me and my kind to do so anymore. Very reassuring.

Satish Deshpande has written urgently about “The Death of the public university” (The Indian Express, February 1). The public university, accessible to all — unlike the private enclaves of the elite, where people who have plenty of money learn how to make even more money — is a necessary institution in a society that is in the throes of a deep social transformation. It is the necessary place where the ideas thrown up in the process — often contentious, often wrong — are articulated and examined: Caste, gender, sexualities, even fascism. Deprived of such a public arena, these ideas will migrate, go underground, mutate. That, honourable ministers, is truly dangerous. We can’t all only be doing “Saraswati Vandana” all the time — the goddess demands other, sterner forms of worship too: At the very least, a certain minimal commitment to ideas, rather than the pathological fear of ideas manifested by the “nationalists”.

I have only one disagreement with Deshpande — that “death” looks a lot like “death by design”, aka murder. 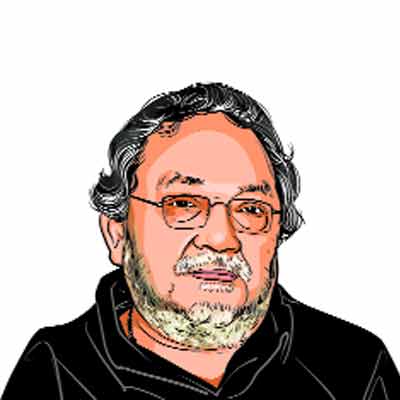