Jean Drèze’s question ‘Is Aadhaar voluntary or compulsory?’ is disingenuous.

Data shows a dismal 3% coverage of children in age group of 0-6 years. Machines have been shifted from citizen facilitation centres to anganwadis.

Is the voter identity card mandatory or voluntary? A rhetorical question whose answer best captures the intricacy and subtlety of policymaking in India around identity and eligibility. As per the Election Commission’s order, if you are provided with an electoral photo identity card (Epic), it is mandatory to produce that card at the time of voting, failing which the EC can deny you the right to vote. If you are not provided with an Epic by the EC, you can submit one of 11 types of acceptable proofs of identity and vote. But merely possessing an Epic does not entitle you to vote. You have to be registered as a voter in the voter list and furnish proof of identity to vote. The EC also claims that more than 97 per cent of all registered voters in the country have been provided with an Epic. So is the Epic voluntarily mandatory? Or mandatorily voluntary? If this sounds facetious, so does the article ‘Unique identity dilemma’ by Jean Drèze (IE, March 19).

Phrases in Drèze’s article such as “ace promoter” and “business guru” apart, the core argument is one of transitioning from an inefficient administration to a more efficient one, without suffering social losses of exclusion during this transition. “Is Aadhaar voluntary or compulsory?”, framed as a question in the binary context, is simply disingenuous. This was never a choice in the Aadhaar construct, and its only option was to be non-compulsory.

Aadhaar was conceived as a multi-purpose identity since its inception. Hence, it could never have been compulsory, by stealth or otherwise. A yet-to-be-launched identity card could not have been made compulsory for an existing programme like the MGNREGA or PDS. If it had to be compulsory, Aadhaar would have been a programme-specific identity (of which we have hundreds), and not a generic multi-purpose identity card. So, contrary to the allegation in Drèze’s article, there was no “tacit understanding” behind a façade of Aadhaar’s voluntary nature.

The real concern and apprehension is one about the exclusion of beneficiaries in the transition from a non-Aadhaar regime to an Aadhaar regime for an existing welfare programme. There are plenty of examples in India’s administrative history to learn from, such as the EC’s move from a non-voter identity era to an identified voter regime to curb bogus voting. The availability of choice between the old and the new options for a beneficiary is the cornerstone of such transitions. As long as Aadhaar penetration is not 100 per cent, for an existing programme, the choice of both Aadhaar and non-Aadhaar identities needs to be made available to ensure the non-exclusion of beneficiaries. However, for a new welfare programme to be launched, Aadhaar as a prerequisite is a design prerogative of that programme. Also, since the programme is new, arguments of exclusion due to transition will not arise.

The article also cites four “dangers” of Aadhaar, all of which are neither new nor cogent. There is the usual paranoia being stoked about a tyrannical state stripping its citizens of all privacy rights through the Aadhaar tool. The Aadhaar database contains name, biometrics, date of birth, gender and address. In no way does it enrich the devious desires of anyone to violate privacy and snoop.

That there is no law for redress against private information abuse is a legitimate argument. But that is an overarching problem in India, one that applies as much to bureaucrats using Google’s email facility for most of their executive functions as it does to Aadhaar. It needs to be addressed by legislating a right to privacy act.

Moreover, Drèze’s point about Aadhaar’s technology being inappropriate is akin to arguing that one dropped call on a mobile phone is enough to render mobile phones useless. Aadhaar’s biometric technology has been tested and proven to be more than 99 per cent reliable, perhaps the best available in the world today.

Finally, the article lists the non-universality of Aadhaar as a danger, making it sound as if we should have either 100 per cent Aadhaar or none. That is an argument with a recursive error. Aadhaar coverage in the country is expanding at a furious pace, with the Narendra Modi government having stepped up average daily enrolments to 7.2 lakh from the 3.2 lakh that the UPA 2 government demitted office with. That we need to transition from a leaky welfare state to a more efficient service-delivery framework is indisputable. That we need to transition without any collateral losses of exclusion is incontestable. But to cloak the Supreme Court ruling directing the state to ensure that no citizen is denied her benefits in a “compulsory or voluntary” Aadhaar rhetoric is just being flippant.

The writer is a former member of the Unique Identity Authority of India and founding trustee, IndiaSpend, India’s first non-profit data journalism initiative. 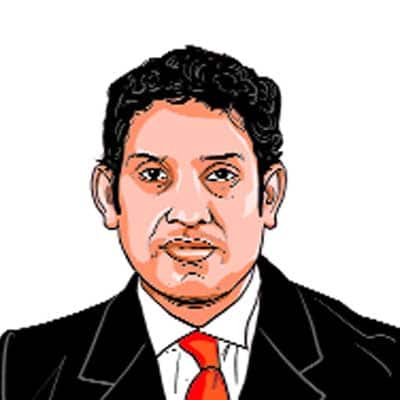